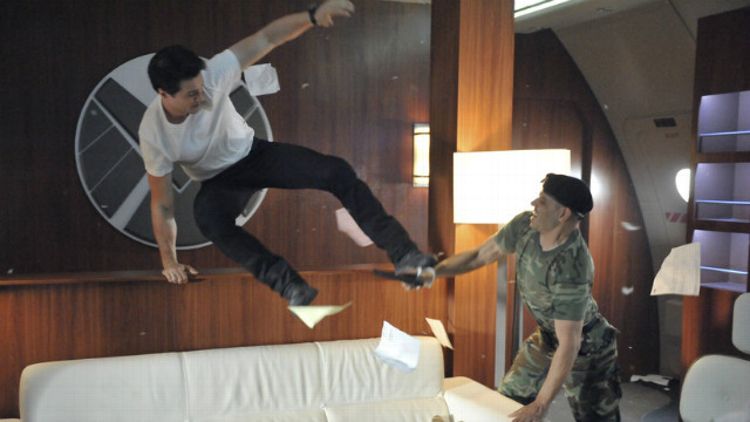 When ABC announced the pickup of Marvel’s Agents of S.H.I.E.L.D., its first co-branded superhero series, the challenge was clear: how to bring a grounded — and less expensive! — point of view to a high-flying cinematic universe. After four weeks, it’s safe to say that S.H.I.E.L.D has managed to accomplish that and only that. The show has taken a world in which Norse thunder gods and armored billionaires soar through the skies and made it as compelling as a commuter flight to Albany.

(This is probably as good a time as any to mention that ABC and Marvel are, like Grantland, owned by the Walt Disney Company. We now resume our regular programming.)

That S.H.I.E.L.D. should be struggling creatively isn’t necessarily a surprise. (It also doesn’t much matter. Thanks to its pedigree, the show is the highest-rated new series of 2013 and has already received a full-season order.) Comic-book stories are never easy to translate to the small screen and the difficulty only increases with an unprecedented project like S.H.I.E.L.D. It’s an hour that needs to serve multiple masters, both creative and financial. The series is officially “canon” in a brave new storytelling context where that actually means something: Anything shown onscreen has to sync up with blockbuster Marvel films, even the ones yet to be made. With billions of future dollars at stake, S.H.I.E.L.D.’s creative process is almost necessarily more about the boardroom than the writers’ room. This means that the late-night, cheap takeout–fueled inspiration that has led to some of scripted TV’s most indelible moments won’t be happening here. What’s worse, an exploration of the Marvel U’s most fascinating corners — like Wakanda, say, or the Savage Land — is also unlikely. Why burn something on a random Tuesday night in October when there’s a chance of blowing people’s minds with it on a summer weekend in 2019? Even with the familial connection to Avengers godhead (and S.H.I.E.L.D. executive producer) Joss Whedon, husband and wife showrunners Jed Whedon and Maurissa Tancharoen are saddled with a great deal more responsibility than actual power.

The weakest parts of Avengers were all the budget-saving scenes on the helicarrier when our caped crusaders stood around talking about doing things instead of actually hulking out and doing them. And these moments seem to have been the primary inspiration for S.H.I.E.L.D. The pilot, at least, was elevated by Joss Whedon’s Pop Rocks dialogue and what is essentially the best part of any caper flick: the zippy, international montage devoted to putting the band together.

Now that we’ve had a few weeks to see said band in action, the results aren’t pretty. Clark Gregg is a likeable actor stuck playing a two-dimensional part; you can get away with being the guy who knows everything but says nothing when you’re the seventh lead in a movie, not so much when you’re the focal point of a series. Other than his abs, the most developed part of Brett Dalton’s Agent Ward is the unique way he tucks his T-shirt into his jeans. The notion of our POV character being a “hacktivist” named Skye who tosses away her commitment to transparency and social justice after her first plane ride is ludicrous enough — it’d be like Edward Snowden turning state’s witness after being handed a plastic sheriff’s badge — but Chloe Bennet plays her like a lifelong Daphne going undercover as Velma. And I can’t decide which is more inscrutable: the character of Melinda May, a stoic, kickboxing leather fetishist, or the choices actress Ming-Na Wen has made to play her. Did she use a piece of cardboard for reference? Or perhaps just a very smooth river stone? (My latest theory is that she’s actually a CBS double agent trying to bring down the show from the inside. Fight the real hacktivist!) Only wide-eyed Brits Iain De Caestecker and especially Elizabeth Henstridge — as the resident Geek Squad Fitz and Simmons — seem to be having any fun, perhaps because they’re the only ones who have thus far been allowed to have any.

Before it launched, S.H.I.E.L.D. seemed like a sure bet because, unlike the event-driven Marvel movies, the spy agency provided a focused, procedural-ish framework for a weekly TV series. (That, in 2013, it should be trying to get us to root for the goons in the black helicopters rather than those trying to shoot them down is another matter entirely.) Better, it would concentrate on real (or real-esque) people who fell a few clicks down on the power scale from Galactus or even Cypher. Which makes it all the more ironic that the biggest problem with the storytelling so far is its omnipotence. At this point, S.H.I.E.L.D. stories can theoretically be about anything — sexy revolutionaries in Latin America, forced robotic eyeball surgery in Belarus, Ian Hart’s terrifyingly insane accent — which is really a fancy way of saying they’re about nothing. Just because Agent Coulson has Thor’s cell phone number doesn’t make him the ideal chaperon to a radically changed world. If we’re not rocketing with deities, better to be pounding the torn-up pavement below than stuck hovering somewhere in between. A more grounded, personality-driven superhero show based on Brian Michael Bendis’s Alias (which actually almost happened) or Matt Fraction’s Hawkeye would have the nimbleness that the lumbering S.H.I.E.L.D. woefully lacks. A group of inoffensive meddlers schlepping from place to place isn’t a compelling series. It’s Scooby-Doo.

It’s too soon to write the series off entirely. For one thing, Whedon shows, even Whedon-esque shows like this one, often taken time to find themselves. (Pity the odd, interesting series like Dollhouse that have been cancelled before completing their search.) And S.H.I.E.L.D. is the rare ambitious project that will be given all the time in the world to figure it out. There were a few passing moments in Tuesday’s “Eye-Spy” that suggested a winking swagger necessary to keep the show’s well-oiled, case-of-the-week machinery from putting audiences to sleep. (I liked the creepy Swedish subway masks. The tough, sexy Pascale Armand should be added to the team immediately. And it’s a win anytime FitzSimmons are stuck, snackless, in the field.) But for a show that promised a deep dive into the gaping holes of possibility opened by a decade of Marvel movies, S.H.I.E.L.D., for now, feels dispiritingly like profit-generating spackle.