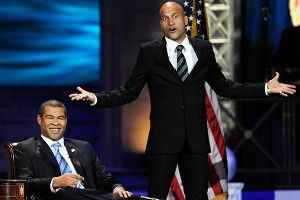 The way this works for pop culture professionals: First, Obama wins reelection; second, everyone figures out how to make jokes about it. Karl Rove’s instantly infamous Fox News performance last night, in which he attempted to wage a mutiny after the network called Ohio for the President, should be good for some fodder. Donald Trump’s live-tweeting of the election, during which he suggested, um, marching on Washington, will definitely get some laughs for someone somewhere.

We can fully expect a torrent of jokes from all sectors about what kind of crazy rich-guy stuff Mitt Romney is going to get into now that he’s not running for anything (heli-croquet? high-stakes “Tying a Tennis Sweater Around Your Neck” competitions? etc.). And surely, many will be tuning in to SNL this weekend, which is brand-new with Anne Hathaway hosting and Rihanna as musical guest, to see how Seth Meyers’s team handles the proceedings (Anne, Ri: Can either of you do a decent Shepard Smith impersonation?) But for now, the winner in the “be the first to make jokes about Obama winning” is Comedy Central’s Key & Peele, which unleashed a saved-up sketch about the Prez, his anger interpreter Luther, and the return of one glorious early ’90s dance phenomenon. Congrats, you two: Your punctuality has served a nation well.