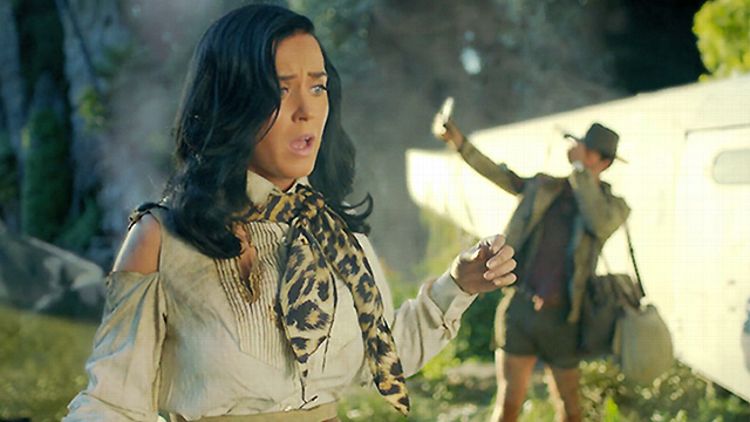 Although Katy Perry had a prestigious show-closing spot at the VMAs, her much-hyped outdoor performance of Prism’s first single, “Roar,” ended up being pretty anticlimactic. The apricot vinyl twerkery of one Miley Destiny Hope Cyrus monopolized the entire VMA news cycle, with a couple of spare words sprinkled in for the ‘N Sync reunion. Barely a word of post-show watercooler chatter ended up being devoted to Perry, which is pretty amazing considering she jumped rope in a leopard-print sports bra. But there were no memes or GIFs of Perry jiggling on things, no arguments that her notorious performance was taking attention away from more serious issues. Perry played it relatively safe, and “Roar” is a huge hit worldwide, so there’s clearly not much reason for her to tamper with the sugar-sparkle-sunshine formula she perfected on Teenage Dream.

Some of us are disappointed by Perry’s false promise that her fourth album would be “real fucking dark” (KATY LIED!), but let’s face it, no matter how many rumored M83 collaborations are on deck, Perry is never going to be The Knife. She’s going to be Katy Perry: pineapple princess, cupcake queen, a heart of pure gold in a Playboy pinup body. She’s not edgy, she’s curvy, and that’s just fine too. The current pop landscape has too many people trying to be edgy, when sometimes all a star needs to deliver is a catchy song and a video that comes out on schedule. While Lady Gaga blathers on about the meaning of ARTPOP and Miley tells the world she’s “messed up” in the head, Perry keeps it moving with a promo cycle of emoji lyric vids, giant reflective trucks, and friendly non-desperate tweets to fans. When coolness gets too corny, maybe corniness is the ultimate in cool.

After her divorce from Russell Brand, Perry told The Sun that “You’d never see my face because my hair would be in it” for her next album, but despite the mall-goth vibes of the “Roar” teasers, “Roar” itself is anything but. There’s also no sign yet on the album track listing of “Bad Photographs,” the song Perry previewed for her Vogue interviewer, about John Mayer and how pictures of all the happy times can be a false representation of a more complicated relationship. Perry might have shelved all of her less-than-flattering songs about Mayer once he took her back, but damn it, I was interested in hearing them. Given Perry’s dyed-black Warped Tour roots, her affinity for Alanis Morissette, and the fact that she’s written several bitter revenge songs about exes in the past, we were hoping for Perry’s own “You Oughta Know” about Mayer. But I guess she’s going to bite her tongue and hold her breath and hope Mayer rewards her patience, loyalty, and silence by putting a ring on it. But man, I want to hear “Bad Photographs”!

We don’t have “Bad Photographs,” but we do have “Roar,” and the video, released Thursday and set in a pan-geographic jungle where Perry doffs her explorer gear for a Bettie Page jungle-girl top and skirt of leaves, is a very literal interpretation of the song’s lyrics about gaining strength and independence.

Except for a distracting whole-body orange spray tan, her makeup is more natural than usual for a sworn fake-eyelash junkie. There are jokes about selfies, some overzealous mugging, and a bunch of adorable trained animals. Perry’s incredible Vargas girl body is displayed to its best advantage, and there are mercifully few pauses for story exposition. The whole concept of Tarzan is historically problematic, but given the ingrained racism of the “jungle girl” genre, I was expecting something worse. This is at best cute, at worst boring. It’s a little bit of both, really. It mostly reminded me of ’90s Euro-pop cheesefests “Tarzan & Jane” by Toy-Box and “Dr. Jones” by Aqua, with a smattering of the big-budget video Cassandra makes in Wayne’s World.

I’ll hold my breath and clutch a velvet choker in hopes that second single “Dark Horse” will deliver the witchy factor that “Roar” promised in its promos, but it looks like Perry’s new era may turn out to be not so different from her last one. Why mess with road-tested success just because everyone else is grasping at the moment of Tumblr trends? Perry knows what works for her: a monster hook and a supportive bra. Maybe we’d prefer an angst-ridden Perry, but why would she? At her core, she is clearly a creature of optimism, sweetness, and light. Anger might have brought us fan favorite “Circle the Drain,” but infatuated love gave us her best song, “Teenage Dream.” We should all be so happy, living in a peaceable kingdom with our animal friends.