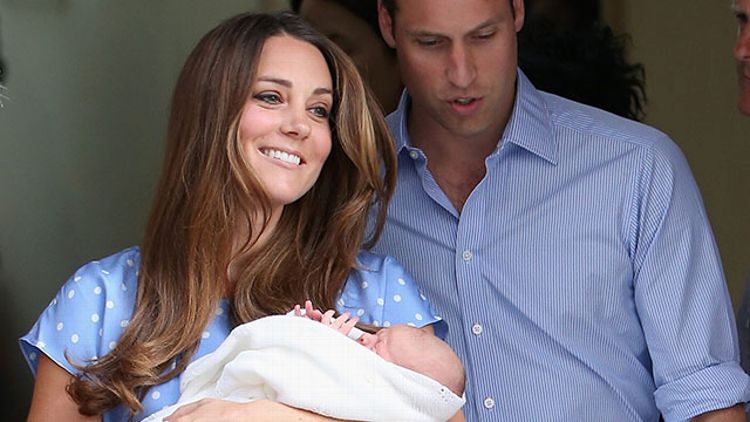 Kate Middleton & Kim Kardashian Raising Children Alone: “They may seem to have it all, but with absent partners and no homes of their own, both Kate Duchess of Cambridge and Kim Kardashian are struggling with motherhood.” And their names both begin with K! Both ladies are “alone, as their international icon baby daddies, Prince William and Kanye West, step out without them, partying it up with pals and heading back to work, away from the nest.” Kate and William moved in with Kate’s parents, rather than hire full-time nannies. “The truth is, Kate wants this baby to grow up normal. No fuss, no bother and few servants.” LOL YEAH RIGHT. Will has escaped the house as much as possible, playing polo with his brother and fulfilling his duties in the Royal Air Force. “It’s all a bit too loved-up for him. He was thrilled to play first-time dad, but now he’s content to leave it to the ladies. He’s learned how to change a diaper, but like any action man, William is starting to feel he’s more use to the military.” What is an action man?

“Now Kate feels alone. She sometimes cries — partly out of joy, because she’s bonding with [baby] George, but also out of loneliness. She feels overwhelmed.” Her parents are “no substitute for her partner, her son’s father.” She also needs friends, as many of her old chums got cut out when she married into the royal family. Kim Kardashian is also living with her family in L.A.’s west Valley. Kanye is absent most of the time, “and work is threatening to pull him away from his new family with increasing frequency.” Despite Kris Jenner’s claim that Kanye never takes vacations, he went on a vacation that was a “business trip,” heading to Greece with Renzo Rosso. “Kanye’s jetting off caused friction with his stressed-out, shut-in girlfriend. Kim tries to pretend that her life is wonderful, but the truth is she has the baby blues; she feels extremely overwhelmed.” YOU’RE IN IT.

Misc/Etc: “Beautiful people can do very ugly things” “reportedly found to be alive and well” “has her ambitions set on snagging Hollywood’s hottest guys, not awards!” “Ladies, lock up your men!” “MUNN WON’T STAY MUM!” “She says Cher is long past her expiration date” “engaged in an epic battle of egos” “his music is angry and misogynistic” “Beverly Hills, 90210’s favorite son” “kept cool in a kicky fedora” “EMO TEEN” “Leonardo DiCaprio has wealth and fame and he can fly?” “He comes off as the most charming guy, but he always leaves girls heartbroken” “CLOSET CASE” “he always offers her a nice, yummy banana” “attempted to rock the grunge look and failed miserably” “looked borderline foppish” “DURR”

Beyoncé’s Haircut: “She didn’t want to hide behind her hair in real life.”

What’s in Ciara’s Purse? A tiny bottle of Tabasco sauce. I love Ciara.

Oprah on Acting in The Butler: “I had put the instrument away. But I chose this because it was a way to illuminate a time [the 1950s] when women suppressed their ambitions. I wanted there to be a frustrated energy about her. [If it had been me back then], I might have been sewing, then watching the soaps, then looking for a beer.”

Zooey Deschanel on Valley Girl Voice: “I am an intelligent person … It’s not that I can’t live in a world without the word like.”

Anna Gunn Remembers Deadwood: “I never knew if a stagecoach was going to come and run me down.”

Aaron Paul: “People go, ‘Will you please call my wife a bitch? It’ll make her so happy.'”

Amanda Seyfried & Justin Long: They are dating! Who knew?

Misc/Etc: “I bring my laptop everywhere” “then returns home to his ex” “MOM JAILED ME!” “I bought a rose, cuz ladies love that shit” “likes playing with this frog toy” “I carry stacks in rubber bands sometimes.” “Birds of a Leather!” “We tried to play basketball. It was a sad state of affairs” “She says ‘my husband’ and giggles a dozen times a day” “Every time she travels, she loves to come back with a fake accent” “Aloha to 38!” “I’m only relaxed when I’m on stage” “#wednesdayz” “Pimp My Injury!” “rested by the pool with pals and listened to tunes by The Kinks” “Her body was her thing” “It’s an honor, straight up, to be her boyfriend” “Chocolate Avocado Pudding” “Can a misogynist evolve into a romantic hero? Discuss”

Lamar Odom’s Mistress Urges Khloe Kardashian to Kome Klean: “Your fans and so many young women admire and look to you for strength. They deserve to know your marriage is not perfect.” Don’t cover it up and try to pretend everything is going great, because “He will continue to cheat on you.” Probably true. The Kardashians used Lamar’s iPhone’s GPS to “track his whereabouts.” Ahhh! “Khloe and her mother caught him with another girl before me. That’s why he went back to a BlackBerry.” Ahhhhhh!!! “He’s not a bad person at all. He’s just a man with a lot of money and power, and that’s what men with a lot of money and power do.” COOL!

Michael Douglas Keeps It Real: “I don’t go shopping. All my clothes are from movie sets.”

Drake on Amanda Bynes: “It’s a little weird and disturbing. It’s obviously a behavioral pattern that is way bigger than me.”

Chris Harrison Gets Real About The Bachelorette: “Let’s be honest. Most relationships don’t make it down the aisle.”

Jason Momoa: “I hate taking my shirt off.” TOO BAD.

Britney Is Sad as K-Fed Weds: “Britney Spears had made peace with the fact that her ex-husband Kevin Federline has moved on.” OR HAS SHE? He married girlfriend Victoria Prince in Las Vegas. “She knew it would happen. But it still stings.” She misses him a little bit too. “Kevin is totally different now than he was with Britney. He’s grown up a lot. It makes Brit sad that he matured with Victoria and not with her.” Why should I be sad? Heaven knows.

Katie Couric on the Prospect of Getting Married Again: “I’m not sure. Marrying me might be a challenging proposition for some people! But I think being married has benefits — it’s hard to walk away when you have that piece of paper.” After losing her husband to cancer in 1998, she is finally dating again. “I was happily married and really enjoy having a partner.” She’s now dating businessman John Molner after a few boy toys. “He’s successful and a little more age-appropriate.” She’s gotten “really into spinning.” She once went on a date with Bob Saget, who never called again. She also tried out Jeff Probst but says “He had puka shells on. That was weird.” She hates being called “perky” and wants everyone to stop. “Elves are perky. Leprechauns are perky. Quite frankly, it’s a little sexist. Also, the statute of limitations for perky has ended. It’s kind of hard to be perky at 56.”

Misc/Etc: “A good shoestring onion ring is as good as sex. So how good would sex be while eating shoestring onion rings?” “TOO OLD TO PLAY A STRIPPER?” “egotistical and overly earnest” “share more than blonde pixie cuts and secretive smiles” “shares a squint with her dog Mr. Chips” “My arms are getting stronger for the baby!” “All-Nude Edition” “Fans kept commenting on how beautiful she is” “They were having a serious conversation for a while. They barely touched each other.” “Duke couldn’t stop shoveling the cake into his mouth!” “Embrace Their Love Lbs!” “Prince, 55, added inches to his 5-foot-2 frame by wearing white satin heels”

The Bachelorette Aftermath: “Desiree’s heart is still with Brooks. But she’s going to move in with Chris anyway.” A foolproof plan! “Some are worried that she’s so obsessed with the idea of a wedding that she’ll just go through with it because she wants to be married so badly. She is a wedding planner and dress designer, so getting married is her biggest wish.” Nothing can possibly go wrong here! “She’s attracted to Chris and she really does have feelings for him, but it’s not that mad, passionate kind of love she had for Brooks.” You mean lust?

Kimye: “KANYE’S DAMNED IF HIS BABY WILL FALL INTO THAT WHOLE KARDASHIAN MACHINE.” Kim’s into it. “His possessiveness — it feels like love to her.” HEALTHY!

Lisa Rinna & Harry Hamlin 4Ever: “Husband Harry Hamlin threw her a Mexican/disco-themed birthday party” DID THE REST OF SC&P SHOW UP?

Kathie Lee on Dina Lohan: “Personally, my kids would drop dead before they’d let me go clubbing with them.” I’ll club with you Kathie Lee!

Misc/Etc: “POOR RIHANNA — SHE’S JUST SO SHY” “I was into my uniform of leggings and a sweater” “entire manufactured, stage-managed, famous-for-being-famous existence has been devoted to attracting attention to herself — being seen, filmed, photographed, in skimpy bikinis or haute couture” “I help her text on the phone, get whatever she needs in the kitchen” “listening to the music he listened to, eating the food he ate, and walking the way he walked” “Subtle as always, Queen Bey” “I love to dance, and I love disco” “It’s nice that he’s not an industry guy” “This guy took me to a Swedish House Mafia concert, and it was, like, 15,000 people that were so happy” “Heaps of spaghetti in any form. I just love twirling it!”