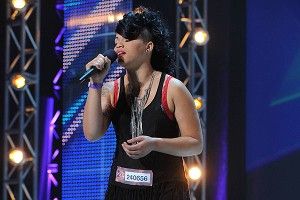 For reasons still not entirely clear to them, Grantland editors Jay Caspian Kang, Mark Lisanti, and Emily Yoshida have decided to track the second season of The X Factor. Take this magical journey with them; they could use the company.

On Day 4, the X Factor spaceship crash-landed in Greensboro, North Carolina, home of the University of North Carolina-Greensboro, the Greensboro Coliseum, and what used to be the only Krispy Kreme in the Triangle/Piedmont/Triad area. (Chapel Hill stoners, what up!) Along the way, we saw a good-looking, confident 17-year-old dude from Louisiana who — gasp — was a black singing cowboy, some more mean girls, and Demi Lovato’s plasticine eyebrows, which look like they came out of a Happy Meal. Again we watched Simon, L.A., Demi, and @britneyGWARface overhype genuinely mediocre auditions. Again we smelled the farts of what has been a truly disappointing start to Season 2.

Kang: OH HOLY SHIT IT’S A BLACK COUNTRY SINGER! (Seriously, how many times have we gone through this?) THE MULTICULTURAL DREAM IS ALIVE AND RACE NO LONGER EXISTS AND EVERYONE CAN REACH FOR THAT STAR.

Lisanti: Hold on just one second. Shouldn’t we consider the possibility that at least some of the judges’ shock originated in the fact that Medium Willie Style showed up onstage with a Cameo-quality flat-top with some awesome Z’s shaved into the sidewalls, and wearing background wardrobe from Beat Street?* These are not exactly the visual hallmarks of a country artist. This was a total setup. He couldn’t have sandbagged the panel any harder if, right after telling them his name, he suddenly yanked down a zipper from his forehead to his crotch and stepped out of his gotcha! suit, revealing crazy C&W prospector Kalvin McManigle underneath:

Kang: The drama. Julia Gulia and her “ice cascade” haircut left her ex-boyfriend to take her shot at the big time. (This is the exact story line that nobody cared about back when Chris Daughtry did the same thing on Idol, by the way.) As Sister Carrie taught us all back in high school, the road to stardom is paved with less-talented ex-lovers, and sometimes when you are 17 or 18 or 19 and have “never wanted anything so much in your life,” you need to stab some people in the back. Later, when you’ve won all the Teen’s Choice awards a mantle can reasonably support, you’ll look out the window of your loft space in Williamsburg, sip from an illegal 44-ounce Big Gulp soda, and wonder whatever happened to that boy you used to know, the one who bought his earrings at Claire’s Accessories and put ketchup on everything.

This is the other side of the American dream, the one that’s never discussed by Obama or Romney and their empty rhetoric of “hope” and “building.” Sometimes, in America, hope and building just leave you with a terrible haircut and the only bro who truly loved you has three beautiful kids and works, happily, as an electrician in High Point, North Carolina. He smiles when he sees you on the television because he is still capable of feeling happiness for others.

Where are those doughnuts?

Also, screw you, Yoshida/Lisanti (Yoshanti, which is either a type of yoga or a $5 yogurt). After this week, I’m going solo with these recaps and will stop e-mailing you things like, “Hey, guys, do you think we might want to reduce the number of posts about X Factor by 50 percent, because I have to go get drunk by myself and watch Project Runway?”

Speaking of hair, Krysten Colon took the whole manicured Mohawk thing a bit too far (it’s gone too far in general). She looked like someone had stapled one of the mid-century modern “idea rugs” to her forehead.

Quick word of advice, Krysten: When you can’t do Adele, don’t ramp up to Whitney. It’s like saying, “You know, Boone’s Farm is getting me too drunk, so I’m going to switch over to heroin.” And when you fart all over Whitney, don’t start breaking everything in sight. Please listen to your beautiful, compassionate mother who, for whatever reason, raised a chair-and-drink-throwing monster.

On the bryte site, Krysten, all that drink-throwing will get you an automatic spot in Basketball Wives!

I don’t know how the producers didn’t immediately hand Jilted Sensitive Ex-Boyfriend a microphone, have him run up onstage, and sob-scream the lyrics to “Somebody That I Used to Know” at Julia. That would have been the most explosively heartfelt spectacle in X Factor history! Even Britney would have squeezed a tear out through her Emotion Suppression System, causing a team of technicians to rush out to the judges’ table and recalibrate her back to “Free-Floating Confused Affect.” That they didn’t set this up is tantamount to reality TV malpractice. Someone pull their license.

And someone check on Kang, I think he might be passed out drunk underneath bolts of chiffon from his Project Runway Sew-Along-at-Home ™ kit.

Yoshida: I demand more of Julia’s unsupportive ex and their Taylor Swift–scored passive-aggressive “do what you want, see if I care” backstage exchanges. Can he perhaps share a bunk bed with her at Demi Lovato’s fake house? Is there a duck phone on which she could have all-night mascara-stained conversations with him? Julia’s like a southern Envy Adams, and I look forward to her descent into faux-indie bitchdom. I actually didn’t hate her performance of that Foster the People song about shooting people; now she just needs a dramatic hook to keep us invested.

And Krysten? Well, honestly, I’d like to stand up and applaud the editors for the entire “God doesn’t want The X Factor to happen” montage during the Greensboro thunderstorm. Pure poetry. I don’t want to believe that the giant bolt of lightning that struck just as Krysten was pouring the last of the hydrofluoric acid on the raspberry-colored chum remains of “I Have Nothing” was fake, or that Krysten wasn’t actually ready to go all WWE on that cameraman after a surge of electricity ran up the mic stand, sent a high-voltage current through her freshly glossed lips, and transformed her into the in vitro lovechild of Banshee and the Hulk. (Really, the whole storm sequence was on par with any superhero-movie origin scene.) I choose one thing to wholeheartedly believe in per episode, be it an inspiring contestant or a dip-dyed ponytail, and if you take the divine punishment of Krysten Colon away from me, I might have to spend my weekend watching Josh Krajcik sing “Wild Horses” on repeat just to rekindle my sense of purpose on this X Factor journey. And let’s be honest, my love of Josh notwithstanding, I got stuff to do.

Lisanti: You hate to dismiss a 36-year-old cool-dad-at-the-playground’s artistic ambitions, but you also hate to pass up an opportunity to use the phrase “Bon Jovi with more tattoos and less charisma.” This job is a constant struggle with choices like that.

Kang:: My favorite moment of this audition came when Jeffrey announced he would be the 3,4950,246th singing-competition contestant to ruin Leonard Cohen’s “Hallelujah.” Simon raised his eyebrows as if to ask, “I wonder if we took old, good contestants from Idols past and put wigs on them if anyone watching at home would notice? Because this is getting sorry.”

Jeffrey just kind of yelled and didn’t emote as much as he just popped out the veins in his neck, but he seems like a nice dude and I’m rooting for him.

Yoshida: I wonder how many of the cutoff-wearing teenagers in the Greensboro Ultradome think “Hallelujah” is a Jason Castro song? Haha, j/k, they don’t remember Jason Castro.

Yoshida: What flavor did you try, Brit Brit?

Yoshida: “Dragon” it is!

Lisanti: To be fair, God’s righteous lightning-vengeance can be super scary.

Should You See It? A Curious Consumer's Decision-Making Guide to ‘The Master’

NBC Comedy Recap: The Beginning of the End of Must See TV Thursdays