Should You See It? A Curious Consumer’s Decision-Making Guide to ‘The Master’ 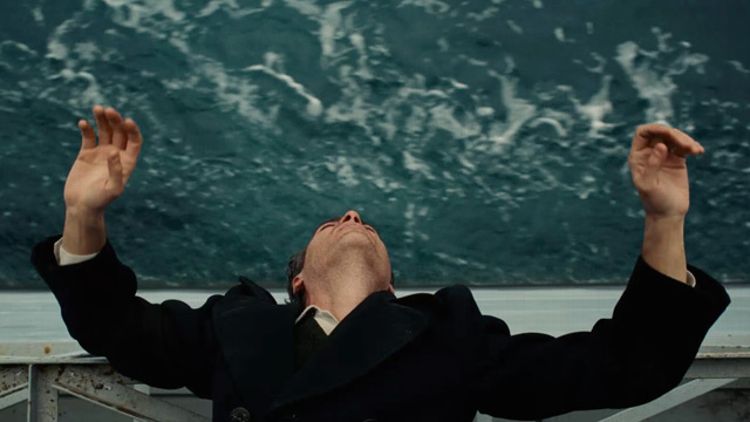 Should You See It?

It can be argued that Paul Thomas Anderson is America’s greatest living director. That particular argument is not one we’re about to undertake, because we’re not looking to incite a cineaste melee in which various Criterion Collection Blu-rays are hurled to and fro like so many phosphorescent Tron death-Frisbees, but here is the short yet significant filmography of the man a certain excitable segment of the population likes to shorthand as “PTA”: Hard Eight. Boogie Nights. Magnolia. Punch-Drunk Love. There Will Be Blood. And now, arriving with roughly the same level of anticipation in the film-obsessed community as behind-the-scenes footage of a drunk Orson Welles test-sledding six dozen Rosebud prototypes, The Master.

Anderson’s latest divisive masterpiece was released on a handful of screens in New York and Los Angeles last week, shattering per-theater records in the process. Today, it expands to 788 locations, giving moviegoers in the rest of the country their first opportunity to partake in the Mastermania gripping artisanal-torpedo-juice-sipping coastal elites. But should you part with your hard-earned entertainment dollar on a movie that, at this moment, is a mere nine points higher on the Tomatometer than Dredd 3D? We once again are committed to answering the questions that will guide our readers to the best possible ticket-buying decision.

Are you a Paul Thomas Anderson fan?

You have already answered “yes” to this question with a solemn nod. You’ve fashioned your own commemorative Dirk Diggler stunt-dong from the foam pad at the top of a crutch, you delight your friends in HR with your pitch-perfect impression of Frank T.J. Mackey’s “respect the cock” speech at meetings, and you have, in your darker moments, gripped a bowling pin and seriously considered the ramifications of the bludgeoning murder of an annoying rival. Though you’ve had arguments about whether “Paul Thomas” or “P.T.” is the proper moniker for Anderson, you would never refer to him as “PTA” because that’s disrespectful, like calling Quentin Tarantino “Q-Tino.” Punch-Drunk Love is your favorite of Anderson’s movies because it’s an instant litmus test of one’s dedication to the auteur (you’re also very comfortable unself-consciously referring to him as an “auteur”), and picking Hard Eight would just make you seem insane. You Pricelined a plane ticket to L.A. to get a chance to see a midnight show of The Master in the full majesty of 70mm in the Cinerama Dome last week. You understood every reference in this paragraph but thought to yourself, If he were serious about this, he really should have name-checked Ghoulardi somewhere in there. You have at some point defended Mark Wahlberg’s acting, and “Sister Christian” makes you cry.

There is LITERALLY NO QUESTION that you will SEE IT.

Do you generally not care for Paul Thomas Anderson’s work?

This is a totally valid opinion to have! (And you’re welcome for validating your opinion!) Anderson is perhaps not everyone’s “thing.” Some find him self-indulgent, some increasingly and off-puttingly chilly, some an impeccable stylist with a questionable grasp of narrative. Some just don’t give a shit. Karl Urban is exploding skulls with a hand-Howitzer one screen over, in 3-D — holy Dredd, that dude just got cut in half with bullets. The incredible spectrum of human preferences is a beautiful thing.

You are probably not going to hang with this movie; one could make the case that this is the most “Paul Thomas Anderson” of Paul Thomas Anderson’s films. We’ve already established that you’re not that high on the man, and now we’ve used his name twice in the last sentence, once as an adjective describing himself. You’re sick of hearing about him. Let’s get this over with.

SKIP IT and maybe see if Boogie Nights is on cable; everyone likes that one.

Are you looking for an intense, often frustrating cinematic experience that will probably stay with you for days?

There are “cocaine movies” (early Anderson, anything by Michael Mann or Tarantino), there are “pot movies” (every other Coen brothers release, Richard Linklater’s stuff), and even “bath salt movies” (in which Michael Bay was involved in any capacity). Not that you can fit every film so neatly into one of these drug-related taxonomies, but The Master is probably the first “taking a fistful of Adderall and staring at a stereoscopic Magic Eye poster until you see Joaquin Phoenix angrily finger-blasting a sand-lady” movie. It’s not the kind of thing you forget about 10 minutes after you leave the theater. It’s more the kind of thing where, while you’re doing laundry a week later, you think to yourself, Oh my God, I can sketch Freddie Quell’s forehead topography from memory. And then you go to the garage and wonder if it’s safe to drink WD-40 if you squirt it into the center of a cantaloupe.

SEE IT. It’s definitely a memorable change of pace from inhaling bath salts with Starscream.

Are you the type of person who loves to play the contrarian, and who would delight in telling all your obnoxious friends how amazingly overrated you find that pretentious garbage everyone won’t shut up about?

There is a pig in shit. And then there is a pig who accidentally wanders into the fecal storage area of a shit-processing plant. You will be the latter.

SEE IT. You are gonna get the chance to be SUCH A DICK about it.

Do you hope you’ll leave the theater with an amazing new catchphrase like “I drink your milkshake”?

We suppose that if you tried hard enough, you could make “touch the wall, touch the window” or “Violation! Start again” happen for a minute. But no, there’s no milkshake. There’s not even a “bastard in a basket.”

SKIP IT. We don’t need another milkshake moment.

Are you a fan of great acting? Like, Really Great Acting?

Remember how insufferable Joaquin Phoenix was during that utterly misguided detour into fake-rapping? All is forgiven! It was just part of his process, a learning experience that made his mind-blowing work in The Master possible. Indeed, we’d prefer that this eye-opening artistic growth didn’t involve daring us to watch someone poop on him. Which we did, because we’re completists. Still, could’ve done without that. Take a class next time. Go on a walkabout. Fast-forward through the pooping-upon stage. De Niro never let anyone defecate on him until Little Fockers.

Also bringing an Oscar-caliber performance to this movie: Philip Seymour Hoffman, who, truth be told, is incapable of anything less than greatness. No, we’ve never heard of Along Came Polly, why do you ask?

SEE IT. You’re too intrigued by what was in the spoiler — which you dutifully skipped over so we don’t have to hear about how we ruined your life — to pass on this one.

Are you looking to become intimately acquainted with every quivering inch of the geometric improbabilities of Joaquin Phoenix’s rage-contorted torso?

We told you things get intense with him.

SEE IT. And bring along the special scapula fetishist in your life. They’ll THANK YOU. Oh, how they’ll thank you.

Would you kick yourself if, come Oscar time, you had not seen all of the Best Picture nominees?

There is a 100 percent chance that this movie will be nominated for Best Picture. And probably Best Director, Best Original Screenplay, and Best Cinematography, plus all the acting categories. And probably others we’re skipping over right now. Is there an Oscar for Best Scene Involving Shifty-Ass Sailors Guzzling Improvised Torpedo-Hooch? We’d pencil that one in, too; it seems a safe bet that Lincoln’s not going to be competitive there.

Better SEE IT. It’s a lock.

Are you looking for a movie that explains why Tom Cruise, a very handsome and very, very rich movie star, albeit one with a super-weird torso and an equally strange way of running, allegedly held “auditions” for a wife, according to that Vanity Fair article that’s full of ugly lies we in no way believe nor endorse?

The Master is about Scientology the way There Will Be Blood was about the oil industry or Punch-Drunk Love was about coupon fraud. A Scientology-like religion, headed by an L. Ron Hubbardish, um, Master, is the setting. The backdrop? The context? It’s not about fucking Scientology, that’s what we’re saying. Leave Tom Cruise alone, he’s very busy trying to settle into a new life as a part-time parent to an adorable little girl while TMZ scours his garbage for shredded pieces of a billion-year marital contract. He really doesn’t need this right now, OK?

SKIP IT. Go Netflix up some Battlefield Earth, Terl.

Hold on. Are you saying that Tom Cruise, the founder and reincarnated ancient interplanetary volcano-god or whatever of Scientology, is starring in this movie about Scientology?

We’re not even answering that.

Can we get back to the thing about Joaquin Phoenix and the sand-lady? We kind of glossed over that.

Do you feel even a little bit guilty about the gratuitous shot you took at Mark Wahlberg’s acting up at the top?

What? We implied he was good in Boogie Nights! Don’t put words into our mouths!

But notice how he’s NOT IN THIS ONE, with all the Oscar winners.

Come on, he was great in The Departed.

We’re not going to have this argument right now.

He was just playing YET ANOTHER VERSION of himself.

But: I Heart Huckabees.

More Should You See It?

See all Should You See It?