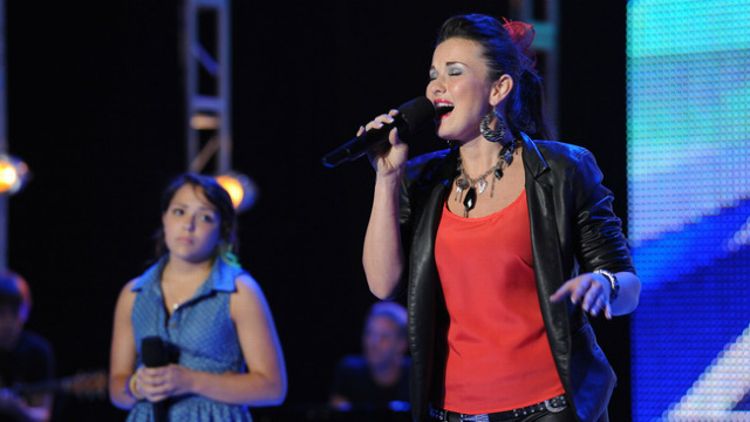 For reasons still not entirely clear to them, Grantland editors Jay Caspian Kang, Mark Lisanti, and Emily Yoshida have decided to track the second season of The X Factor. It’s a tough job, and honestly, nobody really has to do it, but — shhhhh — don’t tell them that.

I’ll be honest, I’m not exactly sure what’s happening on The X Factor anymore. My girl Jessica Espinoza was unceremoniously dismissed last night, a nasty strain of viral aphasia is running rampant in the Mondrian, and CeCe Frey’s Animorphs journey is almost complete. Today was “Task 2” of boot camp, a series of head-to-head duets among the remaining competitors, but for the life of me I could not figure out what function these battles serve. They’re clearly not pitting contestants against the competition in their own category, and it doesn’t even seem like one person in each battle definitely moves on or definitely goes home.

To add to the disarray, our exposure to the individual contestants up until this point has been so overtly skewed toward whatever narrative the producers are building to for the live shows that there are still tons of artists in the race that we haven’t heard a note from, making it stupidly obvious who will prevail in certain matchups. These pre-recorded episodes are all edited after the Final 16 have been determined, so The X Factor, much like The Newsroom, is a television program whose production schedule benefits a lot from hindsight. For some reason I’m more perturbed when the subject matter is singing teenagers than, say, the BP oil spill, but these are my emotional priorities, and I don’t question them, so neither should you. I’m missing the relative sanity of The Voice; even with the added twist of the judges’ steal during the battle rounds there’s at least a sense of —

[Tackled to the ground by Kang and Lisanti and made to chug an ice-cold Pepsi X.]

— YES, DEFINITELY WATCHING THE HIGHEST-RATED AND MOST ENJOYABLE OF ALL SINGING COMPETISHES. And I would definitely drink that in a restaurant! Now join us as we relive some stuff that happened to some people who are not Panda Ross. — Yoshida

Kang: I nominate “Landslide” for one of the songs contestants under the age of 25 should never ever sing. Unless you actually had a kid when you were 15 and now the kid is getting older while you’re getting older, too.

Tara Simon’s performance showed exactly why everyone with a modicum of taste and restraint (read: not us!) hates singing competitions. “Landslide” is a muted song about being afraid of changes because someone built their life around you. It’s not about squeezing your ass cheeks together to forge together 15 notes in one run. In other news, I’m registering a website called bloggerworktrade.com, where you can trade columns/posts with other bloggers. I literally will take anything right now if someone will watch The X Factor and write about it twice a week. Like I’d blog about farm festivals, water usage conventions, lactose intolerance. ANYTHING. PLEASE.

Yoshida: Thanks to last night’s Parks and Rec, I have finally figured out that Tara Simon just looks like an older version of Lucy Lawless, and now I can sleep for the first time in three weeks. I am so interested in Tara Simon’s boot camp packing strategy. I think she decided her look was “villain in an ’80s teen musical who sabotages the protagonist’s record deal and/or offers her cocaine.” I was half expecting to see her swipe CeCe’s Cheetah Face™ paint kit and dribble some tiger claw slashes across her face just for emphasis.

Lisanti: Every good reality show needs a villain, and this season of The X Factor has now given us two really grade-A, totally unsympathetic karaoke heels in Tara Simon and CeCe. “The second C is for ‘I’m going to show the whole world how speCial I am!'” Frey. They both want it so much that every over-sung run, every lip quiver, every overwrought restatement of world-dominating purpose to the judges just vibrates with the realization that they’re one just-OK performance from being deported back to Not Living Their Dreams, USA. The two of them churn so intensely with the need for success that if you were to unscrew the top of their heads as they stand before the judging panel, the auditorium would be filled with shrieking, face-melting wraiths that bear the likenesses of all the people Back Home they want so desperately to leave behind. And if you closed your eyes to survive the unholy onslaught of murder-screaming personal demons, they’d just shiv you where you sat if it helped advance them to the next round.

This is to say: They’re in it to win it, dawg! (Alternate plans: self-immolation, depressed mail-clerking, respectively.)

It’s too bad they’re both pretty terrible. CeCe sort of had a moment with Whitney, but that moment has passed. Tara remains Tara. They are toast. One just hopes Jennel and Paige survive the toaster.

Yoshida: Sister C must be physically incapable of speaking for more than five seconds without dropping the N-word; this is my only theory as to why we have seen so little of them up until now. I know The X Factor can’t help but paint all conventionally pretty, non-bullied, non-poor girls as villains, but Sister C sound really talented, and sure, marketable (this based on the total of 15 seconds we’ve seen of them so far, but still). If they make it to Judges’ Houses, they better pray that Simon or L.A. get the groups; I can only imagine the series of menial tasks and outright torture Britney will put them through while Emblem3 and L3vel chill out in the den eating fried chicken and watching old VHS recordings of Britney & Kevin.

Lisanti: They are hot, they are sisters, they sing country. We could probably erase the deficit on their earning potential, and yet we never see them. They must be cannibals. That also might explain what happened to Panda.

Kang: DEEP BREATH. DEEP BREATH TWO. OK, DAVID CORREY, YOU DID IT. Not only did you pull off the “Hey, my struggle is more important than everyone else’s and I’m going to leverage that spiritual arrogance to get ahead in a reality TV show,” but you followed it up with the completely unforgivable “I’m going to sing over my opponent AND get the last note in when it’s clearly his turn.”

A curse on you and your haunting eyes!

At least Lion-O Patridge is too clumsy and driven to really pull off her attempts at sabotage. There’s something almost endearing about her singular drive to succeed. You, my friend, are just an asshole.

Yoshida: I feel like between the three of us, we make watching The X Factor sound like an unrelenting death march to Christmas, when actually, for me at least, there are lots of laughs to be had each hour. Granted, they are more short, strangled mirthless yelps/literal cries for help than laughs, but something in my brain told me to make a noise, so I think that counts. Anyway, I made one of those noises last night when David Correy got up and delivered a baffling yet earnest preamble to his battle with the increasingly likeable Vino Alan:

To which Simon replies, nearly cutting him off:

There was no question mark on that question. There’s also no other way to respond to that — I think unintentionally? — half-insulting jumble of words. Simon is clearly losing his patience with these babbling, under-slept emotional disasters whose airfare and hotel rooms he is for some reason paying for. This is why I both love and and am forever confused by Simon. He clearly has an allergy to superfluous feelings and sob stories, yet he enables them over and over again. That’s basically his job description. I guess the punishment/reward cycle of singing competitions doesn’t work if you take out the reward part. In fact, he’s probably got an entire team of interns searching for David’s birth mom as we speak.

Lisanti: I think when David said “roadblocks,” he actually meant “grudging enablers of my brief flirtation with something that will feel like success for about three weeks, but will later metastasize into a failure-cancer that burrows deep inside my cells for the rest of my life, anyway, thanks for maybe helping me find my mom, if she watches The X Factor.”

Vino Alan scares Britney. Vino Alan also scares me. Who tattoos on a full head of hair? A scary person, that’s who!

Yoshida: I don’t know what to make of Willie Jones anymore, and I am definitely not helped by the suggestion that choosing “Nobody Knows,” which, sorry, everybody knows, was an act of sabotage on Tate’s part. And the fact that this entire segment is so skewed toward Willie’s POV so we don’t have a chance to judge for ourselves. And the fact that Britney appears to have lost track of the opinions Simon has been slipping to her via a very thin stack of color-coded index cards, and is now accidentally Team Willie. And the fact that Willie seems to be implying that he’s unfamiliar with “Nobody Knows” because it’s “from the ’90s.” WHAT’S YOUR EXCUSE FOR YOUR FLATTOP THEN, BRO? #ZING

Kang: I’m similarly confused by Tate, who, up until last night, showed up in pretty much every segment but never opened his mouth. Then when we finally heard him sing, he was super boring. Like if you bottled up every country singer on the radio right now, leeched out 20 percent of the vocal talent and then asked your uncle’s best friend to drink the potion and put on a cowboy hat, that would be Tate.

As for Willie, last night proved that he’s actually got a nice tone to his voice when he’s not trying out-McCreery everyone. Much like DeAndre Brackensick (cue Lisanti swooning), he needs to stop going for the gimmick and just sing the goddamn song.

I was wrong about there being two great villains this season. There are three. And the third one is Tate.

Lisanti: Who will cry more on Wednesdays and Thursdays this season: Britney, confronted weekly with the crushed dreams of people who remind her of her lost innocence, or Jay Kang, spilling forth crocodile tears over writing the X Factor recaps he secretly loves more than anything but his surfboard airbrushed with the likeness of a winged panther with Jacob Lusk’s head?

I think we all know which side of the bet is the smart one.