JoBroNoMo: Remembering the Brief But Passionate Era of the Jonas Brothers 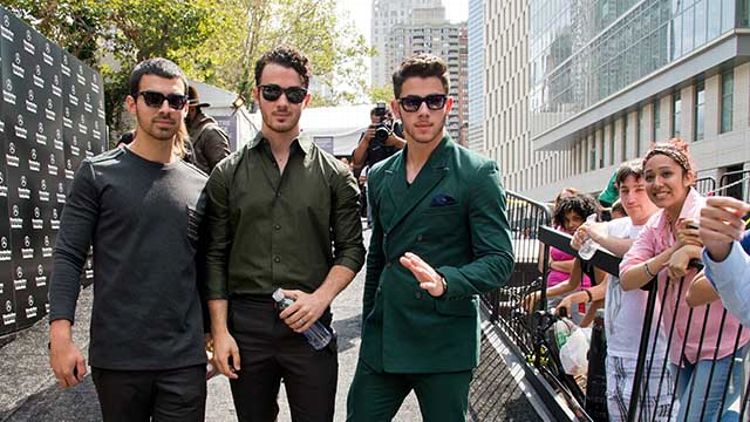 After weeks of confusing comments from their camp, a deleted official Twitter account, and rumors ranging from fraternal discord to heroin addiction, the Jonas Brothers have officially announced to People that they are indeed breaking up. Having canceled an upcoming tour, they’ve also chosen to shelve what would have been a comeback album. It might seem ridiculous that a group whose peak was only a few years ago would already be in need of a comeback, but such are the flighty pace and fickle fans of the genre known as tween pop. The Jo Bros would have been returning to a cultural landscape where their tousled hair and tight pants were no longer required, with the natty One Direction and always-shirtless Justin Bieber having easily slid into their former place. While One Direction doesn’t shy away from discussing sex, the Jo Bros cultivated a more modest image while still letting teenage hormones line their pocketbooks. I can’t say that nobody would be checking for a Jonas comeback, because there are plenty of disappointed fans expressing their sadness on social media. The Jonas Brothers were only a mild phenomenon, filling the gap years after the millennial reign of the Backstreet Boys and ‘N Sync but missing the official boy-band revival window exemplified by 1D and the Wanted by a scant couple of years. The most disappointed person is probably the boys’ dadager, Kevin Jonas Sr., a pastor who made his Osmondish sons into a meal ticket and set up the multiyear contract with Disney that propelled them into being the stars of enjoyable cornball projects like Camp Rock and mediocre kid sitcom JONAS. Youngest brother Nick Jonas, who experienced his greatest fame as the point of a love triangle featuring himself, Miley Cyrus, and Selena Gomez when they were still all teens, is probably the most genuinely talented as a musician. He released one John Mayerish solo album with a backing band called the Administration and produced most of the Jonas Brothers album that will now never be released. It’s possible he will dip behind the scenes and become the Svengali songwriter for a new generation of fresh-faced teenyboppers, unless he decides to make another bid for the serious musician cred that always eluded him as a glorified Monkee. Kevin Jonas will probably end up as a professional reality TV contestant, having cut his teeth with an E! show. Joe Jonas is anyone’s guess. He has been jet-setting in recent months with improbably named girlfriend Blanda Eggenschwiler, seemingly doing nothing but eating brunch, walking around Los Feliz, and showing off his great collection of knit autumn cardigans. For reasons that now escape me, I once ran a Tumblr page called Jonas Secrets that collected the best of the Post Secret–type memes that Jonas Brothers acolytes regularly posted to a Facebook group. I was fascinated by how raunchy the captions often were, the general hysterical tenor of the fans, and their unwavering devotion to the Jo Bros, whose power pop never quite escalated to the level of the best ephemeral teen idol tunes. I wonder what happened to those fans, how many of them have moved on to metal or dubstep or Drake, how many still keeps a candle lit for Joe Jonas and the magnificent swoop of bangs that Taylor Swift referenced on her MySpace after he dumped her in a 27-second phone call. Don’t cry for Taylor or Miley or Selena. They’re all doing fine without the Joni. Let’s commemorate the end of an era by revisiting some of my favorite Jonas Secrets. It’s only a matter of time until the inevitable reunion and VH1 biopic. Filed Under: R.I.P., The Jonas Brothers