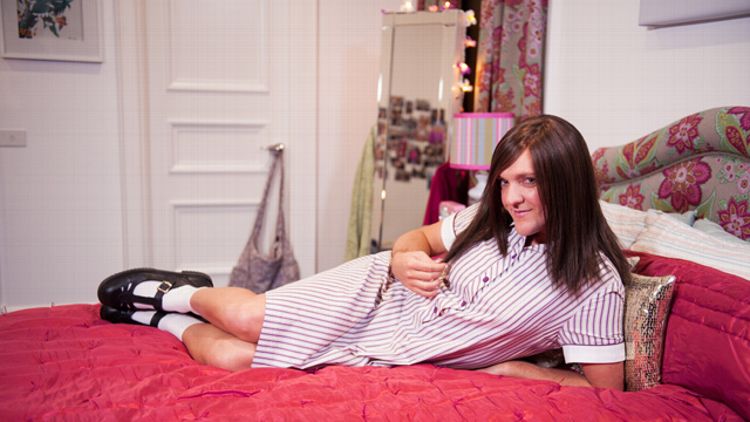 I have often tried to imagine a female Kenny Powers, although the image sometimes goes no further than Danny McBride in a wig. As it turns out, that’s not too far off: The figure that HBO has anointed as the next Kenny is actually portrayed by an Australian man named Chris Lilley, who wears a stick-straight brunette wig, a girls’ school uniform, and a slick of glittery lip gloss to portray a monstrous teenage girl named Ja’mie King in the show Ja’mie: Private School Girl. Spoiled teen princess Ja’mie is a mass of contradictions. She is selfish, racist, classist, homophobic, condescending, immature, incredibly vain, and generally clueless. But as portrayed by Lilley, she is somehow compelling despite those traits. Ja’mie takes her own likability for granted, counting on her (implied) good looks and girlishness to get her out of any trouble she might cause. There’s a tremendous gap between the way Ja’mie believes she appears to others and how she actually comes across. It’s mirrored in the difference between what we are meant to infer Ja’mie looks like based on her beautiful gang of lissome blonde 17-year-old followers and how Ja’mie actually appears to the viewer: like a 39-year-old man in rather unconvincing drag.

Although Lilley looks nothing like a teen queen, he embodies Ja’mie’s mannerisms and tics with incredible specificity, creating a more than viable illusion that he is in fact a rich and popular girl finishing her senior year of high school. His portrayal of Ja’mie feels very real because he plays it more or less straight. He never winks at the viewer from underneath the character; there is only Ja’mie. He depicts various aspects of teenage girl cliquedom. There is the compulsive hugging and outpouring of love every time the group has to part, whether for the night, a holiday break, or just the length of a math class. There is the competitive angling for boys considered hot, whose attractiveness must be deemed factual by committee so that they may be deemed (as Ja’mie keeps putting it) “quiche,” and the ill-contained rage when somebody else gets them. All of the ugly emotions of being human are on display in Ja’mie, combined with a ladylike front cover that strives to maintain appearances.

A mean girl whose corrosive mixture of insecurity and entitlement breeds hatred in her teen heart, she captures the dark art of girl-on-girl bullying: the casually vile homophobia, the strict social order dictated by class, the insults cloaked in niceness and the ones that aren’t cloaked at all. She is generally a bitch, although she employs a baby voice that is much softer and higher with cute boys, her father, strict teachers, and anyone else with whom she needs to curry favor. Ja’mie’s pointed jabs are much more cruel than they are funny. (Even Kenny Powers was sometimes softened by being compared to characters who were even worse than he was, like Ashley Schaeffer or Guy Young.) She saves her least-disguised bile for the “boarders,” a group of girls who live in dorms at the school. It’s weirdly satisfying to watch somebody just be an asshole to everyone, maybe because humans — but especially female humans — are generally encouraged to tamp down unsightly feelings. Ja’mie is meant to play as vicious satire. The joke is never on the girls she tortures, it is always on Ja’mie.

Having said that, Lilley has a controversial history of satirizing racial issues that are not really his to satirize. It’s an extremely thin line between jokes about racism and racist jokes, and Eastbound & Down surfed that edge on the regs. While the ostensible joke about Ja’mie’s constant flippant racism is the ignorance embedded in the insulated upper class, it’s easy to imagine Ja’mie’s most horrible quotes GIF’d into contextless hatred, reinforcing the very behaviors the show means to criticize. Lilley has also donned blackface, brownface, and yellowface to portray characters on his previous shows We Can Be Heroes, Summer Heights High, and Angry Boys. Lilley’s desire to portray specific characters outside of his white male experience may not have been malevolent, but it is very ill-informed.

Lilley’s character Jonah Takalua, a Tongan immigrant to Australia who struggles with anger issues and Australian racism toward Pacific Islanders, was seen as a sympathetic portrayal of a pervasive social issue. Positive reviews admired Lilley’s ability to disappear into a character, which made the complex Jonah feel like someone else. By surrounding himself with actual Pacific Islander teenage boys, Lilley wanted to trick the audience into believing that he fit in. But there’s no reason he couldn’t have attempted this conceit without darkening his skin. The idea that no actual teenage Tongan boy was up to the task of playing Jonah, forcing Lilley to step in, is ludicrous. Since Lilley portrays people of all ages and genders, I’m sure he saw race as the next obvious category to play with, but it’s very different to wear mascara than burnt cork.

While Jonah is lovingly drawn, there was no such dimension to Angry Boys characters S.mouse, a mediocre black American rapper, or Jen Okazaki, the overbearing tiger mom who markets her teenage son’s skateboarding career, both played by Lilley. It reminds me of some of Tracey Ullman’s more cringe-worthy characters from HBO’s Tracey Takes On, like doughnut shop owner Mrs. Noh Nang Ning, black security guard Sheneesha Turner, and Middle Eastern cab driver Chic. While Asian American groups protested the show, HBO backed Ullman by claiming that the portrayal of Mrs. Noh Nang Ning was a positive one, rather than acknowledging that a white woman putting on racialized makeup to play an Asian character is fucked up. Ullman later bragged that she had received letters from young Asian Americans thanking her for allowing them some kind of representation on TV, which feels particularly fucked up. That was in the supposedly progressive ’90s. It’s worth noting that a blackface variety show called The Black and White Minstrel Show aired on the BBC as late as 1978.

Dipping into the historical tradition of blackface is not as subversive as Lilley might think. There is also a longstanding issue in media of white men telling the stories of minorities, as if they were the only ones who could legitimize those narratives. There’s also some weird thing about comedians that makes them want to see how far they can stretch a fine line before it snaps. Robert Downey Jr.’s Tropic Thunder blackface was meant to be a satire of Method acting, but you can’t control how the audience interprets a joke, whether they are laughing at the script’s finely tuned wit or at the sight of a famous actor guy impersonating another race. Whether Lilley’s intention is to shock or just a misguided attempt to tell stories that rarely get told on TV, he shows no intention of stopping. His next project is a Jonah show, in the vein of the Ja’mie one-off, to be called Jonah From Tonga. It seems strange to want to be celebrated for demonstrating the plight of a group you don’t belong to, even when just trying to help. Lilley is a keen impersonator, but you never lose sight of the paint darkening his face.

It’s hard to write about Chris Lilley shows because the racial issues are a glaring facet of what is an otherwise really remarkable run. He is capable of truly amazing character work; We Can Be Heroes’ ground-rolling champion Pat Mullins is one of the most memorable and moving screen characters I have ever encountered. On the flip side, characters like Ricky Wong bank on a theatrically racist “Asian accent” for laughs, and make you cringe in the way that is only bad. Lilley swings from high to low with facility; sometimes you laugh and then you shudder that you laughed. Even Ja’mie breaks up the bleakness of the humor with moments of joy and genuine emotion. In attempting to portray the full range of human types, Lilley overreaches his grasp, but when he lasers in on one character like Ja’mie, he can excel.

Ja’mie portrays the floating world of adolescence where technology, fashion, and slang may change but behavior never does. Despite the strictly contemporary phenomena like dick pics and room-to-room Skype, there is a timeless air to Ja’mie screaming at her mom to get out of her room. If Ja’mie is a stateside success, it’ll bring more attention to Jonah and the discussion over whether Lilley is smart or very foolish. He can’t be blind to the criticism (and he’s addressed it to some degree), but to dismiss the complaints would be obtuse. He should zero in on his considerable talent for character portrayal without the crutch of racist stage makeup. If he really wants to break in America, Lilley would be a lot better off retiring characters like Jonah, Ricky, and S.mouse for good. Mickey Rooney in Breakfast at Tiffany’s and Peter Sellers in The Party did not age well, and nobody should try again. There are plenty of other things to do. Maybe bring back Mr. G?