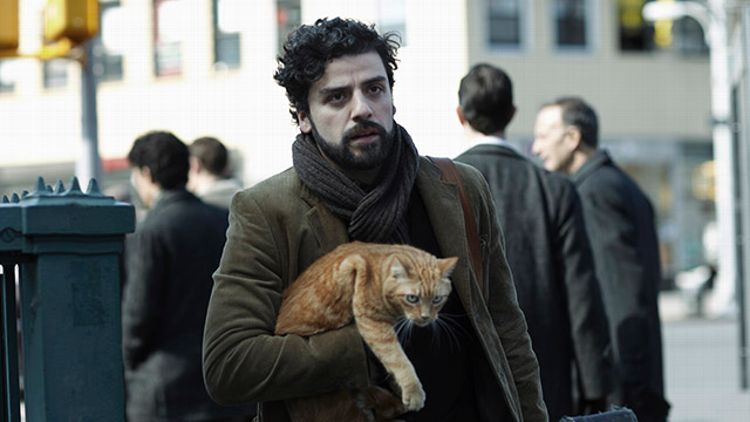 I purposely tried not to learn anything about Inside Llewyn Davis before seeing it, but the whole tone is right there in the title, in the hero’s difficult name. The movie never pushes the joke too hard, but it’s understood that Llewyn has spent his life telling people how to correctly pronounce his name (it’s Welsh). I wanted to come into Inside Llewyn Davis completely cold and get enveloped in its wintry early ’60s New York milieu. There is nothing like listening to a record for the first time before you’ve read any of the reviews. From the little bit of information I did know, I expected a patchwork quilt movie about the Greenwich Village folk music of the early ’60s, an Almost Famous for the Joan Baez set, A Mighty Wind played straight. But the Coens don’t play straight, they play sideways. What I got instead is a series of circular vignettes, a small epic narrative about inner loneliness. Inside Llewyn Davis concerns the trials of its titular hero, played by Oscar Isaac with a winsome sensitivity that allows his character to get away with a lot of selfish acts.

Inside Llewyn Davis often feels like the male counterpart to Noah Baumbach’s contemporary-set Frances Ha, with their corresponding stories of New York slackers nearing the end of their salad days with no money saved up for their steak years. When friends remind them that the future is looming, they bristle defensively and double down on flightiness. They know that they’ll still have to make big choices in the coming years one way or another, whether by choosing on purpose or choosing by omission, Hamlet-style. Banking on art to pay the rent is risky even when there is no other option, and frustrating when you are surrounded by people who make it look easy, either because of inherited wealth, dumb luck, or because they are Bob Dylan. It’s so hard to pull off that for most of both movies, neither one actually has an apartment. Instead they drift from couch to couch, sometimes conjuring goodwill out of nowhere and other times accidentally burning it up. They spend vacations in the homes of rich acquaintances under a cloud of understanding that a lifestyle of ease might be permanently out of their own grasp.

Stories about early struggle and roughing it for no pay are much easier to stomach when they end in success. But what about when they end in abject failure and abandonment of old ideals? Inside Llewyn Davis is loosely based on the memoirs of folk singer Dave Van Ronk, a cult figure in the New York folk revival scene of the ’50s and ’60s who showed Dylan the ropes when he moved from Minneapolis. Aside from his status as a local legend with underappreciated chops, Llewyn is nothing like Van Ronk. While Van Ronk was a sociable man about town, Llewyn is an introvert with the occasional burst of manic energy. Llewyn is compulsively sleep-deprived, falling asleep last and waking up first as he surfs from one uncomfortable couch bed to the next.

In 1961, the folk revival is still winding up but Llewyn Davis is already long burned out on the scene. Once a fixture at Gerdes Folk City’s hootenanny nights in the West Village, Davis has reached his limit for performing without getting paid. A backstory that somewhat explains Llewyn’s prickliness is lightly sketched in, but he is also generally surrounded by idiots. A somber blues traditionalist who was once part of a folk duo, Llewyn is not seen as especially marketable by the people he needs to invest in him as an idea and an actual human being. His hope that the work can stand on its own has been crushed by a box of his own solo records, delivered back to him after going unsold. He is tired of showing off his talents without compensation. He knows his guitar won’t keep him warm during the long frigid nights unless he chooses to burn it as firewood.

Llewyn sees cynically that his integrity and talent won’t help him make the payment on his union dues, overlaid with the truth that most record execs don’t know shit about music and only care about one sound: the cash register. A wholesomely sexy boy-girl-boy trio in the mold of Peter, Paul and Mary and an all-American soldier with a side career are both trotted out as loathsome options for what Llewyn ought to aspire to. Instead he trudges ahead with his own unique brand of sleepy-eyed, angry-drunk, deeply depressed, cracking-up-inside folk music. The pleasure of music itself still exists for him, but as he sees his inferiors getting paid for lackluster efforts, he finds that mediocrity often eclipses true flair.

Justin Timberlake holds back from his trademark vocal mannerisms to skillfully sing very sweetly for a folk song, providing a glimpse into the near future when he will make a stripped-down gothic country album with Rick Rubin. Mark it, dude! Meanwhile human Tex Avery cartoon wolf Adam Driver does a great backdoor audition for the next Coen brothers Western as a self-made pseudo-cowboy named Al Cody. Garrett Hedlund plays another Neal Cassady figure, a much more convincing cowboy with a lead foot on the gas. John Goodman turns in a gleefully fucked-up performance as the howling fat man of the piece, an apocalyptic jazz musician sporting the movie’s premier silly haircut.

As cool as 1961 Manhattan looks to our jaded modern eyes, the stylish parade of slick beatniks in plaid coats and turtlenecks quickly dries down into a bleak icy hell spent chasing possibly imaginary next gigs down comically narrow hallways. There are also constant reminders that the ’50s have barely just ended, and that the New York of the ’30s and ’40s are still there, too, accumulating dirt. The claustrophobic apartments of New York are paired with the existential horror of the open highway at night during snowstorms. Wherever Llewyn goes, he is isolated. No matter who he talks to, he’s alone. The only real compatriot he has is an orange cat he picked up by mistake who reflects back to him his fear of taking responsibility for himself, let alone for a smaller and even more fragile being.

The closest cousin of Inside Llewyn Davis is Barton Fink, another stinging joke about the enormous gap between the potential for true artistry and what those who create and control the markets believe should get made. Whether it’s a Wallace Beery wrestling movie or a dazzlingly good-bad faux-Coasters folk song about the space race called “Please Mr. Kennedy,” it is easy enough to transpose onto the current climate where labels want artists to make ringtones rather than albums. You’re either a square careerist just trying to save up enough paychecks for the nuclear lifestyle, or you’re a stubborn outsider for refusing to cave and cash in.

Like a cat looking for a place to lie down, the movie stretches and ambles around before committing to where it will settle in. I often feel like Llewyn Davis any time I am lugging my laptop around town, looking for a place to settle down and plug in for a few hours at a time. I’m not sure what genre to classify Inside Llewyn Davis as, nor do I particularly want to classify it at all. Like its hero, it resists identification as one kind of story, although it is beyond specific. There is an underlying story about fathers and sons, the reasons that young people in the ’60s might reject (or replicate exactly) the lifestyle of their parents, and whether loyalty to a job or a marriage or any hard concept at all is really what it’s cracked up to be. Inside Llewyn Davis is a lovely movie, sad and wonderful, that smartly uses open tuning.

What Will NBC's Follow-up to The Sound of Music Live! Be?