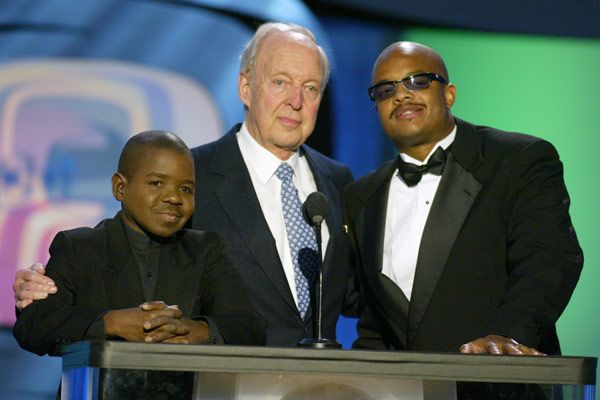 Conrad Bain, who played the stuffy-yet-kindly widower Philip Drummond for eight seasons on NBC’s Diff’rent Strokes, died yesterday in Livermore, California. He was 89.

Born in Alberta, Canada, Bain was a prolific theater actor before he became a sitcom dad. He played Larry in the same 1956 Off Broadway production of Eugene O’Neill’s The Iceman Cometh that launched Jason Robards’s career; a 29-year-old Peter Falk played Rocky the Bartender.

He was already doing TV by then, such as it was. Bain on television, in a 2002 interview: “I never thought it would last. I thought it was a novel thing that CBS and some other people were throwing some money into just to see if it would stick to the wall.”

From the IMDb “goofs” page for the 1952 Studio One in Hollywood adaptation of Kenneth Fearing’s The Hospital, featuring Bain as Dr. Caldwell: “The program opens in a busy hospital lobby. Each time a show credit flashes onscreen, the actors all freeze in place to simulate the freeze-frame effect used in films. However, their clothing and the television cords continue to vibrate.”

He’s in the first episode of the vampire soap opera Dark Shadows, circa 1966, as an innkeeper with a supernatural mustache. “I did three episodes,” he told an interviewer in 2002, “then when they wanted me again I was not available, and that sort of petered out. Then one day, a year or two later, I got a phone call, and a young woman’s voice said, ‘Mr. Bain, this is Dark Shadows.’ I said, ‘Yes?’ She said, ‘Were you ever eaten by the werewolf?’ I said, ‘No, I don’t think so. I would remember that.’ She said, ‘Oh, we’ve got to get you back then.’ So I had to go back to get eaten by the werewolf. And that terminated that.”

His credits over the years tell a story about the niche he found as he worked his way through television and film. “District Attorney.” “Lawyer.” “Manager.” “Hotel Clerk.” “Madison Avenue Man.” “Dr. Charles Weldon.” “Professor Heinrich.” “Dr. Rubicoff.” “Dr. Gordon.” He played authority figures, buttoned-up guys. Here he is in 1967, hosting a creepy instructional film about how to set up an emergency command center in the event of nuclear attack. He’s utterly convincing as an expert on post-apocalyptic phone-banking procedure, and also weirdly soothing.

Depending on which story you believe, writer/producer Norman Lear first saw Bain when he auditioned unsuccessfully for Lear’s 1971 film Cold Turkey, or in the Off Broadway plays Steambath and Scuba Duba. (All the O’Neill and Shakespeare notwithstanding, a lot of the titles on Bain’s stage résumé kind of have that Barton Fink feeling.) Either way: Lear cast Bain in Maude in 1972, as Rue McClanahan’s conservative husband, Dr. Arthur Harmon; he was convincing enough that people used to approach him in airports, asking for medical advice.

Not sure there is any way to contextualize this, but it’s from Maude:

And then in 1978, when Bain was in his mid-50s, Lear cast him in Diff’rent Strokes, as Philip Drummond, the millionaire businessman who adopts his African American housekeeper’s two sons, wisecracking Arnold (Gary Coleman) and his brother, Willis (Todd Bridges), after she dies. Lear had addressed abortion on Maude and lampooned bigotry on All in the Family; Diff’rent Strokes was progressive in a goofier, gentler way, presenting a benign vision of multi-ethnic blended-family life and talkin’ ’bout racism, sexual abuse, alcoholism, epilepsy, steroids, bulimia, and the dangers of hitchhiking, in a string of Very Special Episodes that defined that sitcom subgenre.

All three of Bain’s TV wards — Coleman, Bridges, and Dana Plato, who played his biological daughter, Kimberley — struggled to make lives for themselves after the show went off the air, which makes these episodes sort of hard to watch. Plato and Coleman both died young, and in interviews, Bain often talked like a man who’d lost two of his actual children.

The kids also met Muhammad Ali, Reggie Jackson, Dorothy Hamill, David Hasselhoff, Mr. T, Nancy Reagan, and Ed “Too Tall” Jones; Janet Jackson had a recurring role as Willis’s girlfriend Charlene, and characters from the Strokes spinoff The Facts of Life occasionally crossed back over into Arnold and Willis’s world. (The 1996 series finale of The Fresh Prince of Bel-Air featured Bain and Coleman playing Arnold and Willis as potential buyers of the Banks mansion; Sherman Hemsley and Isabel Sanford also turned up in this episode as George and Weezie Jefferson, retroactively establishing that all three of TV’s most famous black-class-mobility sitcoms — Fresh Prince, Diff’rent Strokes, and The Jeffersons — all took place in the same fictional universe.)

Philip Drummond could afford to take in orphans because he was, as the theme song put it, a man of means. He was head of Trans Allied, possibly the most mysterious corporate entity in sitcom history. We knew how George Jefferson moved up, but we never found out what Trans Allied did. Even when Phil’s new wife (a pre–Designing Women Dixie Carter) dares him to go Undercover Boss at one of his factories, all he does on the assembly line is stamp metal into widget-ready shapes. Were they a defense contractor? We found out in a
Very Special Episode from Season 4 that Mr. Drummond was descended from slave traders; did Phil open his home to precociously sarcastic African American orphans out of guilt?

Thanks to Diff’rent Strokes‘ success, Phil Drummond became, and remains, one of the most famous fictional old bald Caucasians in black American popular culture. Rick Ross has called himself the “black Philip Drummond,” Ghostface Killah bragged about staying in the “Philip Drummond suite” once, and Kanye’s “Otis” rhymes “I adopted these n***as, Phil Drummond them” with “tuck your whole summer in.” Pretty fly for one of television history’s whitest guys.