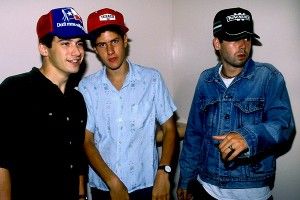 Adam Yauch died today. It wasn’t completely unexpected. He’d been first diagnosed with cancer, in his parotid gland and a lymph node, in 2009, and underwent surgery and radiation at the time. The then-upcoming Beastie Boys album Hot Sauce Committee, Pt. 1 was pushed back, and a bunch of tour dates were canceled. A few months before it was eventually released, under the title Hot Sauce Committee Part Two, in April of 2011, Yauch released a statement denying reports he was back to full health, explaining that he was still undergoing treatment and saying that he was optimistic he would be “cancer free in the near future.” When that album was released I attended a press event for it, and from the back of the room saw a frail Yauch, rocking a giant cowboy hat, proudly introducing the awesome “Make Some Noise” video he’d directed. I guess that ever since seeing him in person, looking unwell, I’ve had the thought, somewhere in the back of my mind, that Adam Yauch — of the Beastie Boys, my favorite band — might die young.

Not that thinking about it has helped me articulate how I feel about it. The basics are clear to me. I’ve loved the Beastie Boys, completely and intensely and obnoxiously publicly, since I was 14. Nothing about how I got into them is cool, or correct, but whatever — Hello Nasty had just come out, and the HMV at the Chestnut Hill Mall had it on one of the headphone listening stations. That first blast on “Super Disco Breakin’” — bam-bam-BAM-bam-BAM, bam-bam-BAM-bam-BAM, “well, it’s, 50 cups of coffee and you know it’s ON” — had me hooked, and I worked my way back through every last nook of the back catalogue, devouring every bit of Beasties lore, developing careful opinions on Mario Caldato’s production techniques, and co-opting Biz Markie as a personal hero along the way. I got a giant poster of the Hello Nasty cover — the Beasties packed like sardines in a tin, Mike D making googly eyes, Yauch and Adam Horovitz laughing at some private joke — and slapped it on the wall above my bed. It’s still there, in my bedroom at my parent’s house.

This afternoon I’ve had people texting and Gchatting me about Yauch, like I personally lost someone. I appreciate it, of course, but I feel ridiculous. I’ve spent an inordinate amount of time listening to his voice, but I didn’t actually know the guy. And then I felt guilty: Somehow I’ve communicated to people that know me that I have some deep connection to the man, and now I want to write about him, and I have no idea at all what I want to say.

Yauch wasn’t my favorite Beastie. That’d be Mike D, with whom I’d felt a kinship with ever since reading about how, during the debauched “Licensed to Ill” tour, Adam and Adam used to gang up and mess with him. I’d always felt like Ad-Rock was the best MC of the trio, adept at classic hip-hop shit-talking and bonkers referentialism, and possessor of a certain swag the other two couldn’t match. But it’s clear to me what Yauch was: Yauch was the leader. A small part of that was aesthetics; the premature graying hair, the permanent rasp. But it was also evident that the morality tale of the Beastie Boys — three genius New York City smartasses who grew out of Budweiser-crushing caricatures into three endlessly curious, wholeheartedly decent adults — was best represented by Yauch.

When I was younger I couldn’t see the point of MCA rapping about taking a sledgehammer and breaking his nine millimeter, or shouting out “all the mothers and the sisters and the wives and friends.” That shit wasn’t cool to me, or funny, which is mostly what I cared about back then. But MCA’s focus on unity and progression was at the heart of who the band was. Later, I would read the liner notes in the Beasties anthology, Sound of Science, for the track “Song for the Man,” a putdown of some macho street dudes, and it would make sense. Horovitz writes, “Listening to the lyrics of this song, one might say that the Beastie Boy ‘Fight for Your Right to Party’ guy is a hypocrite. Well, maybe; but I’d rather be a hypocrite to you than a zombie forever.” That was what Yauch represented, to the fullest.

It wasn’t just about growing into better, more ethical people, though. After Licensed to Ill, the Beasties had the balls to leave Def Jam and Rick Rubin and everyone that had helped build their preposterous debut success. They had the balls to drop their sound altogether, to leave New York, and to shack up in L.A. making gonzo, weirdo, overstuffed, and intricate creations that’d take most people years to come around to and understand. And it’d been like that ever since. Growth meant putting jazzy instrumentals next to balls-to-the-wall pass-the-mic workouts, or sampling monks, or reverting all the way back to their hardcore roots, if they felt like it. I won’t try to be comprehensive about why the Beastie Boys were such a rare thing musically, because I will fail at that. But I will at least try to communicate that the Beastie Boys — led by their chief, Yauch — were always fearless about their musical impulses.

I should hope that all my reverence here won’t take away from the fact that MCA could get straight silly on the mic. The Beasties had an in-house term for their ‘hey, we’re just completely talking out our ass here’ style, the doodoo rhyme, and Yauch has classic doodoos: “I keep my underwear up with a piece of elastic / I use a bullshit mic that’s made out of plastic”; “So like a pimp, I’m pimpin’ / I got a boat to eat shrimp in / Nothing wrong with my leg just B-boy limpin’”; “I got more rhymes than I got gray hairs.” And this seems like as good a place as any to point out that Yauch’s alter-ego, Nathanial Hornblower, was crashing stages way before Kanye. He had all the original ideas for Star Wars and everything.

Me and the Beastie Boys were always a pretty intimate thing, in my head, and so it’s been awesome to see, just in the last few hours, the outpouring of love for MCA. It reminds me of All Points West 2009, the year the Beastie Boys were supposed to headline. With the band a late scratch because of Yauch’s health, Jay-Z stepped into their slot. I was there, in the mud and the dirt, not expecting Jay to nod to the Beasties in any way. And so when the cock-rock guitars of “No Sleep Till Brooklyn” kicked in, and Jay dropped into a full-on cover — “Beastie Boys never on vacation!” — well, I will always appreciate him doing that.

Just about a year ago, I wrote an oral history of the Beastie Boys’ early days for New York Magazine. I got to sit down with Mike D and Ad-Rock, in a small Soho office, and shoot the shit for a couple of hours. It was glorious. They talked about going to Danceteria and scouring the ground for spilled money to buy drinks, and throwing insane Fourth of July parties out of derelict Chinatown lofts, and shacking up in one of their crappy apartments and writing rhymes together. They talked about how all three of them would have crazy ideas, and how Yauch was always the one to make them happen. And they took over the conversation. At some point I forgot I was supposed to be asking questions, and just watched, trying to repress my giggles, as they cracked each other up. Thirty years after they first started palling around, they still just wanted to make each other laugh. How insane is that? The basic fundamentals of the Beastie Boys — from day one, they’ve shared verses — represents such an impossible ideal. I was so happy to see that it was real.

I’m talking about the Beastie Boys in past tense on purpose here, because this is the official end of the band. There is no way these guys are gonna go on without Adam Yauch. And, other than “thank you,” I still don’t know what I want to say. I know one thing for sure, though: That Hello Nasty poster is never coming down.