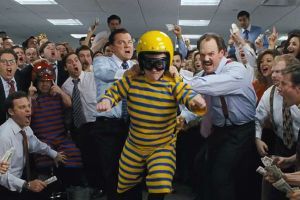 Let’s all go to the movies and watch people come apart at the seams. For the final HP episode of the year, Andy and I looked to the big screen to talk about three of the most critically acclaimed films of 2013: The Wolf of Wall Street, American Hustle, and Her.

Some handy supplemental reading material about Wolf can be found on Glenn Kenny’s Some Came Running blog. We discussed the online debate taking place in film critic circles about the moral compass of the film, whether it’s broken, and whether art really needs one of those damn things in the first place. We also talked about the virtuosic direction, career-topping Leonardo DiCaprio performance, and weird music cues. (Foo Fighters!)

We then chatted about American Hustle, which we both disliked, and Her, which I liked and Andy didn’t (so much). There’s also some vital Amy Adams chat.

We wrapped things up with a quick look at our favorite books of the year, and like 20 seconds about how Beyoncé is good. 2013 in a nutshell. Sell me this pen.

The Price Is Right Gives Away Its Biggest Prize, Contestant Has Exact Right Reaction