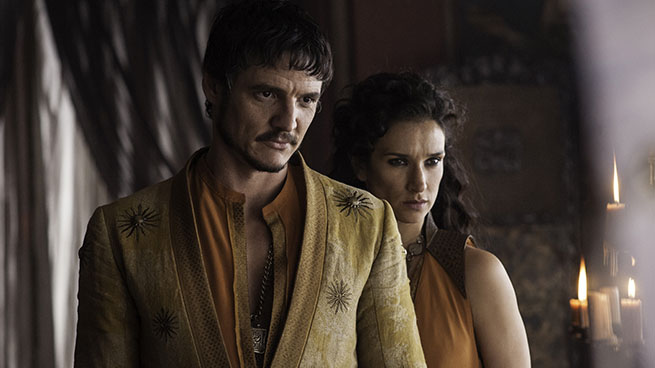 This is your week, Pedro Pascal! First you [redacted] that [redacted redacted] on Sunday night’s Game of [redacted] — and now you’ve landed your very own drama on the future’s favorite network, Netflix. Titled Narcos, the show will follow Colombian drug lord Pablo Escobar (Wagner Moura, of Elysium and Elite Squad) with Pascal as a DEA agent in hot pursuit. The 10-episode series (or first season) will shoot in Colombia, be directed by José Padilha (RoboCop), and should start streaming in 2015.

Kittens will not turn down for ANYTHING. Don’t even ask them. They’ll reenact the music video and destroy your home and melt your face if you do. [via]

David O. Russell’s next Jennifer Lawrence movie — Joy, about the inventor of the Miracle Mop — will hit theaters Christmas 2015.

Sticking with OITNB, and moving into a one-day-only special category, Genitalia-Comedy Supercuts, you’ve got all the show’s vagina references over at Vulture.

J.K. Rowling’s The Casual Vacancy has a cast, and it’ll be led by Dumbledore himself, Michael Gambon.

Apple might switch to its own special headphone jack. You’re a cruel master, Apple.

“If they, like, decided to abandon ship and try again years from now it would make more sense [than finding a director to replace Edgar Wright on Ant-Man].” –The Lego Movie/22 Jump Street co-director Phil Lord

Malefiftycent, because why the hell not, I guess.
https://www.youtube.com/watch?v=3bx-DBraNxc

In the Dumb and Dumber To poster, the Shaggin’ Wagon lives.

Nicolas Winding Refn’s next one is a horror movie called I Walk With the Dead.

And Forrest Gump is being rereleased in IMAX.

The Right Reasons Podcast: 'The Bachelorette,' 'Ladies of London,' and Fast Food