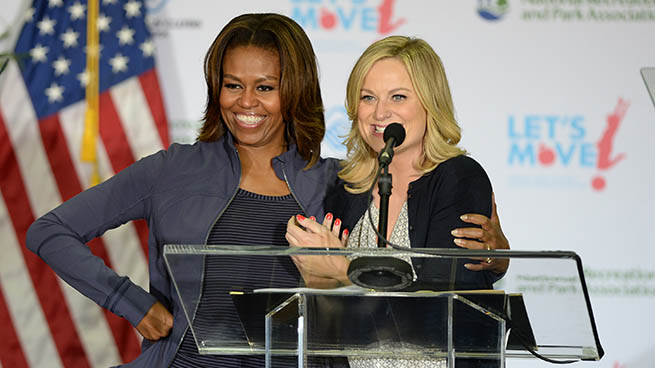 They got Biden. They got C.K. They even got Schrempf. And they had Swanson the whole damned time. But Parks and Rec is about to one-up every comedy around town with a Michelle Obama cameo in the hour-long Season 6 finale on April 24. The episode filmed in February in Miami, so that’s some stellar secret-keeping.

Keeping things vaguely political: Seth Rogen was on C-SPAN. Speaking at a Senate hearing. About Alzheimer’s. (Unfortunately it was pretty poorly attended. Get it together, senators.)

Jurassic World watch: Jeff Goldblum HAS NOT been called. Deduct two excitement points, replace them with one consternation bracelet.

Kanye West and Hype Williams filmed the Yeezus Tour and they’re sending it to theaters.

Schoolboy Q did “Man of the Year” on Arsenio:

Rihanna will release a concept album in tandem with — and about — DreamWorks Animation’s children’s movie Home, coming this November. If you expected that, kindly alert someone that you’re a prophet.

Daft Punk will tour for the first time in years, but they won’t get to use their craziest idea.

Obscenely casual Adam Sandler and Drew Barrymore sang a song about their every-10-years romance. (Great nod to Fever Pitch in there, too.)

Adore Lupita Nyong’o but don’t wanna see Non-Stop? Here’s everything she does in the movie.

David O. Russell evacuated the ABC country-club drama he was going to executive produce. The show goes on, though.