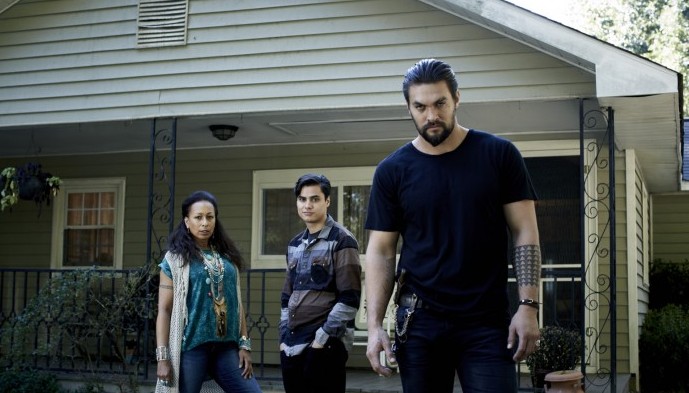 There’s nothing wrong with audiences falling hard for TV characters. It’s sort of the point. After all, it’s the electric appeal of the Fonzies and Urkels that keeps audiences enthralled, year after year, and producers in Malibu, royalty after royalty.

It’s more problematic when TV shows go wobbly for certain characters. Good drama ought to be complicated and it needs to push back against the rising tide of fan investment. And so while Tyrion gets all the good lines on Game of Thrones, he also gets slashed across the face and tossed into a dungeon. Breaking Bad addicts doted on Jesse Pinkman like a puppy, yet the show treated him like the worst kind of mutt. It should pain fans to see their favorites threatened. It should inspire creators. After all, games are no fun when the deck is stacked from the beginning.

So what to make of The Red Road, a six-episode drama series debuting tonight on SundanceTV? The show is ostensibly an ensemble piece, but it’s clear from the opening moments, as the camera lingers over the bulging biceps and fierce, gladiator mien of star Jason Momoa (that’s Khal Drogo if you’re nasty and/or a Targaryen), that there’s only one person who matters here. As ex-con Phillip Kopus, Momoa fills the screen — not his fault, necessarily; he makes normal clothes look like Bruce Banner’s pants — and dominates every scene he’s in, whether he’s stealing pills from an old-age home or a pit bull from Brooklyn. (He even dominates other parts of the business. The company responsible for putting The Red Road together? Kopus Productions LLC.) Momoa is a charming, surprisingly delicate actor; there’s something downright kittenish about him even though he’s built like a Voltron lion. Too bad that, in his presence, the rest of the show rolls over and purrs.

The Red Road is set in the wilds of northern New Jersey. Not Sopranos country, mind you, but a more rural, mountainous terrain lurking just across the Hudson River from New York state and inhabited by a very different sort of close-knit tribe: the Lenape Nation. In the pilot, local cop Harold Jensen (Martin Henderson) is torn between the search for an NYU student who went missing in the woods and the more pressing demands of his home life. His wife, Jean (Julianne Nicholson), is getting sober and hearing voices, and his elder daughter, Rachel (Allie Gonino), is caught in a song-free West Side Story with a Lenape teen named Junior (Kiowa Gordon). Into this medium simmer strides Phillip, Junior’s considerably older half brother, fresh out of the joint and ready to get back into the muck. When Harold is forced to cover up the near-fatal actions of his increasingly unhinged wife, Phillip steps in with a friendly offer of blackmail.

Though the story is shot through with the moral ambiguity we’ve come to expect from cable dramas — kind criminals, crooked cops, etc. — there’s plenty of detail in the margins that’s worthy of our interest. There are roaring tensions between the dwindling American Indian population (represented by Tamara Tunie, as Phillip and Junior’s mother, and Lisa Bonet, Momoa’s real-life wife, as an activist attorney) and the established white power structure (represented by M*A*S*H star Mike Farrell, as a politician who also happens to be Jean’s father). There’s pollution in the woods that’s suddenly making everyone sick. Tom Sizemore is alive and kicking as Phillip’s Bushwick-bound, drug-dealing father. And creator Aaron Guzikowski (Prisoners) and director James Gray do a nice job depicting the shabby ennui of young people growing up in a one-stoplight town just a train ride away from the intoxicating glare of Manhattan. But atmosphere only gets you so far. The Red Road is so enamored of its hulking lead that, eventually, everything else fades from view.

Things might be better if Guzikowski had provided Momoa with a worthy foil. But Henderson brings next to nothing to the role of Harold. Every time he attempts to stand up to Phillip — over fries at a roadside diner, in the waiting area of the police station — I’m reminded of the old Charles Atlas ads from the backs of comic books. Momoa doesn’t even have to raise an arm to get the upper hand. On the heels of memorable turns in Boardwalk Empire and Masters of Sex, Nicholson is her usual dazzling self. It’s just too bad to see someone so talented stuck on the margins. I can see why she took the role — there’s tons of juicy scene work involving creepy whispers and open windows — but part of me wishes she were the one going toe to toe with Khal Drogo, not just the Dothraki rampaging through her head.

I admire SundanceTV’s commitment to telling quieter stories — thanks to Top of the Lake, Rectify, and The Returned, no network is riding a hotter streak. But there’s a difference between being respectful and passive. From beginning to end, The Red Road lets Jason Momoa walk all over it, trampling any potential for conflict or spark. The best shows can dazzle us with strong characters. But strong characters can crush weak shows.