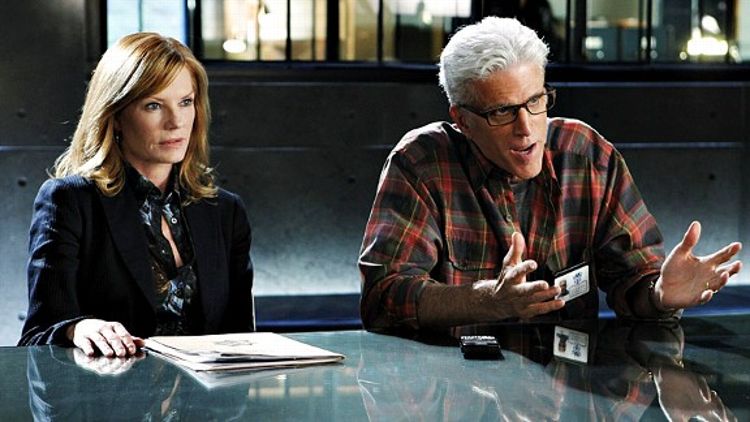 CSI (CBS), “Zippered” (Wednesdays at 10 p.m.)
“When the CSI team discovers a deceased rancher was also a ballistics expert, they have to work with the FBI to solve the case.”

CSI: OG has popped out 250-plus episodes over the past 12 years, so you really can’t fault its writers for turning in limp, by-the-numbers plot lines every once in a while. Here’s a suggestion, though. CSI writers: Whenever you’re too drained to come up with anything more than a boring linear murder with some minor tension, how about calling us to suggest nutty additions in the interest of spice and variety? For example, in the situation above, I would have recommended making the deceased rancher/ballistics expert also someone who eats faces. What do you say?

Body of Proof (ABC), “Your Number’s Up” (Tuesdays at 10 p.m.)
“When a recent lottery winner is found brutally murdered, everyone becomes a suspect. Guest starring Chef Robert Irvine (Restaurant Impossible).”

The murdered lottery winner is fine and everything, but I’m particularly excited about Robert Irvine. That’s the dude who got famous for catering on Dinner: Impossible, then was fired by Food Network after it turned out he lied about having a bunch of connections to the Royal Family, including “that he helped bake the cake for the fairytale wedding of Prince Charles and Princess Diana, held the title of Knight Commander of the Royal Victorian Order, and that his friend, Queen Elizabeth II, had given him a castle.” And then, when all seemed lost in a heap of cake/castle lies, Irvine was rehired. It’s an amazingly dramatic arc which now comes to its logical peak, with a guest spot on Body of Proof. Congrats, Rob. You’re a fighter.

Hawaii Five-0 (CBS), “Pahele” (Mondays at 10 p.m.)
“McGarrett and the Five-0 search for a busload of kidnapped school children as well as the people responsible.”
The Mentalist (CBS), “The Redshirt” (Thursdays at 10 p.m.)
“Jane and the CBI investigate when a retired NFL star quarterback is presumed dead after his car blows up. Meanwhile, while preparing for a court case, Rigsby and Harrigan take their relationship to the next level.”

There’s an odd symmetry at work this week, with two pairs of procedurals thinking along parallel tracks. The problem, then, is that Hawaii Five-O’s “children in peril” and The Mentalist’s “troubled ex-NFLers” plot lines are easily trumped by …

Criminal Minds (CBS), “Self-Fulfilling Prophecy” (Wednesdays at 9 p.m.)
“The BAU team looks into the real reasons behind an apparent mass suicide of a small group of youths at a military academy. Also, Hotch and Morgan butt heads when a team member could be in jeopardy.”
Law & Order: SVU (NBC), “Spiraling Down” (Wednesdays at 10 p.m.)
“A military colleague of Detective Amaro’s wife reports his 14-year-old daughter missing. The detectives find the girl working as a prostitute under a possessive pimp. They quickly set up a sting operation to entrap Johns on rape charges with a minor, and arrest aging pro quarterback Jake Stanton (guest star Treat Williams). Detective Benson and ADA Cabot seek to make an example out of the football legend, but the case is thrown into chaos with the return of defense attorney Bayard Ellis (guest star Andre Braugher), who questions Stanton’s mental capacity after years of injuries on the field. Special appearances by Jerry Rice and Warren Sapp.”

… Criminal Mind’s “children in peril” and SVU’s “troubled ex-NFLer” plot lines! First: A hijacked school bus just doesn’t pack the same punch as, you know, mass suicide. Meanwhile, The Mentalist’s not-too-shabby exploded QB gets utterly owned by SVU. Treat “The Substitute 2: School’s Out” Williams as a concussed sex trafficker? Warren “Dancing With the Stars” Sapp and Jerry “One Tree Hill” Rice showing up for dramatic cameos whose awkwardness potential is too great to be calculated? Week in and week out, SVU continues to brings the hot sauce.

CSI: Miami (CBS), “Crowned” (Sundays at 10 p.m.)
“The CSIs expose the seedy underbelly of children’s beauty pageants when a contestant’s mom is murdered.”

This week’s big winner, though, is a plot line perfect in its simplicity. Anyone who has caught even the briefest of glimpses of TLC’s Toddlers & Tiaras (maybe while waiting for Extreme Couponing to come on?) knows children’s beauty pageants are already the creepiest things on the planet. Really, the murder is superfluous; the CSIs should be focusing on the abusive mothers. David Caruso: “The question is, are these kids being ruined for life or” [sunglasses] “just until they get some therapy in junior high?” [Yeaaaaaaaah]