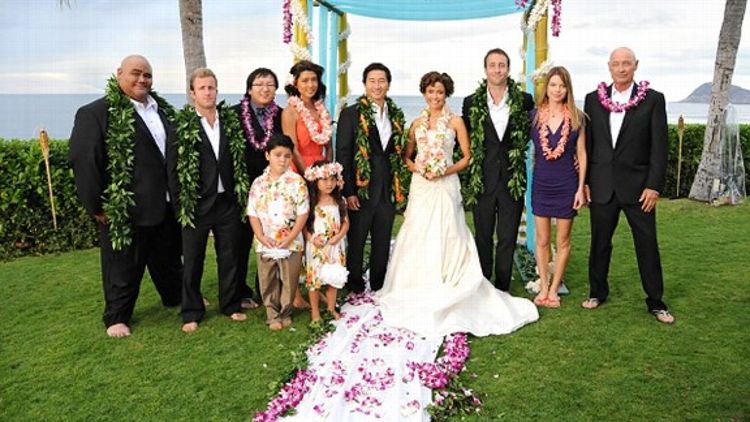 Hawaii Five-0 (CBS), “Alaheo Pau’ole” (Mondays at 10 p.m.)
“On the eve of Chin Ho’s wedding to Malia, the Five-0’s investigation into a man left for dead in an abandoned WWII bunker crosses paths with Capt. Fryer’s case of a Jane Doe. Tom Sizemore Returns as Capt. Vincent Fryer.”

A bittersweet week here for the Murder Forecast, as many of the procedurals are turning in their season finales. Which means this is as good a time as any to pay tribute to Hawaii Five-O which, in just two seasons, has become – thanks to its idyllic location shots and creative deaths – an honored member of the procedural community. As for the actual episode, it looks like we’re in for some historic bunker deaths but mostly wedded schmaltz. On the plus side, it’s always nice to see Tom Sizemore continuing to defy the Celebrity Rehab curse. (By the way, I was just now confirming that Tom was indeed on that show, and found this sentence on his Wikipedia page: “On August 18, 2005, approximately eight hours of celebrity sex tape starring Sizemore was published on the internet.” Mr. Sizemore!)

NCIS (CBS), “Newborn King” (Tuesdays at 8 p.m.)
“On Christmas Eve, when a Navy captain is killed in a hotel room, NCIS must track down and protect his very pregnant companion from unknown assailants. Meanwhile, Jimmy has problems of his own when he brings his future father-in-law to work.”

“Pregnant assassin-target” sounds promisingly suspenseful, but it’s network television so you know she’s going to be home safe in time for Leno. By the way, this is the ninth season finale for NCIS. To put into perspective, that means Willow Smith – bless her talented, lucky heart – has basically never known a world without NCIS.

Criminal Minds (CBS), “The Bittersweet Science” (Wednesdays at 9 p.m.)
“The BAU team investigates a string of brutal bludgeonings in Philadelphia and is led to the city’s boxing scene in search of the killer. Also, Hotch makes a connection with an attractive runner/art curator as they both train for a triathlon.”

String of brutal bludgeonings! If this wasn’t one of the most promising bits of capsule preview the Murder Forecast has ever seen, it would make a fantastic name for a post-hardcore art-rock band. (On that note: if you are in a post-hardcore art-rock band that is currently looking for both a name and a timpani player, get at me). Points deducted, however, for falling prey to a classic romantic comedy cliche with the art curator love interest. Mindy Kaling parodies and explains:

“Art Gallery Woman: ‘Dust off the Warhol. You know, that Campbell’s Soup one in the crazy color! We have an important buyer coming into town, and this is a really big deal for my career. I have no time for this!’”

CSI (CBS), “Genetic Disorder” (Wednesdays at 10 p.m.)
“When the body of a naked dead man is discovered by Dr. Robbins’ wife in their master bedroom, it leads to a lot of questions for the CSI team.”

Questions like, ‘Who killed this guy? Why is he naked? How did he get pec mucles like that? Which specific sexual deviancy sub-community did he belong to? Are there any more Honey Nut Cheerios in the kitchen downstairs?’

The Mentalist (CBS), “Fugue in Red” (THursday at 10 p.m.)
“During the search for a firefighter’s killer, Jane is attacked and nearly drowned, resulting in a temporary loss of his memory and a return to his pre-CBI con man persona.”

Check out The Mentalist, pulling out the stops for its own series finale. Personality-reverting memory-loss? Really? There is nowhere to go from here but to an “evil twin long presumed dead comes back, only it turns out he’s the good twin, and we’ve been living with the evil twin the whole time” subplot.

Prime Suspect (NBC), “A Gorgeous Mosaic” (THursday at 10 p.m.)
“When a Jewish diamond dealer is found dead, Jane looks for answers from his wife. Blando and Jane investigate some rappers in Brooklyn after getting a strong lead. Meanwhile, Matt gets a huge job and surprises Jane with a celebration.”

Allow me to keep it 100 about something: a few years back, me and a friend developed a personalized handshake, which we still very much use, based primarily on a handshake we saw two fake rappers on Law & Order: SVU do. Which is my way of saying that, you can come to mock the hilariously misguided caricatures of Brooklyn rappers we’re getting on Prime Suspect this week; you may yet walk away having learned something.

NCIS: LA (CBS), “Higher Power” (Tuesdays at 9 p.m.)
“The NCIS team must locate a classified device with the power to destroy Los Angeles that was stolen from a college research facility. Meanwhile, Sam tries to track down a highly sought-after Christmas present for his daughter, and Eric meets Nell’s parents.”

Holy crap: weapons of mass destruction? Swinging for the fences, NCIS: LA. This is just the kind of crazy stuff you feel comfortable trying to pull off when you have the eternal swag of Chris O’Donnell on hand at all times.

Viral Video of the Day: "Boardwalk Empire State of Mind"