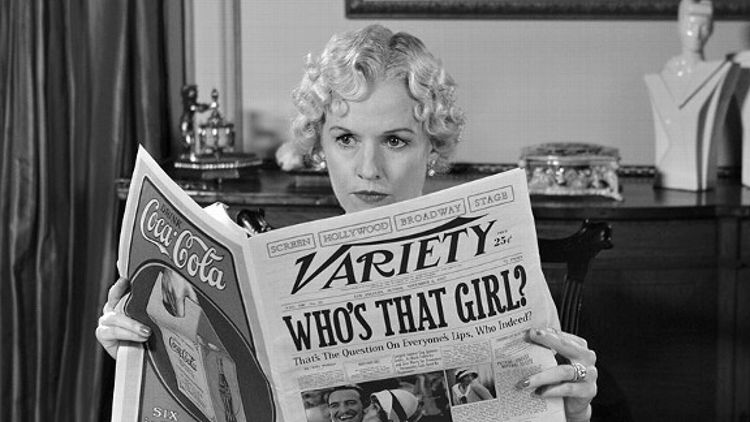 What a frenetically busy weekend it was in the handing out of shinies and sparklies and mantel-trinkets to chronically underappreciated movie people, who at other times of the year often have to survive for weeks without winning anything. Critics’ groups in Los Angeles, Boston, and San Francisco announced their honorees, as did online critics in New York; conclaves in Detroit and Houston revealed their lists; and the American Film Institute named its 10 best movies. That’s a lot of noise! All of these simultaneously live-tweeted prizelets are microtwitches in the Oscar race, and it’s true that come ballot time, no Oscar voter is going to find himself frozen in indecision, his pen hovering above his ballot as he frets, “But dare I go against Detroit?” However, it’s still possible to pull some larger trendlines from this surge of hyperbolic over-celebration of film achievement. And if it’s not, let’s pretend it is.

What happened: The Artist and its director, Michael Hazanavicius, won prizes from Boston and New York Online, and two previously unhonored movies got on the board as well: The Descendants took the top prize in Los Angeles (becoming the third Alexander Payne film to score that group’s Best Picture award) and L.A.’s runner-up, The Tree of Life, won that group’s Best Director prize, as well as Best Picture and Best Director from San Francisco. Martin Scorsese won Boston’s Best Director prize for Hugo, and finished second in L.A.

What didn’t happen: Some Oscarwatchers thought this weekend would mark the beginning of a clean sweep for The Artist, the way that The Hurt Locker began its march to a Best Picture win two years ago, and The Social Network began its march to a Best Picture loss last year. Instead, we now have a more entertaining scenario, with the first three biggish prizes — New York, L.A., and the National Board of Review — going to three different movies: The Artist, Hugo, and The Descendants. Fun fact: This three-way split happened three other times in the past 10 years. Even more fun fact: One of those three times, the eventual Oscar choice was “none of the above.”

The year that happened, 2002, contains some noteworthy parallels to the current head-to-head-to-head battle. That year, the prelims went to About Schmidt (L.A.), The Hours (NBR), and Far From Heaven (New York). But the Oscar went to Chicago, a movie that, not incidentally, grossed $50 million more than the three aforementioned movies combined. This matters because if The Descendants, Hugo, and The Artist have one thing in common, it is a perhaps perilous degree of box-office vulnerability. Hugo added 800 screens this weekend and still saw its grosses drop — it just isn’t particularly clicking with moviegoers. The Descendants increased its screen count by 50 percent and still couldn’t improve its take from the previous weekend. And The Artist has taken in only about half of what The King’s Speech did last year in an identical release pattern — indicating that, as it widens, it may perform more like an offbeat, charming curio than an emotional people’s-choice steamroller.

How much of a role grosses play in Oscar victories depends on the kind of movie in the contest. Voters are willing pick a low-grossing Best Picture winner if its modest take feels connected to its uncompromising nature (for instance, The Hurt Locker), but they’re less likely to vote for a movie that’s intended to be a crowd-pleaser but can’t draw crowds. If that’s the case, perhaps there’s room for a four-quadrant box-office stallion to assert itself as a compromise choice over the holidays. Which points to … War Horse. A couple of other, shakier contenders, the (adjective embargoed) Extremely Loud and Incredibly Close and Girl With the Dragon Tattoo, will also try to do with audiences in a couple of weeks what they didn’t manage to do with critics’ groups this weekend.

Failing that, The Artist probably stays out in front. The Weinstein Company will have to eyeball the grosses and time things with its customary shrewdness in figuring out whether the best pitch to the Academy is “America is falling in love with this movie!” or “We’re counting on you voters to rise above vulgar populism and recognize this rare and precious jewel.” Don’t underestimate Harvey’s ability to effect that transition in a heartbeat when a statuette is within reach.

What happened: It was a good day for Moneyball’s Brad Pitt (who won Boston and, at the moment, feels to me like the narrow front-runner), Take Shelter’s Michael Shannon (who won New York Online and placed second in L.A.), and Michael Fassbender (who won L.A. for Shame — though the group also cited his work in A Dangerous Method, Jane Eyre, and ridiculously, X-Men: First Class). Tinker, Tailor, Soldier, Spy’s Gary Oldman won San Francisco and saw a gratifyingly robust opening for his movie on four screens. And George Clooney took second place in Boston for The Descendants and didn’t really need to do more.

What didn’t happen: All the goodwill in the world for The Artist has not yet translated into a win for its appealing star Jean Dujardin, who I think will be nominated for Best Actor but may have a hard time winning. That’s partly because the competition is impressive, partly because the role doesn’t allow for either powerhouse emoting or great nuance (not because it’s silent, but because it’s sketchily conceived), and partly because, though it’s absolutely not his fault, he’s an unknown quantity in a category where a selection is often a vote of faith that future performances will justify the present honor. Nobody in the Academy wants to revisit that hangover-horror moment when they woke up in bed the morning after giddily casting their lot with a foreign stranger and found themselves face to face with Roberto Benigni. It was also not a good day for J. Edgar’s Leonardo DiCaprio, who will need the Golden Globe nomination he’s likely to get later in the week to stay in the conversation, or for Rampart’s Woody Harrelson, who is suffering from the fact that his movie isn’t in theaters when it most needs to be.

What happened: In a race that’s still wide-open, prizes were won by My Week With Marilyn’s Michelle Williams (Boston), The Iron Lady’s Meryl Streep (who added New York Online to last week’s New York Critics Circle win), and We Need To Talk About Kevin’s Tilda Swinton (who now has wins from the National Board of Review and San Francisco). Los Angeles, which likes to use the Best Actress Award to demonstrate how independent-minded it is (but tellingly, never the Best Actor Award, because that’s, y’know, important) gave its prize this year to the Korean actress Yun Jung-hee for her perfectly fine performance in a little-seen festival favorite called Poetry. She is the eighth non-American in nine years to take the prize; Melancholia’s Kirsten Dunst came in second.

What didn’t happen: At this point, the fact that The Help’s Viola Davis has not won anything is beginning to stick out. How meaningful is it for her Oscar chances? Not especially — all it signifies is that print critics can’t quite bring themselves to give a prize to The Help. The real tell will be how Davis fares in three of this week’s coming nomination rosters, the Broadcast Film Critics Association (where Sandra Bullock’s Blind Side surge started two years ago), the Screen Actors Guild, and the Golden Globes. Two other actresses, though, may have seen their hopes diminish a bit: Charlize Theron could have used a win to offset news of the slightly-softer-than-hoped opening of Young Adult this weekend, and after a burst of festival excitement, Glenn Close isn’t getting the “It’s her moment” heat that she needs to stay in the mix for Albert Nobbs. Could she still bounce back with a nomination? Sure — right now, I’d say Davis, Streep, and Williams each have a fairly firm grip on spots in the final five, and the remaining two slots are very much up for grabs. We’ll know more by week’s end, when all four acting contests will be in much sharper focus.

A Final Note: On Margaret

Remember last week when I promised to stop beating a dead horse? Well, the horse is alive. The weekend’s single biggest surprise may have been this year’s fascinating underdog Margaret, which came close to winning four awards in Boston, placing third for Best Picture and second for Screenplay, Ensemble Cast, and Supporting Actress. That showing inspired the Boston Society of Film Critics to issue a stern and fully deserved public rebuke to Fox Searchlight, noting that Margaret “could have won several awards” if its own distributor had not been so intent on treating it like kryptonite that many of the group’s voting members were unable to see it. Do you get it now, Searchlight? Do you think it might be worth making it as easy for Academy members to see this movie as it is for them to see Tower Heist (literally, I’m looking at the “For Your Consideration” DVD right now)? Or do you want to persist in what now looks like the most petulant awards-season behavior by a studio since Universal tried to deep-six Terry Gilliam’s Brazil? It’s hard to imagine that the makers of the movies you’re pushing — The Tree of Life, Win Win, Shame, The Descendants, and Martha Marcy May Marlene — would have anything good to say about a fellow filmmaker being frozen out this way. So come on: Do the right thing and press some DVDs; it won’t bankrupt you or Rupert Murdoch.

Previously: Oscarmetrics: Hugo, The Artist, and 2011’s Faux-Nostalgic Race for Best Picture
Oscarmetrics: The Case for Drive, Margaret and The Interrupters