Joke About Hatsune Miku’s Imminent Takeover While You Still Can, Dave Letterman 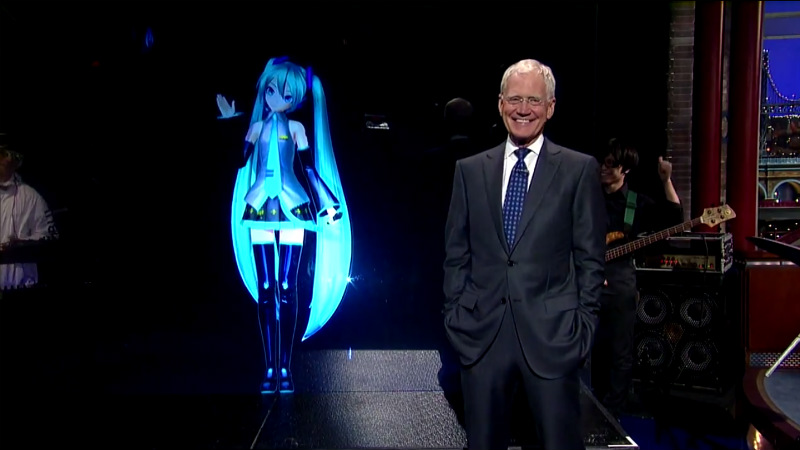 You’ve got to hand it to David Letterman’s bookers. Their taste tends to be both up-to-the-minute and pretty good; equal parts mainstream, Pitchfork and Random Shit on the Internet. More importantly, they don’t seem to give a second thought to weirding out 90 percent of their demographic on a regular basis. Last night in a landmark event for both American late-night television and vocaloid divas, Hatsune Miku, Japan’s (and the universe’s?) first virtual pop star, made her U.S. TV debut on the Late Show to “perform” “her” “song” “Sharing the World.” And indeed, during those three minutes, worlds were certainly shared.

Whether or not you had heard of her before seeing this performance, Hatsune Miku always makes you feel weird, which is kind of the appeal. The first time I saw video of her, performing in front of a packed crowd robotically waving glowsticks at her, I felt a jolt in my stomach, that feeling you get any time your universe expands a little and you realize there are things happening on this very planet right now that you have little to no clue about. That was a few years ago; now holograms are somewhat commonplace (It’s 2014! I can type that sentence without irony! What a world!), but the idea of accepting them as named entities — Miku is a “she,” not an “it” — is still bizarre-feeling territory.

Dave, for one, welcomed our new vocaloid overlords, with a more-than-a-little-mischievous smile at his likely baffled studio audience. “It’s like being on Willie Nelson’s bus,” he quipped, allowing everyone to relax and laugh — it’s OK, this is insane, we all can acknowledge that. And, to be fair, it’s easy to treat it as a goof, because there’s not really an imminent threat of holographic stars taking over pop music. Miku remains a more or less singular oddity, a curiosity from endlessly meme-able Weird Japan.

It’s hard to imagine the artificial-intelligence-pop-star thing catching on globally, because there’s not really a demand for it — we still have Ariana Grande, after all. But then again, all it takes is a good sales pitch for us to be convinced of something’s obsolescence. Maybe a hundred years from now the human voice will be seen as woefully passé. In the meantime, Miku, like plenty of flesh-and-blood pop stars before her, is already crossing over into hip-hop. Rich Gang ft. Trap Goddess Miku, hitting the streets in 2015, you heard it here first.