Handicapping The Bachelorette: Six Burning Questions From ‘The Men Tell All’ 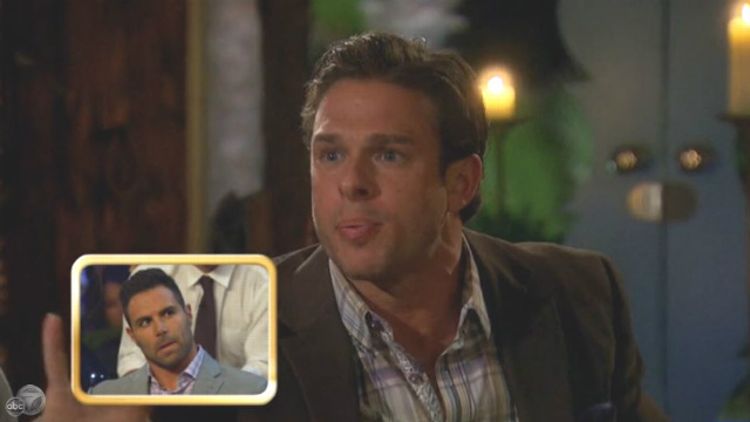 Even though there are two more real episodes to go, The Bachelorette aired its “Men Tell All” special last night. Desiree was forced to face the duds dudes she broke up with, and Chris Harrison confronted them about all of this season’s drama. For the most part, things we already knew were confirmed: Everyone hates Ben, James did it for the wrong reasons, Kasey sucks, and Des is terrible at faking emotion (to her credit). Nonetheless, a few questions arose. Like me, you’re probably wondering why Des wore a denim button-up shirt on top of a white button-up shirt. This is one I can’t answer at all, so let’s focus on the less-perplexing queries.

What did James say that Kasey repeated that got bleeped out?

James and Kasey (and Mikey T. too) continued the fight that began in Germany. You’ve probably forgotten by now, but the “big controversy,” to use Harrison’s words, was whether James was on the show to win Desiree’s heart or to set up his own Bachelor campaign. The guys rehashed the same points: James claims he was just being realistic, Kasey claims James was there for the wrong reasons. Things got (momentarily) exciting though when Kasey accuses James of saying, “This guy [EXPLETIVE] [EXPLETIVE] off camera.” After upward of 10 rewinds, I’m fairly confident that the first bleeped-out word was “sucked” and “this guy” is Michael G. Kasey points at Michael, who is sitting beside him. If there is one thing we’ve learned about James, it’s that the strategy of “deny deny deny” is not something he’s familiar with, because he responds with a smile to say, “I was mad!” He doesn’t try to explain it or take it back at all, and maybe that’s because … Well, let’s just move on.

How do we get a Mikey T. spinoff?

Here’s what we learned about Mikey T. last night: He may or may not be interested in “tall girls with a lot of money,” he doesn’t appreciate being a “player on the cover of Us Weekly,” and he stands by his boy James. Yet I still have so many questions about him. I need to know more. As far as we know, Mikey T. is a plumbing contractor in the Chicago area, which makes him ripe for his own HGTV show. Better yet, why isn’t there a show about James and Mikey T. searching for intimate settings in Chicago already in production? Chicago is a great city that is underrepresented on reality television. Who do I need to ask to get this going?

Why did Zak W. write a song?

Zak W. must have watched the show back and felt that Chris’s poetry was receiving too much screen time. Zak refused to let the show marginalize his own creative pursuits, so, of course, he wrote a song for Des and performed it last night. I believe this is the second consecutive episode with a musical performance and third overall. This is an extremely generous comparison, but the ditty reminded me of a very poor man’s version of “When You Say Nothing at All” by Ronan Keating, so perhaps Zak is a Notting Hill fan. Even though he’s from Texas and works on an oil rig, I never would have guessed that Zak would go the country route. That may be strategic though, because when we inevitably see him at the blind auditions on The Voice, he may be able to attract Blake Shelton’s interest, and Blake is a proven winner. Even though Zak currently suffers from a broken heart, he has seamlessly set up his transition into the talent show reality world. Kudos to him.

Why wasn’t Juan Pablo depicted as a father?

The Bachelor franchise loves single parents. Single dads and single moms are ordinarily guaranteed screen time and GRTFL points. So why didn’t we get more Juan Pablo this season? Apparently he was a fan favorite, and he seems to spend a lot of time with his daughter — so much so that she dominates his responses to Harrison’s questions. I suspect his dedication to his daughter would endear him to fans even more. The producers haven’t given him enough depth to set him up as the next bachelor, so I don’t understand why “Men Tell All” rewrote the Juan Pablo narrative. He went from Latin lover to Latin father, and now I fear we will never hear from him again.

The show began with what seems like a new tradition: Harrison and the bachelor(ette) “crashing” watch parties. The fun began with a party bus in Los Angeles, and continued in New York, except Chris ditched Des for Part 2. Instead she had alumni Jason and Molly (and their new baby), Ashley and J.P., and Trista (no Ryan) along with her. Now that Harrison has his own clothing line (the Chris Harrison Collection by Da Vinci is not available online at this time) and a dating app (called At First Sight, co-created with Bachelor executive producer Mike Fleiss), is he too busy for all his TV commitments? This is the second time this season that Des had to soldier on without him. He was mysteriously absent for their arrival in Madeira. Chris needs to get his priorities straight.

Who were all those guys on stage?

All of Des’s guys, save for the remaining three, were present for “Men Tell All,” including Jonathan the creep, Will the guy with bare bookshelves, and the guy who looks like the lost Hemsworth brother. Yet only a few of the guys got to speak or received any meaningful screen time. At least on the Survivor reunion shows everyone gets to talk, even if for a few moments. Last night’s special was a reminder of how abysmal this crop of dudes has been. There are Internet rumors suggestions that one-F Jef will be our next Bachelor. Hopefully that will be true.

The Curse of the Gilded Diaper: Understanding America's Fascination With Famous Babies