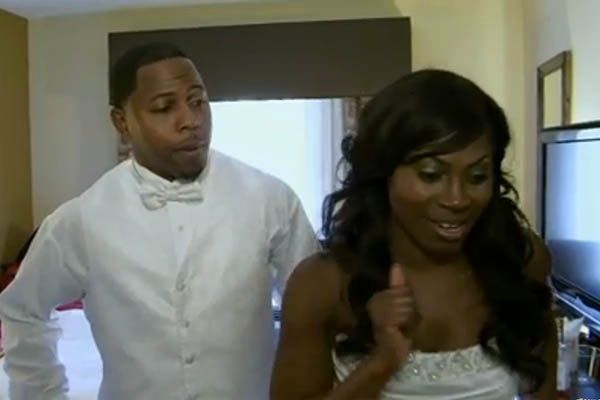 Who Is This Now? Brian and Miyesha.

Why Are We Watching Them? They’ve exhausted their patience with the Bridezillas production.

How Did They Get Here? She’s demanding and he’s kind of a doormat — you know, the usual.

What’s the Grossest Thing We See? An earlier segment involved Miyesha meeting with the wedding photographer (accompanied by a couple of bridesmaids), agreeing to upgrade the photography package, and asking the photographer to give her a fake invoice to give Brian so he won’t know she’s decided to spend $1,100 more of his money. This information gets back to Brian, and to punish Miyesha, he calls her and pretends that he’s lost his job, so the wedding might be off for financial reasons. When he lets her in on the ruse, she acts like she might call off the wedding — so by the time the day actually arrives, both of them just want to get the whole thing over with, with the consequence that they (somewhat understandably) no longer feel like slowing down the proceedings by stopping to give interviews to the Bridezillas producers. Admittedly, Miyesha and Brian are not polite about it, but they repeatedly tell producers to turn off the cameras and that they no longer want to participate. But the producers keep basically ignoring their requests and pushing questions until Miyesha remembers that she and Brian paid for the limo and that they don’t need to give producers a lift: They have the driver pull the car over, kick the crew out, and get on with their lives.

What Have We Learned? The only thing worse than a bridezilla is a reality-TV producer.

Why Are We Watching Her? She’s getting ready to marry her boyfriend A.J.

How Did She Get Here? Nicole and A.J. have dated on and off, and apparently keep breaking up when he cheats on her. But now that Nicole’s just given birth to A.J.’s new baby and is overwhelmed by the idea of raising all her kids, including a newborn, on her own, she’s decided to forge ahead with A.J. despite her own better instincts and the disapproval of her loved ones, including her mother and her own eldest daughter, Mariah.

What Have We Learned? I wouldn’t have expected one of the pregnant moms to have her life in worse disarray than her pregnant teen, but here we are.

Why Are We Watching Him? His girlfriend Abbey is telling their therapy group about her eating disorder.

How Did He Get Here? The dozen-year age difference and Joe’s work as a pornographer may not have provided the couple the most stable foundation for their relationship.

What’s the Grossest Thing We See? In previous episodes, Dr. Jenn Berman has pointed out that one of the major issues in Joe and Abbey’s relationship is his need to control her. So when Abbey opens up about how her bulimia started and Joe breaks in to say that he wants to help her by making her eat pasta, Dr. Jenn explains that Abbey needs to be in charge of her own food — and Joe’s response is to roll his eyes before grudgingly agreeing.

What Have We Learned? Abbey needs not just to leave Joe but to enter witness protection.

Who Is This Now? Seth, Rob, Chris, and Marlon.

Why Are We Watching Them? They’re getting ready to have a no-strings-attached night out.

How Did They Get Here? Having married Bridezillas (as in, former stars of the WE tv series Bridezillas), they’ve had problems in their marriages, and are in couples’ therapy to try to work them out.

What’s the Grossest Thing We See? As a final exercise (read: test), the boot camp directors have taken away all the participants’ wedding rings and required them to sleep apart — the ladies upstairs, the men in the living room. The idea is to spend the night in quiet contemplation, and then reunite the next day so that they can decide whether they want to stay together. But as soon as the women have gone upstairs to their room, the guys decide that the best way to spend an evening without their wedding rings is to go out to a bar — and to stuff pillows and/or blow-up dolls with their faces on them (props from an earlier exercise) so that if their wives come out, they’ll think their husbands are still there.

What Have We Learned? Marriage isn’t for everyone.