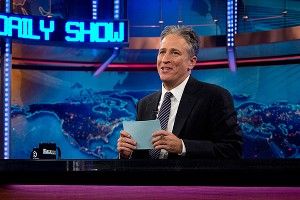 Jon Stewart has spent the summer in Jordan shooting his directorial debut, Rosewater, an adaptation of Iranian journalist Maziar Bahari’s memoir Then They Came for Me, about his captivity in Iran’s infamous Evin Prison following the 2009 elections. (Gael Garcia Bernal stars as Bahari. Could be good!) In that time, John Oliver proved himself as something more than a stopgap measure: In a few short months, the cheeky Brit convinced a nation of skeptic Stewart diehards that — if that tragic day did come, and Stewart did leave — the show would be in very capable hands. (And what about his own future career prospects? Was this just the campaign he needs to launch The Semi-Weekly Show With John Oliver?) But forget all that for now. For now, let’s focus on that long-desired day: Jon Stewart is back! On last night’s broadcast, our man finally came home.

And he wasted no time being funny. In this first bit, a now Middle Eastern’d–out Stewart has to be recalibrated for America. At one point he dresses like Hitler, and that’s always a good time.

In this second bit, Stewart gets earnest for a few minutes, thanking Oliver and the cast and the audience, and expressing just how genuinely happy he is to have returned. And then he has to figure out how to make jokes about Syria. And all is back to normal.