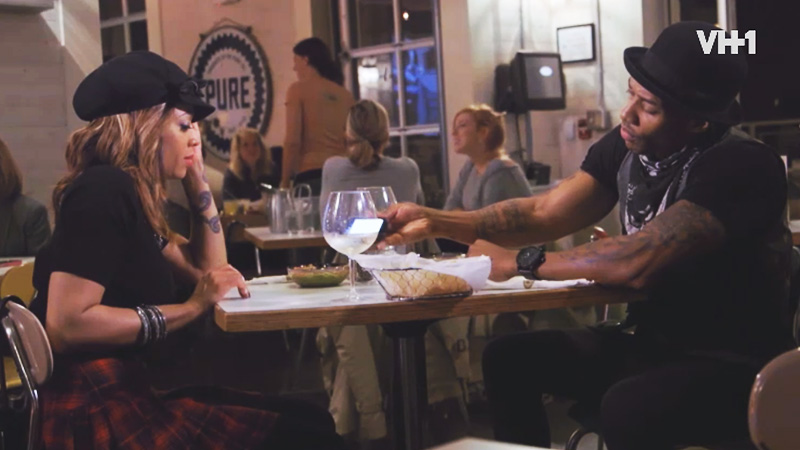 What the hell IS Love & Hip Hop: Atlanta? Is it a scripted drama? Is it an unscripted comedy? Is it a docu-series? Does it take itself seriously? Do the people making it and distributing it feel guilty about it? Am I laughing with or at the cast? Do the people who appear on it think it’s a good look for them? How the hell did Waka Flocka watch Season 1 and say: “If that show comes back, that looks like something I need to be a part of”? Is there a relationship on this show in which the man isn’t cheating? Exactly how scripted is this: Curb Your Enthusiasm scripted or Seinfeld scripted? Are we supposed to believe that ANY of this is real? How does Atlanta feel about how this show makes the city look to the rest of the world? Will the aliens/plants/zombies/Oprahs who eventually take over the world track our demise back to the release of Season 1, 2, or 3 of this show? Is anyone else surprised that Rasheeda and Kirk’s kid didn’t come out like Stannis and Melisandre’s Smoke Monster Assassin from Game of Thrones?

Rasheeda and Kirk’s baby is definitely not a Smoke Monster Assassin; Rasheeda and Kirk’s baby is actually an adorable human child, but that’s what’s so troubling. The show can fake Stevie J and Joseline’s marriage, Lil Scrappy’s beef with Stevie J, everyone’s occupation, and 90 percent of the female cast members’ body parts, but IT CANNOT FAKE A HUMAN CHILD. There he is for the world to see, all adorable and swaddled up and being parented by a rapper and her on-camera philandering husbandager. The show also can’t fake a sex tape, or the subsequent heavy-duty shower rod shortage that tape created. But it sure can orchestrate the whole thing.

Let me back up a bit to provide some crucial background: Two of the show’s “stars” released a sex tape a couple weeks before the season debuted (convenient), and it made national news. It seemed like a typical attempt by two folks who were stuck in the shadows to creep closer to the spotlight, and nothing more. At least until the Season 3 premiere, in which the major story line focused on how Mimi and her man Nikko had started filming their sex. That focus quickly shifted to how their luggage had gotten stolen, and it will eventually shift to them putting out a sex tape. Do the producers honestly think we’re dumb enough to believe all of this just HAPPENED TO OCCUR while these people had cameras on them? I honestly don’t think they’re trying to trick us; I think they know we’re happy to suspend disbelief so we can enjoy this stupid show a little more. In a way, it’s insulting; in another, it would only really be insulting if I DIDN’T enjoy the show … and therein lies the problem.

I know this show is fake. I know this show is bad for the impressionable young people who watch it. I know this show is evil at its core. But I still love it. Even though it’s bad for me and everyone around me, I can’t stop enjoying it. It’s my US Weekly, my doughnut, my drug. Love & Hip Hop: Atlanta is heroin: You can’t tell anyone who doesn’t do it that you do; you have to keep it away from children; and once you partake, your life will never be the same. Proceed into VH1’s Monday night time slot with extreme caution.

This week, Terrible-Haired Spencer perfectly summed up both the audience’s and the cast’s feelings about Tony with his comments: “I’m getting to know a ton more about him, and I like him, but I still think Tony is lying to everyone all the time out here, and he’s good at it. Going forward, it’s tough to work with him out here because he’s sly, he’s playing harder than anyone, and he’s very, very dangerous.” Not since the Dawn of Stassi has a single person dominated a season of reality TV like Tony is dominating this season of Survivor. At this point, there’s very little question he’ll tally the victory. In fact, this week’s GRTFL Top Five is a list of the Top Five Reasons Tony Will Win This Season, listed from “That’s merely an advantage” to “Are we sure he isn’t related to Probst?”

5. He knows when people lie: I don’t think Tony is as smart as he thinks he is, but he can definitely smell a lie like a fart in a car. This week Stony Woo tried to lie to Tony, and Tony wasn’t having it.

3. He’s the focal point of nearly every scene: He practically narrates the show, he masterminds every vote, he NEVER SHUTS THE FUCK UP, and even when other people go to get water, he dominates the scene by spying on them. And, oh yeah, he finds every Idol. I’m surprised he hasn’t started wearing blue performance button-ups and hosting the show.

2. He’s been shot at three times: Or not. Nothing this guy says is true.

Jordan and Bananas (The Challenge), 45 points

Since The Challenge is America’s fifth major sport, it’s only fitting that it get its own version of Kevin Durant versus LeBron James, and that’s what it now has in Jordan versus Johnny Bananas. Jordan-Bananas is such a fitting rivalry because both men seem to employ the same “I will just mask this here insecurity by doubling down on confidence” coping mechanism, and it makes for great theater.

After Bananas easily disposed of the underperforming Isaac in this week’s elimination challenge, he turned his attention to Jordan and declared: “You won’t just be missing a hand after you come in here; I will take your head off.” Now, that’s a bullshit comment; I know I do it every other column, but it isn’t cool to make fun of a person for something he or she can’t control. Besides, there’s so much else to make fun of Jordan for. Later, to prove he wasn’t a completely soulless individual, Bananas semi-apologized, then added, “But I do want to rip your head off” for good measure.

If you sat through this week’s shit stain of an after-show, you got a look at a miniature “This season on … ” that included a lot of Jordan-versus-Johnny footage, culminating in Jordan flipping over every “Kill Card” to ensure he goes against Johnny in an elimination challenge. This is our Pacquiao versus Mayweather, our Brady versus Manning, our College Dropout Kanye versus Kanye Kardashian. I can’t wait. If they do that whole cliffhanger ending for the Jordan-Johnny draw, I’ll picket outside Bunim/Murray headquarters until they show me that shit. Fucking try me, Bunim/Murray.

It’s true I’ve always been a Laurel apologist, but I mean it when I say she is actually making this outfit work: 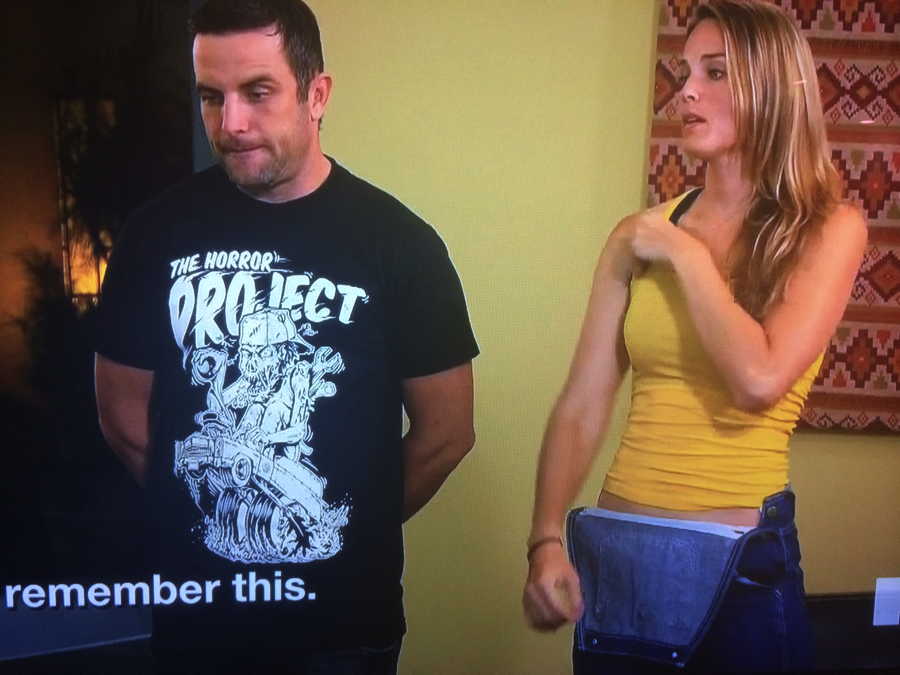 Does she look like she’s going to a TLC concert in 1992? Yes. Does she also kind of look like a sexy farmer’s daughter? Yes. Are those things mutually exclusive? I guess not. Shout to you, Laurel. Also, thank god T.J.’s ugly graphic tees are back. I was starting to get concerned.

You know how the contestants sometimes get doughnuts and beer for food rewards, and you’re sitting there asking yourself, “Would I even want to consume that if I were starving myself on national TV?” Well, this week’s reward was perfect: burgers, hot dogs, and a visit to a local elementary school. It even broke down Terrible-Haired Spencer: “I’m not really a kid person, and I will be the first to say that I don’t really like kids, and it was a little overwhelming having all these little monsters swarming me.” It was beautiful. I honestly think the excitement all those kids showed would have given me just as much energy as the burgers. Stony Woo felt the same way: “Today’s reward was a phenomenal opportunity to give back to the Filipino community and be an ambassador for Survivor, and the moment we come out, it is just MOBB DEEP of all these beautiful young people. It was phenomenal!” Queensbridge, stand up! Stony Woo with a shout to Hav & P!

As if Stony Woo couldn’t get any more likable, he went ahead and broke out his best Hot Sauce handle for the kids:

Seriously, when did this become so popular? And when will it end? 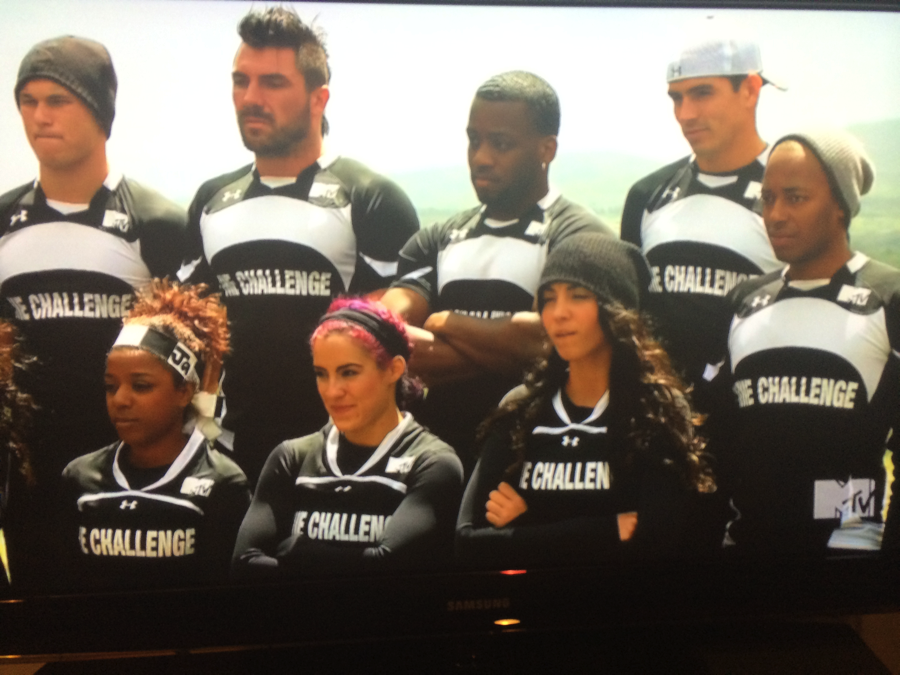 I’ve always found Kass unlikable, but I couldn’t put my finger on exactly why until this week, when my wife blurted out: “Kass is annoying, but the most annoying thing about her is her lack of upper lip.” I like how she made it clear that the lack of upper lip is merely at the top of a long list. The tip, or lip, of the annoying iceberg.

TV Preview: 'Penny Dreadful' Is Anything But Cheap