TV Preview: ‘Penny Dreadful’ Is Anything But Cheap 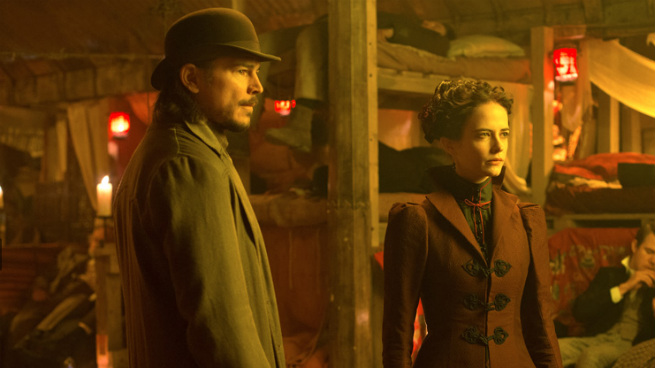 Many things about Penny Dreadful, Showtime’s Gothic horror drama that debuts at 10 p.m. EST this Sunday night, are familiar. It isn’t just the late-19th century fictional oddities who pop up in the first two episodes — including Victor Frankenstein, Dorian Gray, and basement-dwelling vampires — who give you déjà vu: There’s a whiff of From Hell, a monster-mash structure like The League of Extraordinary Gentlemen, and enough tangled and mysterious plots to remind you of the endless drama punches of American Horror Story: Asylum. Because Penny Dreadful establishes early on that it knows what it’s doing, these references come off as more than a little tongue-in-cheek, and they work.

The show’s title comes from Britain’s serialized pulp novels of the 1800s, cheap reads that featured gruesome stories (Sweeney Todd was one), appealing to a mass market that either couldn’t afford or didn’t care about Dickens or Charlotte Brontë. Penny Dreadful maintains the over-the-top gore of discount lit while oozing elegance. Its sets and costumes are so opulent that it seems a particular shame when a prostitute coughs blood all over them, like a partygoer from The Age of Innocence bending in half and then chewing off Daniel Day-Lewis’s arm. It’s all so classy until somebody’s guts spill onto the floor.

Class is something the creative forces behind Penny Dreadful know well. John Logan, Penny‘s creator, is co-producing with his Skyfall colleague Sam Mendes, and the show stars former James Bond Timothy Dalton and Casino Royale star Eva Green as Sir Malcolm Murray and Vanessa Ives, a pair of mysteriously linked demon hunters. The performances are mesmerizing, even when the pace stalls  — which it does, sometimes, distractingly. The pilot contains more than a few moments that would be climactic if they’d been trimmed by even just a few seconds; a shot of Dr. Frankenstein (Control‘s Harry Treadaway) trying to bring his monster (another Bond veteran, the great Rory Kinnear) to life is filled with the kind of plot-advancing lightning flashes that make time pass at half-speed. For the most part it’s forgivable, as is Billie Piper’s (Dr. Who) fluctuating Irish accent as Brona Croft, because everything still gets where it’s trying to go, and takes you along with it.

Josh Hartnett’s American gunslinger Ethan Chandler seems like he might be a mash-up of penny dreadful regulars Deadwood Dick and Buffalo Bill. Chandler gets roped into helping Sir Malcolm and Vanessa with their dirty work, and seems to be the most accessible character at first, but Green quickly establishes herself as the scene-stealer, and she is handed a couple of doozies in the pilot (only one involves spiders). Green is fearless here, and (along with the full-frontal male nudity — we PAID for this cable, after all) her intensity creates the kind of exciting and surprising moments that push Penny Dreadful beyond its tamer competitors. The most suspenseful and unpredictable elements come from the performances, so when a scene starts to drag there’s still something to hang on to. I could watch Simon Russell Beale’s rouge-cheeked Egyptologist Ferdinand Lyle (his wife is out of sight and over by the gin, wherever the gin may be) read the hieroglyphic phone book.

Gathering all of these brooding personalities also makes for interesting dynamics. Frankenstein and his monster, named Proteus, share a palpable sexual tension (is this just me? It can’t be!), and Dorian Gray (Spider-Man: Turn Off the Dark‘s Reeve Carney) will probably have sex with everybody. Gray is rocking some seriously modern hair, and in a fuchsia-striped waistcoat he looks like he’s a time-traveling emo guy on his way to a formal wedding. Gray and Lyle keep the tone from veering into oppressive heaviness, though we already know there’s a lot of darkness behind Gray’s layered coif.

The world of Penny Dreadful is colored with a literal anxiety (Jack the Ripper headlines are still circulating among its citizens), but Logan also hopes that the show will capitalize on our current worries about the rise of technology. Penny dreadfuls changed the reading habits of the masses just as blog posts and immediate, free click-bait has changed ours. Penny Dreadful is luxurious Gothic fan fiction, but after just two hours, it proves why that might not be a bad thing.