Getaway Trailer: Ethan Hawke Gets His Taken, by Way of Drive, With a Little Spring Breakers Tossed in 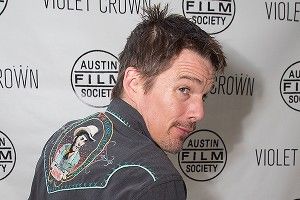 As of this weekend, Ethan Hawke will have two movies in theaters: the lovely, pensive Before Midnight, and The Purge, set in a dystopian future in which one day of the year all laws cease to exist and everyone can do as much murderin’ as they want. To say this man’s career has developed in, uh, unforeseen directions would be an understatement. Now here comes Getaway, which may have already won the special distinction of being the nuttiest Ethan Hawke trailer of all time. A kidnapped wife, à la Taken, with a mysterious voice on the phone (that sounds somewhat like Taken 2’s Rade Serbedzija but is actually British actor Paul Freeman). Instructions from the evil voice, just like that phone-booth classic Phone Booth. Then a reveal: Hawke can drive like the wind, and his skills are in need (NOTE THE DRIVE TOOTHPICK). Boom: Selena Gomez, dressed like mid-2000s Eminem, with a leftover gun from Spring Breakers, is a carjacker, and now she’s in this shit as well. I mean — I wish I could see this RIGHT NOW. By the way, the trailers have been getting pulled down, so if it’s still up by the time you get here, go ahead and consider this top-secret information.