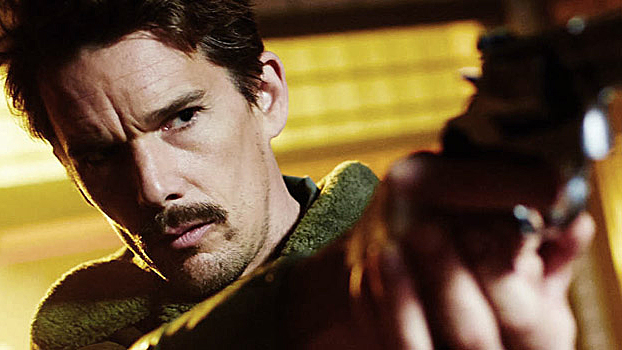 With the success of Boyhood, Ethan Hawke is having a bit of a moment. He was nominated for Best Supporting Actor — his second nomination in the category! — and his movie will likely take Best Picture, unless the Academy decides to go electric and give it to Whiplash, or Clint Eastwood rigs the vote and American Sniper wins, in which case it’s been a good run, movies, but we’ve gotta put you down.

An interesting byproduct of postlapsarian Hollywood is that, with the movie-star system gone mostly bunk, there’s more room for experimentation and fiddling. Actors of Hawke’s ilk, which is to say famous but not super-famous, respected enough to get nominations but not so revered as to be untouchable, can act in pretty much anything without damaging their reputations. There’s little need to maintain the sheen of major-studio prestige or blockbuster-ism. The movies have always been forgiving of serio-dramatic experimentation for male “stars,” but an actor of Robert Pattinson’s tabloid-king Q rating doing The Rover, or superhero-extraordinaire Chris Evans leading a Korean action movie, feels new, or at least representative of the new new.

Hawke’s position is no different, and it’s given us Predestination, a movie that I almost certainly wouldn’t be writing about if it didn’t star Ethan Hawke. Predestination is the work of Australian brothers Michael and Peter Spierig, who wrote and directed an adaptation of Robert A. Heinlein’s short story “All You Zombies.” The movie was financed and shot in Australia; alongside Hawke, the brothers Spierig cast veteran English character actor Noah Taylor as a spymaster and relative newcomer Sarah Snook as … well.

Predestination is a science fiction movie, mostly. It also has elements of crime, existentialism, and film noir. But its major device is time travel, putting it in a subgenre that, thanks to Shane Carruth’s Primer, Duncan Jones’s Source Code, and Rian Johnson’s Looper, has been thriving over the last decade or so. While it isn’t as good as any of those three films — which isn’t an insult, since Primer’s a masterpiece, and Source Code and Looper are legitimately great — Predestination brings to the party a taut, compelling script and a confidence in itself that carries you through occasional absurdity and melodrama. And with surprising lightness, it also deals with themes like gender identity and free will that would over-ballast most other quick-moving thrillers.

Playing a grizzled, too-old-for-this-time-travel-shit type, Hawke shows that he’s capable of shepherding a film: He can be the emotional Scotch tape that MacGyvers everything together, giving a charming and unshowy performance without getting in the way of what makes a production special. In this case, that distinction goes to, on one level, the temporal high-dive that makes up the movie’s backbone, and, on another, the performance of Sarah Snook. Snook reminds me of Amy Seimetz, Carruth’s muse in Upstream Color. Snook plays with a confidence that covers insecurity, and her style is skeptical, layered, and aggressive. Particularly considering the degree of difficulty in the role, Snook does a remarkable job shouldering the bulk of the reveal; if the movie had less than Snook and Hawke in its two leads, there’s a good chance it would’ve gotten mired in the weirdness of its plot.

If you’re the type of person who vivisects Primer for errors, or watched Coherence — last year’s remarkable, underrated sci-fi gut punch — looking for inconsistencies, then I’m guessing you’ll destroy Predestination, which isn’t exactly Brian Greene. But that type of person is probably reading a subreddit about True Detective right now, so I’ll just assume you enjoy fun. Predestination is fun. And while Ethan Hawke didn’t produce it, or play any role outside of starring, it’s his reputation that’ll lead most people to it in the first place.

Death and Permafrost: The Excellent 'Fortitude' Takes the Crime Show to the Arctic Circle