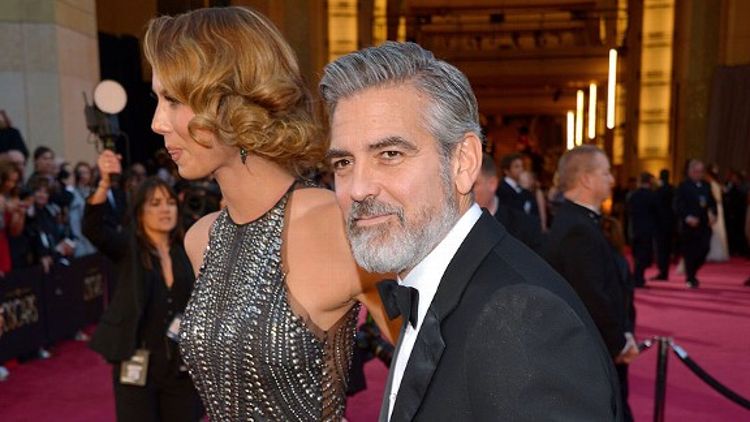 George Clooney & Stacy Keibler’s “Months Without Sex” Before the Breakup: When Keibler and “George Clooney, 52, split, they hadn’t had sex in months. He’s been in Europe and she’s in L.A., and they haven’t seen each other in a long time. Some girls would be OK with that and just be happy dating George, but not her.” Well, what’s in it for her, besides lots of publicity? Stacy pretended she was cool with things being casual, but “held out hope she’d be the one to tame the famous bachelor.” When his two-year dating limit ran out, she was toast. “She knew he wasn’t looking to get married. But there was always that fantasy that he would commit. Sadly, it just ran its course.”

Rob Lowe Shades White House Down: “I’m not really into a bubble gum romp about our White House being destroyed.” Neither was anyone else, Rob. But hey, you were in The Stand, which is about the whole country getting wiped out! Tsk-tsk.

Avril Lavigne & Chad Kroeger: The unholy duo made it legal on Canada Day “at a lavish ceremony in … France.” Complicated! “It was an all-night party.”

Jason Biggs: “A favorite gift was a bucket of just red Skittles.” OK.

Kerry Washington: “I have three best friends from high school who have made it their job to remain unimpressed by everything I do.” That is a hard job! Oh, she also got surprise married to San Francisco 49er Nnamdi Asomugha, who nobody even knew she was dating (they have been dating for three years).

Johnny Depp on Parenting Teens: “[It’s] frightening because you still have memories of … the things you might have been doing at that age … ‘Please don’t do what I did.'”

Lena Dunham: “Our costume department has realized that if they want me in underwear, they have to provide them.” Reminiscent of when Tallulah Bankhead refused to wear underwear during the filming of Lifeboat and Alfred Hitchcock said, “I don’t know if this a matter for the costume department, makeup, or hairdressing.”

Misc/Etc: “like I was walking in a cloud” “One of each!” “He has Eric’s chin dimple!” “a Scandinavian tag meaning ‘knot'” “One humps my pillow daily” “I was conceived at Disney World” “My best friend married my wife’s sister” “clean, mean, glorious breast milk” “A long way from the Peach Pit!” “What the hell is that doing there? That definitely wasn’t there before!” “showed her sunburned bum” “Moo or veggie?” “Bro-ing out!” “If you’re spending your twenties chasing the next party, what are you running away from?” “He’s admitted that Melissa blew him” “she is through with bad boys” “They’re both so hot it should be illegal” “North will be immersed in her Valley girl roots” “Sometimes I’ll throw my glove on and stand in front of the mirror.”

Jen & Justin Are Fine, Thank You: Over the Fourth of July, “Jennifer Aniston and Justin Theroux went to lavish lengths to show that their relationship is still setting off fireworks.” After “rumors of a split after disagreements over their careers and where to live,” they made up and celebrated the holiday together. On break from shooting The Leftovers for HBO, he flew back to L.A. and the couple “threw a major shindig at their pad (which has been updated with a chicken coop and herb garden)” with catered BBQ for “sun-soaking guests” to enjoy.

“Jen and Justin definitely didn’t seem like they had any problems in their relationship at the get-together.” Even if they did postpone the wedding, “they are still madly in love. The long distances these past few weeks just cemented those feelings.” Aniston and her “leather-loving fiancé” spent the rest of the holiday weekend chilling out (with bong hits).

Ben Affleck Casting A J.Lo Lookalike for His Next Film: “GOT BOOTY? BEN’S HIRING!” Oh yeah? Is this the L.A. X … Press? “Star has learned that Ben Affleck is keen on casting his ex-fiancée’s doppelganger for his upcoming film Live By Night.” Ooh, Hitchcockian.

“Ben’s on the hunt for the most beautiful Latina actress he can find to play the role of Graciela.” The script specifically describes Graciela as “the next Jennifer Lopez.” And casting will be extensive. “Ben’s written some very spicy sex scenes, including one steamy bathtub romp, for his character Joe and Graciela.”

Affleck’s wife, Jennifer Garner, “isn’t thrilled that her hubby is now sifting through heaps of gorgeous young women who resemble J. Lo.” Define “sifting.” Didn’t Ben learn anything from Gigli? Can he just cut himself into Out of Sight? Does he know he can just cast the real Jennifer Lopez?

Denzel Washington Caught Cheating on His Wife? “If marriage is a marathon and not a sprint, Denzel Washington may finally be nearing the finish lines: After decades of battling infidelity rumors, friends say the actor’s wife, Pauletta, has reached her breaking point.” In the early 2000s, rumors persisted that Denzel was “having an affair with his Out of Time costar Sanaa Lathan, 41.” Sanaa has denied it, but “insiders on the film set revealed that there was an immediate connection between the two that continued during filming.”

Pauletta and Denzel have been married since 1983 after meeting on the set of his debut, a TV movie called Wilma. “In early June, Pauletta, 62, became furious after hearing rumors that the 2 Guns actor was looking cozy with a pretty blonde at a house party near their Beverly Hills home. She confronted him and once again he denied he did anything wrong. She always wonders if he’s cheated and how many times. It’s something that consumes her mind.”

Denzel’s rep denies everything, but “a reconciliation seems unlikely, as they recently celebrated their 30-year wedding anniversary on different coasts, with Pauletta staying in their Manhattan apartment and Denzel in their L.A. home.” Pauletta has “had enough. She moved to New York to contemplate if she’s ready to end the marriage for good.” Denzel is worth a hundred and fifty million, so if it does go down it could end up being “one of Hollywood’s most expensive divorces.”

Chris Rock’s Marriage Might Be Over: Chris has been married to Malaak Compton-Rock for 16 years, but Chris’s brother Tony Rock spilled that they have split. “Tony poked fun at his brother’s divorce during one of his acts. He said, ‘I’m not supposed to tell y’all this, but Chris is getting a divorce. I’m so happy because now we can get pussy together. I didn’t like her anyway.'” Tony, I’m not sure Chris is going to answer your calls for a minute after you snitched on his business! Insiders say “the Grown Ups 2 star, 48, grew tired of having to answer to 44-year-old Malaak. There’s been many arguments behind closed doors. Malaak is very controlling and demanding.” I thought you loved your wife!

John Mayer Cheating on Katy Perry? “Katy Perry and John Mayer reunited just in time for the Fourth of July, but the notorious lothario is already seeing other women behind her back! John hasn’t changed. He’s still a womanizing jerk. The second he’s away from Katy, he’ll text and call girls. He has no intention of being faithful — and she has no clue.” Don Draper problems. “While kicking off his Born & Raised tour in Milwaukee on July 6, John, 35, declared his love for Katy, 28, by dedicating his song ‘A Face To Call Home’ to her.” He gushed “To Katy, who is my face to call home.” But insiders say “the rocker may just be good at putting on a show. He doesn’t like being alone. He needs constant validation from women.” WHO DOESN’T THOUGH AM I RIGHT?

Misc/Etc: “It’s the classic stepmonster dilemma” “her limelight-loving baby daddy” “Producers have made it clear that they expect a wedding and a baby” “this cartoonish tat is anything but swaggy” “not positive and downright depressing” “She can’t handle Shay being more important than her, so she’s simply stopped speaking to her” “with a peppy stencil in such an intimate spot” “turned out more scary than saucy” “DEBBIE DOWNER DAUGHTER” “Even the sun sets in paradise!” “Arrogant Adam Levine” “It’s aboot time!” “Single men at the men’s singles finals!” “No skimpy string bikini for this girl!” “Pop star or pretzel?” “He wants the publicity” “he isn’t very chivalrous when in the public eye” “WILL A BABY END THE TWITTER FEUD” “the blonde beauty is miles away from being over the hill”

Lamar Odom Cheating on Khloe Kardashian: Although Khloe looked happy during a Fourth of July photo shoot with her mom and sisters in Malibu, she may have been “putting on a brave face.” She was “blindsided when cryptic reports alleging that her husband Lamar Odom, 33, has been carrying on a yearlong affair with another woman.” The gossip was reported on TerezOwens.com, and Khloe started tweeting “ominous posts that hinted at trouble.” The couple haven’t been seen together in more than a month.

J.Lo in Turkmenistan: “Jenny from the Eastern Bloc? Jennifer Lopez found herself in the hot seat after singing at the June 29 birthday party of Turkmenistan president Gurbanguly Berdymukhamedov.” Lopez sang “Happy Birthday Mr. President” to the dictator, 56. “Turns out the ruler has been accused of human right violations while reigning over the former Soviet territory.” WHOOPS. Maybe she’s part of an Argo operation!

Kate Moss Uses a Body Double: “Kate Moss is one of the world’s most stunning supermodels, but the 39-year-old used a much younger stand-in to film some scenes during a commercial shoot in London.” SCANDALOUS.

More on the Keibler/Clooney Split: Stacy Keibler “grew tired of George calling the shots. Everything was on his schedule — if she didn’t make the move to see him, they didn’t see each other. He wouldn’t come to see her. It was all him. But that’s the way George is. He kind of thinks that just making you his girlfriend and giving you all that comes with that is enough and so he doesn’t need to do more work on the relationship.” Well then maybe he should just hire an escort!

Misc/Etc: “I’ve had the greatest lovers ever!” “Few women would want their ex dating their close friend” “piercing eyes, floppy hair, and artfully maintained facial scruff” “gleefully flee from the police” “the iconic 1976 Athena Tennis Girl poster” “photobombed by an overzealous fan” “I want to be thinner than ever!” “He’s thought she was a cool girl for a long time, but she was Kristen’s friend” “He’s been in a relationship for a long time, he wants to enjoy himself now.” “If you don’t like me, don’t talk to me” “no longer a teen queen” “FROM WAR HERO TO SUPERMODEL”

Kanye’s Baby Rules: “No ‘corny’ baby music or lullabies are allowed to be played in the nursery. Classical music or instrumentals (some composed by Kanye) are preferred.”

Taylor Swift’s Stage Banter: “I’m Taylor. I write a lot of songs about my feelings and I just realized that 42,000 of you just signed up for two hours of hearing about them.”

Mariah Delaying Her New Album: “I got so immersed in the creative process that I just don’t feel I would be doing it justice to release it.” OK.

Misc/Etc: “Miley is fierce in Versace” “PHOTOGENIC FRIENDS” “first promoting abstinence, then getting pregnant at age 17” “Just your average 43-year-old mom of two!” “Mwah mwah for the camera!” “RIRI GOES GEEK CHIC!” “She’s a little allergic to his hair” “Unless you are contractually obligated, it’s often wise to part ways before any blood spills” “She’s put Eric on a sex band, which he thinks is hilarious because Jessica is the one with the explosive sex drive” “I self-tan all year but in the summer even more so” “gotten a new nose while she was recovering”

Oldboy Trailer: Spike Lee Shows You All New Ways to Use a Hammer