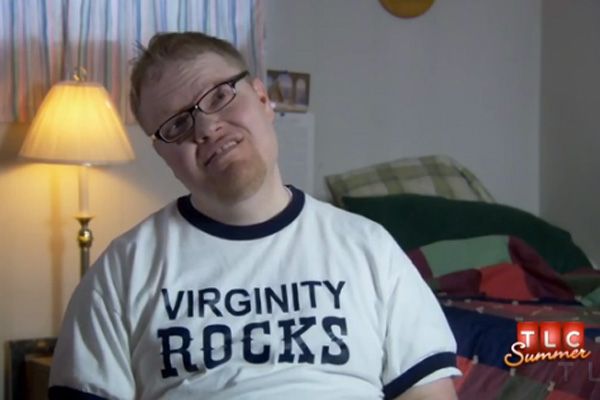 Who Is This Now? Skippy.
Why Are We Watching Him? He’s a 34-year-old virgin on the prowl.
How Did He Get Here? The issue is partly that he’s Mormon, so he hasn’t had sex for religious reasons. The bigger issue is that he is extremely awkward and creepy around women. How awkward and creepy? Well, he brings his mother to a dance with him; makes her wear a T-shirt that reads “WING-MOM”; dances with girls she picks out for him; tells the girls his mother picked them out; and says things to them like, “If you’re wondering if I’ll go on a date with you, my answer’s ‘yes.'” He also gets so sweaty from even minor exertion that he brings a blow-dryer with him to the dance and uses it on his body in full view of anyone who might be crossing through the lobby. It’s rough, guys. Rough.
What’s the Grossest Thing We See? Not only has Skippy been saving his navel lint for years (“for fun,” he says), but he keeps it in a jar that’s completely visible when he does (somehow) manage to invite a woman back to his … room in the basement of his mother’s house.
What Have We Learned? The “Forever Alone” meme guy is modeled on a real guy: a 34-year-old Mormon virgin named Skippy.

Who Is This Now? Wesley.
Why Are We Watching Him? His scrotum weighs somewhere in the region of 160 pounds, and gets a pound heavier each week.
How Did He Get Here? He suffers from a condition called scrotal lymphedema, which he can’t get corrected because (a) he says he can’t find a surgeon willing to perform the necessary operation (though a urologist featured in the episode offers to help him find a surgical team, and a chyron reports that “Wesley remains hesitant”), and (b) he couldn’t afford it anyway.
What’s the Grossest Thing We See? Due to network decency standards, we don’t see the actual scrotum, except tied into the hoods of hooded sweatshirts Wesley has turned into makeshift pants (he puts his legs in the sleeves), or draped under a T-shirt when he’s at home. But his home health care worker, Passion, describes cleaning his diseased scrotum, including digging into crevices she says can be up to an inch and a half deep. We also hear that his scrotum has grown up over his penis, making urination very messy.
What Have We Learned? Do not, under any circumstances, ever let your health insurance lapse. Just don’t.

Who Is This Now? Emanuelly.
Why Are We Watching Her? She’s about to have her second child, and wants maternity concierge Rosie Pope to find her a wet nurse.
How Did She Get Here? She had such a difficult time breast-feeding her first child (perhaps due in part to the fact that she has breast implants) that she ended up using formula, but she’s getting so much breast-feeding pressure from her family and friends that she’s aggressively investigating paths to getting breast milk into her new baby by any viable means necessary.
What’s the Grossest Thing We See? After Pope determines that wet nurses are illegal in the state of New York, she hooks Emanuelly up with a breast-milk-sharing collective. And since there are different “flavors” of breast milk available from donors (spicy, vegetarian, kosher, etc.), Emanuelly is invited to taste-test samples.
What Have We Learned? Sometimes giving back to the community is gross. (Also — as Pope finally helps Emanuelly to realize — if breast-feeding doesn’t work out, feeding a baby formula doesn’t make a woman a bad mom.)

Who Is This Now? Laura.
Why Are We Watching Her? She’s hoarded her home into an enormous fire trap.
How Did She Get Here? When her marriage ended and her sons moved across the country (the latter having occurred 20 years ago), Laura started collecting worthless junk to give herself “comfort.” Now she tells her sons that having a two-foot-high layer of garbage covering every floor in her house makes her feel “cozy.”
What’s the Grossest Thing We See? Streaks of an unidentified brown substance all down the front of Laura’s kitchen appliances are pretty revolting, but they’re nothing compared to the bottles of congealed, months-old milk sitting out on the countertop. (Though at least they didn’t travel far from the appropriate room in the house — not so the year-old jar of spinach salsa in her bedroom.)
What Have We Learned? Maybe things would have been better for Laura in the long run if the fire that started on her stovetop during cleanup had just burned the place down so that she could start anew.

Tara Ariano thanks God every day that she doesn’t have to wear a hoodie as pants.