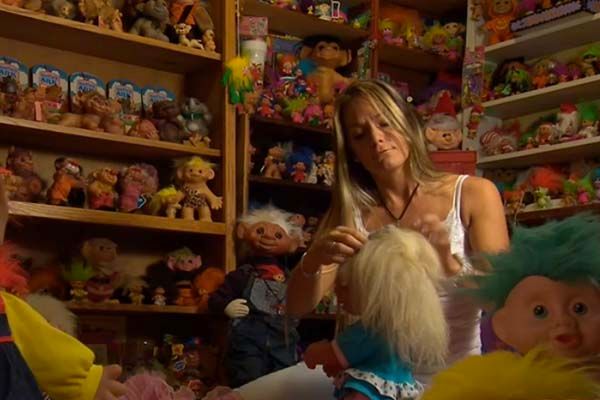 Why Are We Watching Her? She’s showing off her collection of 3,000 Troll dolls.

How Did She Get Here? She started collecting them when she was 10 and never stopped. (Perhaps it’s because she’s still playing with toys she liked when she was 10 that she still talks and acts like she’s 10?)

What’s the Grossest Thing We See? In an attempt to manipulate her husband, Dean, into giving up his “man cave” to make more room for her trolls, she offers to do gymnastics wearing her Troll-print string bikini. When he says no, she suggests doing a routine wearing nothing but her adult-size rubber Troll mask. Cut to: Michelle doing sexy pinup poses for the camera, wearing her bikini, with a Troll head.

What Have We Learned? I never thought I’d ever side, on any issue, with a person who has a “man cave,” but here we are.

Who Is This Now? Bobby.

Why Are We Watching Him? He’s sought the help of an expert to cover a terrible tattoo.

How Did He Get Here? He decided to commemorate his friendship with his best buddy James by getting the two of them tattooed on his back, caricatured as animals: James is represented as an ape in a zoot suit, while Bobby’s avatar is a bulldog. Also in a zoot suit. I don’t know.

What’s the Grossest Thing We See? Bobby decides to prove everything Joel Stein just said about millennials true by recording a podcast while getting tattooed.

What Have We Learned? Bobby thinks he’s a lot more interesting than I think he is.

Watch the full episode (Bobby’s segment is the first).

Who Is This Now? Olivia.

Why Are We Watching Her? She’s concerned about the effect some of her past choices may have had on her infant daughter.

How Did She Get Here? During the period when Olivia got pregnant (by accident), she was also drinking and smoking cigarettes and weed. Because her daughter Eden has started seeming kind of sickly, Olivia wonders whether her substance use during the first month of her pregnancy has compromised Eden’s health.

What’s the Grossest Thing We See? The exam by Eden’s pediatrician is made into a montage over portentous minor-key music, accompanied by footage of Olivia’s pastor father, Mark, preaching a sermon that ends, “‘God so loved the world that He gave His only begotten son, that whoever would believe in Him would not perish, but have eternal life.’ In other words, I don’t have to pay the price for my sins: Somebody paid it for me.” The implication of the editing is that EDEN is paying the price for OLIVIA’S sins, by suffering a birth defect or something. And, of course, after the commercial break, we find out that Eden is fine — but the montage has already had its effect by making Olivia seem thoughtless and evil.

What Have We Learned? I was mostly fine with the show over the course of the season (this was the finale), but that montage — and the idea of using an innocent baby as visual shorthand for “Innocence” in contrast to her mother’s “Irresponsibility” — turned me off so much that I really hope it doesn’t get picked up for another season.

Tara Ariano thinks three Troll dolls is too many.

Q&A: Director Tom Berninger on the National's Unconventional Tour Documentary, Mistaken for Strangers, and His Relationship With His Front Man Brother