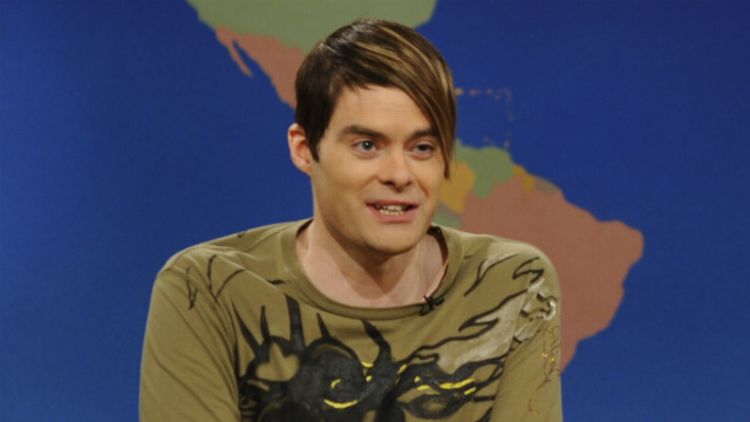 In the words of the legend himself: “It has to happen sometime.” Bill Hader — who, over the last eight years at Saturday Night Live, has quietly put together a body of work that can rival the best to have walked through the doors at Studio 8H — is leaving.

In an interview with the New York Times this morning, Hader announced that this Saturday’s season finale will be his last SNL ever. (Silver lining: Kanye’s the musical guest. Maybe Bill will get an Auto-Tune emo ’Ye rant all to himself?) As the Times explains, “Mr. Hader’s contract at ‘Saturday Night Live’ expired in spring 2012, but he was persuaded to stay on for an additional season. In February, he told Mr. Michaels that he was ready to move on, he said. ‘I’d heard stories that you get very emotional in those conversations,’ he added, ‘and I’ve had other people tell me, “Oh, I cried.” I didn’t, but I did think I was about to faint.'” As for why he’s bouncing: He wants to move to L.A., where his wife, movie director Maggie Carey (The To Do List), works, and where he’s got his own fair share of upcoming movie projects; also, seeing Andy Samberg and Kristen Wiig leave pushed him to do the same. Basically: “It got to a point where I said, ‘Maybe it’s just time to go.'”

SNL is losing some heavyweights this year: Seth Meyers is exiting to do Late Night, and vets Jason Sudeikis and Fred Armisen are always a threat to follow him out the door. Hader says the show’s gonna be fine, though: “There’s a new sensibility happening, and if it isn’t totally apparent on the show yet, I see it on Wednesdays at the table reads … I found myself looking up and watching the new people do their sketches. I like watching Kate McKinnon do something — there’s a joy in seeing a new move from somebody and going, ‘Oh, she can do that.'”

With all the big names from his era heading for the hills, this certainly does feel like the right time for Hader to go. He’s managed to steal scenes in some of your favorite comedies for years now, from Adventureland to Superbad, while still doing the show every week. Now that he’s a free agent, who knows what kind of breakout he might have cooked up. I’m not sure if he’s destined to be a leading man, but he certainly has earned the right to try. Not that I’m happy about it: Hader’s been my favorite for years, winning my heart with Vinny Vedecci, then keeping ownership with Al Pacino building homes for Katrina victims and Alan Alda as Biff. When Stefon happened, I was resistant at first. It kind of felt a tiny bit like your favorite band landing a radio hit, and then getting co-opted by all manner of unseemly strangers. But I gave in eventually, of course. Come on — it’s Stefon.

I couldn’t find Hader’s SNL audition on YouTube, but here’s a good cut from back in the day. It’s Bill being interviewed on Late Night for the first time back in his rookie year. He’s clearly nervous, and a bit awkward when picking up Conan’s anecdote cues. But he’s also hilarious, running through Pacino yelling at his maids (“If I walk into this kitchen and I see a cantaloupe on that table, I will lose my mind”), James Mason trying to use an expired gift certificate for doughnuts (“I’m sorry? Oh, I see. What’s today’s date?”), and Arnold Schwarzenegger playing shirtless chess in the jungle. It’s a nice reminder that Bill Hader was always a killer.

And here’s a clip from his appearance on the B.S. Report last March:

The Best B.S. Video: Will Ferrell's Advice for Rob Riggle