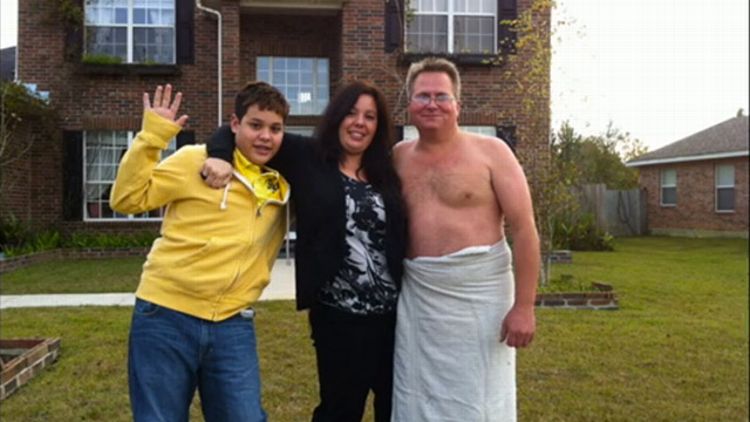 Why Are We Watching Him? He’s being challenged to give up some of his treasured habits, and he’s unhappy about it.

How Did He Get Here? His laissez-faire wife, April, has traded places for two weeks with Yelena, a rigid taskmaster.

What’s the Grossest Thing We See? Tie: Mark letting one of his pet birds chew on his lips, or Mark walking through his neighborhood wearing nothing but a bath towel around his waist — but don’t worry: “There’s no perversion about it. I just enjoy being in a towel.”

What Have We Learned? There are people who would benefit tremendously from having a little rigidity introduced into their lives.

Who Is This Now? John.

Why Are We Watching Him? He’s a veteran “pest control expert” who takes a unique approach to his craft by catching cockroaches with his hands and eating them live.

How Did He Get Here? “I just fancied them.”

What’s the Grossest Thing We See? Two years ago, in order to facilitate his bug-eating (he also eats spiders, flies, and woodlice), Ken had long, sharp canine teeth installed. Between that and his too-black hair (maybe a wig? The footage quality is too poor to tell for sure), he looks like a vampire Roy Orbison.

What Have We Learned? Coffee is “up to 10 percent” bug, so maybe those snobs at Intelligentsia and Stumptown should get over themselves.

Who Is This Now? Beverly.

Why Are We Watching Her? She’s being forced by “The City” (where she lives, in “Western Canada”) to clean up her hoard, because of her neighbors’ 66 complaints during the past four years.

How Did She Get Here? Beverly’s own analogy for what she feels when she buys something is that “it’s the same as getting drunk, or getting high on drugs”: She’s addicted to buying things, and she can’t let anything go.

What’s the Grossest Thing We See? Beverly has several dogs — which, she freely admits, would be taken away from her if anyone from the SPCA could see how they live — and they have taken to voiding their bowels at the top of her stairs (a place, Beverly says, she hasn’t been in a matter of years). At this late stage, the collected feces blanket the floor so completely that the carpet is invisible, and they have been there so long that they are covered in fuzzy mold. When some of the haulers attempt to tackle it, they are so overcome by the odor and … the fact of what they’re dealing with that they give up and apologetically tell Beverly and the organizer they can’t do it. And the grossest thing we see is Beverly’s response: “I thought when they said they couldn’t clean the upstairs, that was totally ridiculous … I’m just going to do it myself, so, it’s, like, no big deal.” OH, YOU ARE? YOU’RE JUST GOING TO CLEAN IT UP YOURSELF? IT’S SO NOT A BIG DEAL THAT YOU HAVEN’T DONE IT IN THE PAST TWO YEARS? SHUT UP, BEVERLY.

What Have We Learned? Constable Kurtis Horner, the police officer who’s been charged with making sure Beverly addresses the neighbors’ complaints and doesn’t end up getting her house condemned, volunteers to help with the cleanup and brings five of his fellow officers to pitch in. Apparently, Canadian cops are way less power-trippy and way kinder than American ones.

Why Are We Watching Her? She’s obsessed with, as she puts it, “rescuing food from Dumpsters.”

How Did She Get Here? She saw a show on TV a while back that documented someone else who ate out of Dumpsters, and thought it was a good idea. Now, everything in her refrigerator is from one of several supermarket Dumpsters she regularly hits.

What’s the Grossest Thing We See? Kelly invites over a number of her female friends for a buffet dinner party and reveals the food’s provenance only after they’ve finished eating. Not cool! (Also, Kelly keeps her salad greens in the freezer, which is disgusting.)

What Have We Learned? Since TV is what gave Kelly this freegan notion in this first place, I guess sometimes — not often, but on occasion — TV may be bad for you.

Who Is This Now? Tara. OK? Her name is Tara.

Why Are We Watching Her? She’s sought the help of an exceptionally talented artist to cover up an ugly tattoo on her forearm.

How Did She Get Here? She had the idea of getting a good cupcake on one forearm and an evil one on the other. A friend offered to do the tattoo for free. Tara got what she paid for.

What’s the Grossest Thing We See? Nothing is worse than Tara’s introduction clip, where she tells us she’s a pin-up and sucks suggestively on a lollipop while the name we share is emblazoned across practically the entire bottom third of the screen.

What Have We Learned? Some Taras are garbage.

Watch the full episode (Tara’s segment starts at about 7:27)

Who Is This Now? Nettie.

Why Are We Watching Her? She’s showing us what life is like with the two pet ducks she keeps in her Chicago apartment.

How Did She Get Here? As a kid, she always liked ducks, so when she had her own place, she determined that it would be legal for her to keep pet ducks in an urban home.

What’s the Grossest Thing We See? Ducks can’t “hold it,” as Nettie puts it, so her ducks, Victor and Ming Mei, must wear these little overall-romper suits at all times, to hold their diapers on. So the ducks look really dumb in their little costumes, and Nettie spends part of her time, as a voting adult, getting hands-on with ducks’ biological waste.

What Have We Learned? I never thought I cared about preserving a duck’s dignity, but I really feel for these poor ducks.

Tara Ariano is obsessed with rescuing toppings from Yogurtland.