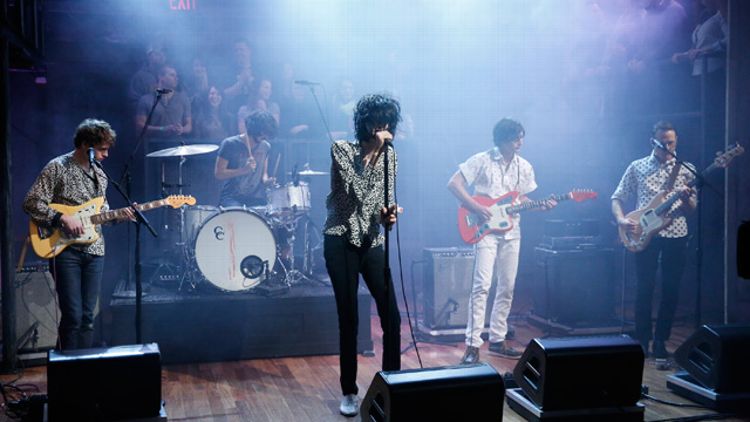 Each weekday, there are a good half-dozen or so music acts performing on late-night talk shows. This means that over the course of a week, there are 30 to 40 artists getting their big breaks on national television who are, for the most part, ignored by all but a small handful of viewers. And, truth be told, the majority of those artists probably should be ignored, in the sense that they haven’t really earned anyone’s attention by doing anything interesting. (I guess this means that late-night talk shows are the “mail by carrier pigeon” of efficient music promotion.) I only bring this up because the one late-night musical performance that got me excited recently was when Deerhunter showed up on Late Night With Jimmy Fallon last month to play the title track from their new album, Monomania. (Apparently the clip is no longer available online, or else I’d post it right here.) It’s been a while since I’ve watched it, but here’s what I remember: Lead singer Bradford Cox is wearing a black wig, a striking black-and-white blouse, and a bloodied bandage on two of his fingers. (He resembles a heroine from an early ’80s Brian De Palma film.) In the closing minutes of the song — during the “mono-mono-mania!” part — Cox walks offstage and through the hallways of 30 Rock. He encounters a crew member, takes a drink from that crew member’s cup, and then waits for an elevator. At some point, the song ends; or maybe the show just cuts to commercial. Anyway, I recall it being excellent rock-and-roll theater. And the song was pretty good, too.

According to a recent Deerhunter profile on Pitchfork, the Fallon appearance would’ve been even more bonkers had Cox gotten his way. (“Initially, Cox wanted to sing to a live rat on camera — ‘like Hamlet’ — but NBC, fearing backlash from animal-rights groups, balked.”) The impression you get of Cox from the Pitchfork story is that he’s a somewhat annoying and unquestionably charismatic self-styled eccentric who’s unsure where his affectations end and his genuine oddness begins. You can also glean as much from listening to Monomania, a record I’ve been playing for weeks in the hopes of figuring out whether I like it or not. (At this moment, I’m going to say “Yes, but with reservations.”)

Coming off of two of the best indie-rock records of the last 10 years, 2008’s Microcastle and 2010’s Halcyon Digest, Monomania seems to have been purposely constructed to back people off a bit. As Deerhunter’s primary songwriter and conceptualist, Cox specializes in synthesizing various strands of record-collector rock — ’60s psych, ’70s glam, ’80s alt, ’90s lo-fi indie — into electrifying guitar-pop that’s precariously positioned between disciplined melody and chaotic noise. Monomania, however, mostly revels in the chaos, which suits the origin of the songs. Originally conceived for Cox’s Atlas Sound solo project, Monomania came out of a period of interpersonal disarray when (as detailed in the Pitchfork article) Cox was house-sitting for Eleanor Friedberger of indie band the Fiery Furnaces, and an undisclosed personal crisis caused him to start drinking heavily with the guys from MGMT. Cox expected to more or less bury the music he wrote and recorded during this time, but his bandmates in Deerhunter liked the songs. Soon after, Monomania was quickly laid down on rudimentary 8-track recorders in early 2013.

Unlike the elegantly recorded and imminently tuneful albums that preceded it, Monomania is turned over to transgressive fuzz, absentee arrangements, lame one-liners, and bad vibes exaggerated for comic effect. It has the trappings of a standard-issue garage-rock record, though there’s also a surprising undertone of blues purism that skirts irony on “Pensacola,” where Cox effects a Southern accent — he’s a Georgia native, but he normally speaks without a twang — about coming “from the Delta / down to the plains” over strangled ’50s rock licks. On the barbed-wire bubblegum banger “Dream Captain,” Cox camps it up with deliciously dumb come-ons — “I’m a boy, man / and you’re a man, man” — that would’ve embarrassed Little Richard. Monomania is only intermittently great, but it’s always fun: If the Cramps had kidnapped and drugged Robert Smith in 1983 in order to sound more like the Cure, it would’ve turned out something like this.

In an interview last month with Buzzfeed, Cox declared an affinity for R.E.M., and suggested the band was a model for Deerhunter. On one hand, this shouldn’t be surprising, considering Cox hails from Athens. On the other hand, I’d never connected Deerhunter with R.E.M. before, though the comparison now makes perfect sense, particularly in light of Monomania, which is essentially Deerhunter’s version of R.E.M. goofy grunge homage Monster. Like Michael Stipe during his “quote-unquote rock star phase” in the mid-’90s, Cox is reconnecting with his punk roots on Monomania, though he can’t completely abandon his talent for hooky songcraft. “Leather Jacket II” and “Back to the Middle” pile on the jagged guitars and disaffected vocals, among other snarling signifiers, but they still come out sounding like reasonably well-behaved pop songs that haven’t quite been given the amount of attention they deserve.

Aside from having their own respective overamped and undercooked “rock” albums, R.E.M. and Deerhunter share similarly skewed perspectives on American roots music. Just as Stipe put his unique ’80s-boho spin on Southern gothic archetypes on records like Fables of the Reconstruction, Cox is trying to remake blues iconography and greasy Bo Diddley swagger in his own weird image. And while Monomania isn’t entirely successful, I appreciate the attempt, given how acting like a pretentious, go-for-broke weirdo now qualifies as news in indie-rock circles.