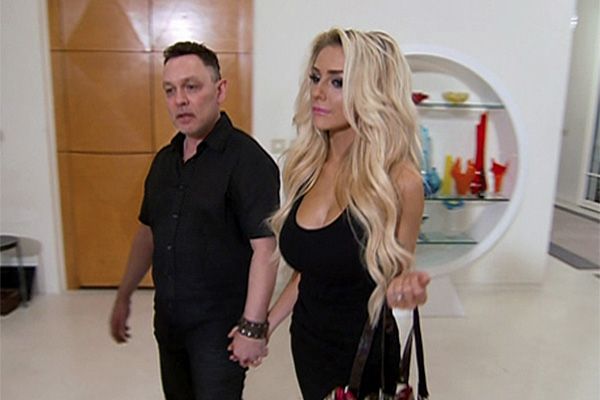 Who Is This Now? Jenn Berman.

Why Are We Watching Her? She’s a therapist leading an inpatient couples’ therapy group.

How Did She Get Here? VH1 probably checked with her during the Couples Therapy development stage to see whether she’d be willing to swear while leading therapy in order to make a point.

What’s the Grossest Thing We See? Maybe you thought that, after last week’s episode ended with her kicking Courtney Stodden (and her husband, Doug) out of the therapy house for her refusal to change her inappropriate wardrobe, Doug and Courtney’s dominance over the therapy process would end? Wrong! Courtney and Doug remain the primary topic of conversation for at least half the episode, even when they aren’t there.

What Have We Learned? The Simpsons line “Whenever Poochie’s not onscreen, all the other characters should be asking, ‘Where’s Poochie?'” really resonated with the Couples Therapy producers.

Who Is This Now? Kirsten.

Why Are We Watching Her? She’s recounting the story of a medical issue that potentially could have killed her.

How Did She Get Here? She starts experiencing flu-like symptoms (particularly gastric distress), which quickly escalate. When she sees blood in the toilet, she seeks medical attention, and is told that her issues are related to hemorrhoids — which, since she’s pregnant, is not unusual. Long story short, that diagnosis is incorrect: Kirsten has, in fact, been stricken by cryptosporidium. It’s a parasite that robs the body of nutrients — and in Kirsten’s case, it’s choking off the food supply to her fetus as well; in anyone whose immune system is compromised, including pregnant women, it can be fatal.

What’s the Grossest Thing We See? Once you know that cryptospiridium lodges in the intestine and causes “massive diarrhea,” the CG-animated version of the parasite appears especially malevolent. And filthy.

What Have We Learned? The parasite is generally caused by the ingestion of fecal matter from contaminated water, soil, or food, so even if you think you wash your hands a lot, wash them more.

Who Is This Now? Jacob.

Why Are We Watching Him? He’s at odds with his parents, Jeff and Joanne, over his unruly behavior and marijuana use; Joanne and Jeff are, by their own admission, counting down the days until he turns 18 and they can kick him out of the house.

How Did He Get Here? Jacob was adopted at age 5 from Kazakhstan; his biological mother exposed him to alcohol during her pregnancy, so that now he his tolerance for alcohol is very low. Based on his speech patterns and mannerisms during filming, Jacob appears to be drunk and/or stoned the whole time.

What’s the Grossest Thing We See? The grossest thing we hear of is an incident in which Jacob pretended to sleep through a request that he walk the dog; when the dog pooped in the house, Jeff scooped up the dog waste and shoved Jacob’s face in it. Called on it, Jeff is unapologetic and says this is a form of discipline he might try again in the future. The grossest thing we actually see is an exercise in which therapist Josh Shipp brings Jacob to Los Angeles’s Skid Row and makes him lie down on a homeless man’s bedroll. Surprise! Now you have bedbugs.

What Have We Learned? Jacob is temporarily scared straight, and the producers send him to a fancy acting camp at which he excels. But once he gets home, he goes right back to sneaking out and smoking weed. So I guess what we’ve learned is that Josh Shipp’s therapeutic techniques are ineffective?

Who Is This Now? Lauren.

Why Are We Watching Her? She’s working up the nerve to go public with her first pregnancy.

What’s the Grossest Thing We See? Though Lauren has a stable job as a hairdresser, she claims she can’t save money to get her own place because … her parents make her pay rent. To reiterate: Lauren is 31 — certainly old enough to gain a general working knowledge of how financial management works, particularly when she’s about to be responsible for the life of an actual helpless infant. I mean, how much could her parents possibly be charging her to live with them? Even the therapist to whom the show’s producers send her tells her, essentially, to grow up.

What Have We Learned? Even Lauren’s mean father, Robert, melts at Lauren’s baby news, so — as usual — the lesson is to spare yourself the stress and not try to keep your pregnancy a secret.

Tara Ariano was happier before she had a visual frame of reference for things that might live in her guts.