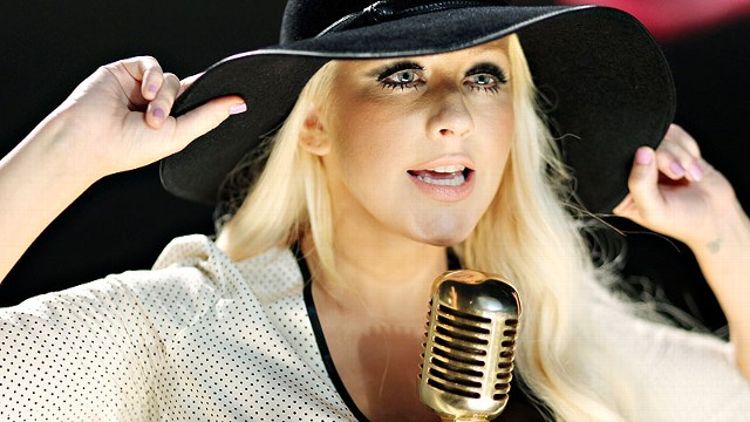 “It’s hard being such a powerful woman in the business. I’m known for not always being warm and fuzzy, because you’ll just get bulldozed over.” — Christina Aguilera

You cannot only sort of listen to Christina Aguilera. You are either inside the Aguileran maelstrom — deep lungs inflating the cartoonish cleavage as a blonde hair-cape whips all around you and melismas rain down like a hail of bullets — or you are not. Christina does not play the background. On Lotus — her first album since 2010’s flop Bionic and the decent-but-far-from-stellar reception to her musical Burlesque — Aguilera strives to reclaim her title as the heavyweight vocal champion in a post-Adele world.

Christina María Aguilera’s divadom did not come about easily, despite her always undeniable pipes. She performed on Star Search in 1991, singing “A Sunday Kind of Love,” and came in second. She survived a high-pressure Mickey Mouse Club childhood and domestic abuse at home. In her post-MMC teens she performed at talent contests on “teen night” at Pittsburgh gay club the Pegasus Lounge. She landed the Mulan theme-song gig based on a demo she made of herself singing Whitney Houston’s “Run to You,” and then parlayed that into a contract with RCA.

From the beginning, she was paced in an unwinnable race against favorite daughter Britney Spears. Christina always exhibited a contrarian attitude toward the satin-upholstered world of teen pop: While Britney and other late-’90s TRL pop starlets whispered coy come-ons in a baby voice, Aguilera’s sexual invitations were much more upfront. She made it known from the time of her “Come On Over Baby (All I Want Is You)” remix that she was not interested in a faux-innocent public image — overtly sexual content got her songs banned from Radio Disney — and her refusal to tone it down continually bit her in her embossed-leather-chaps-wearing ass.

If The Mickey Mouse Club were The Breakfast Club, with Britney as Molly Ringwald’s popular princess, Claire, and Justin Timberlake as the Emilio Estevez jock, then Aguilera is Allison Reynolds, the weirdo played by Ally Sheedy. In her quest for self-acceptance, Aguilera experimented with piercings and name changes (to “Xtina”). For Stripped she recorded “Beautiful” with Linda Perry, which became her signature song.

It sometimes seemed like Christina couldn’t catch a break without being humiliated or compared unfavorably to someone else. Her kiss with Madonna at the 2003 VMAs got cut off in favor of an extended shot of Justin Timberlake’s (less-than-thrilled) reaction to Madonna and Britney’s makeout. Her performance at the 2008 edition led to allegations that she’d ripped off Lady Gaga — allegations Aguilera only heightened by telling reporters she’d never heard of Gaga and then asking whether she was a drag queen. She got divorced, was arrested for public intoxication, forgot to practice the national anthem before the 2011 Super Bowl.

Right when Aguilera’s career was pronounced dead, she revived it to better-than-ever status by signing on to The Voice and playing up her “outspoken bitch” persona. On The Voice she showed an appealing brassy side, flirting with the other judges and giving tough, insightful critiques. Nevertheless, Christina was dogged by mini-scandals. She got her (fake tan?) period while singing “At Last” at Etta James’s funeral. Gossip magazines ragged on her for her fluctuating weight, her supposedly out-of-control drinking, her rivalries with Lady Gaga and Britney Spears, her divorce, perceived bad parenting skills, and the fact that her new boyfriend Matthew Rutler was once her assistant.

Aguilera is often accused of having either too much control of her instrument or not enough. She is called too loud, too robotic, just entirely too much in some way. In interviews she can come across as egotistical and utterly lacking in self-awareness. On the ballad “Sing for Me” she proclaims, “When I open my mouth, my whole heart comes out,” but it’s true that when her mouth is open she occasionally inserts her foot in it. Her feud with fellow Voice judge banter partner Adam Levine took place right on that satisfying reality-television border between fake and real.

Christina also admits that being vulnerable is hard for her, and that her hard shell exists for a reason. She has been open about the prehistoric sexism she encounters in the entertainment industry. Lotus is packed with aggressive songs about fighting back against your “superhatin'” enemies. Despite all the army imagery and the domineeringly sexually confident attitude, Aguilera seems very defensive and almost insecure. She can wail, of course, but it’s the rare softer moments that tease at the Christina we still only sometimes see. “Blank Page,” co-written with Sia Furler and Chris Braide, is one of Lotus‘s strongest moments, showcasing Aguilera at her least “Dirrty” and most raw.

There is no dubstep on Lotus, smartly. There are lots of drums, though — tribal, military, and otherwise. There is fresh-sounding futuristic retro soul (“Make the World Move,” with Cee Lo), big ballads of varying quality, and swaggering Saturday-night anthems to primp in the mirror to. The most obvious mainstream single choice, “Let There Be Love,” sounds like an instant pride anthem without the grody patronizing quality of Katy Perry’s “Firework” or Lady Gaga’s “Born This Way.” The opening “Lotus Intro” produced by Alex da Kid and Dem Jointz made me wish Aguilera would just do a full-on New Age album. “Red Hot Kinda Love” has a light touch and Christina sounding downright playful over a beat by Lucas Secon, the producer best known for his own 1994 single “Lucas With the Lid Off.” “Circles” and “Shut Up” are hostile kiss-offs disguised as catchy buzz-bin singles. “Just a Fool” is a monster-ballad duet with Blake Shelton.

Lotus is not a perfect album, by any means. There is plenty of filler. It’s still more than enough to remind us of Christina’s prodigious vocal talent and to reestablish her credentials as a career artist. Quite a few songs on Lotus have the potential to be huge hits, depending on how hard she promotes it. Even when she missteps, I can’t quit Xtina. It doesn’t matter what she looks like, or who she dates, or how much she drinks, as long as she can sing. It is very different to be a woman in the music industry than to be Blake Shelton or Adam Levine. If anyone can hold her own, it’s Christina Aguilera.