Freak Show & Tell: In Rick and Karissa’s Cheapskate Competition, There Are No Winners 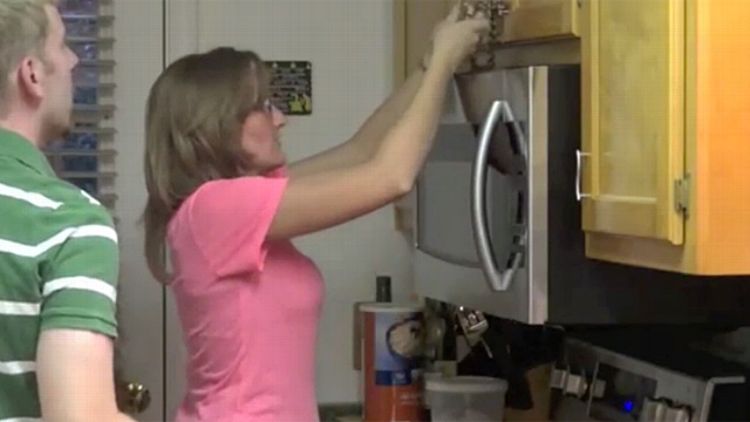 Who Is This Now? Rodney.

Why Are We Watching Him? He’s showing us how he’s preparing his family to survive a catastrophe.

How Did He Get Here? Rodney lives on the waterfront in Ketchikan, Alaska, and wants to be prepared to survive in the event of a massive earthquake that would produce a tsunami.

What’s the Grossest Thing We See? Like most teenagers, Rodney’s daughter Megan is not that interested in prepping, which Rodney well knows. Even so, he forces her to participate in his prepping by cutting a piece of metal to be the base of a steel cylinder, which he plans to fill with supplies and then drop on the ocean floor, where it will be accessible only by scuba diving. Because Megan is not an experienced metalworker — and also because the safety glasses he gives her may not be adequate for the task — she almost immediately gets hit in the eye with a shard of metal. (She ends up being fine, but still.)

What Have We Learned? Rodney may not be a great dad.

Who Is This Now? Rick and Karissa.

Why Are We Watching Them? They are exposing their shocking frugality to the world.

How Did They Get Here? It’s not clear how they started seeing exactly how cheap they could get, but they’ve continued to do it partly because they compete with each other to see who can be cheaper.

What’s the Grossest Thing We See? Planning to save money over the long-term by paying for their funerals now and locking in a price that will stay the same no matter when they die, they present the funeral director with a unique suggestion: Whichever of them dies first will be exhumed when the other dies, so that the second to die can be placed in the original coffin, which they will then rest in forever. Also, whenever they floss their teeth, they both use the same piece of floss.

What Have We Learned? Cheapskates have no regard for hygiene.

Why Are We Watching Him? He’s giving us entrée into the remarkable life of a megachurch pastor.

How Did He Get Here? Preaching is the family business.

What’s the Grossest Thing We See? Bishop McClendon starts the episode poorly by trying to impress the audience with his close friendship with Fonzworth Bentley. (Look him up.) Then every one of the rest of the bishop’s scenes in the episode revolve around how extensive his security detail is, and how even with professional bodyguards, someone still breached the line and got close enough to the bishop to have potentially done him harm. I don’t mean to make light of the fact that the bishop’s life might be in danger from the people who are sending him death threats. But the way he talks about it really reads like bragging about how important he is. It’s also off-putting that the bishop discusses the matter — on camera — with his preteen son.

What Have We Learned? Bishop McClendon is status-conscious in a very weird way.

Who Is This Now? Dale and Jessica.

Why Are We Watching Them? They have hoarded in their home to the point where they’ve been threatened with eviction.

How Did They Get Here? Dale started hoarding when her husband left her years earlier. Jessica, who has had 23 operations over the course of her 21 years, started collecting stuffed animals when she was young as a way of managing her loneliness; the inability to let go of things got worse over time.

What’s the Grossest Thing We See? Dale’s daughter Shirley smells something awful and opens up a freezer to find that it’s either broken or not plugged in: The food inside doesn’t look like it’s frozen at all, and the odor it gives off is foul enough to send everyone who smells it rearing back in alarm and disgust. The head of the professional hauling crew working on the cleanup says they’ll have to empty out all the food before they can move the freezer; one of the new guys on the crew sticks his head too far in and instantly gets sick to his stomach. Multiple times.

What Have We Learned? Stay out of the hauling business.