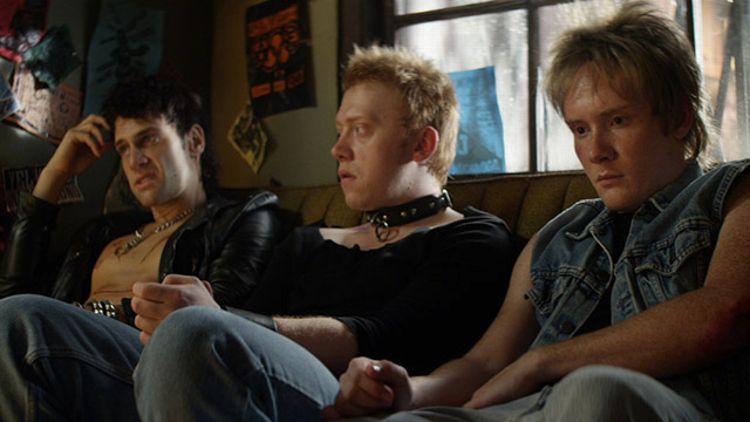 CBGB, a movie about the club that ostensibly birthed American punk, ends with one of those American Graffiti/Animal House epilogue sequences telling you what happened to all the characters. Alongside a picture of the movie’s impostor Ramones is the caption “The Ramones played 74 gigs at CBGB in 1974. The band became so iconic that their music can now be heard in commercials and their CDs can be purchased at Starbucks.” No punch line follows, except the joke that is on you for having watched the entire thing. If you harbored any doubts that punk was, in fact, long dead, perhaps a few spins of “Now I Wanna Sniff Some Pumpkin Spice Lattes” will sort you right out. CBGB tries to capture the magical squalor of the famed Bowery club, but just gives viewers the same trapped feeling that comes from spending too many consecutive hours in a dank cigarette smoke–soaked venue. In the spirit of crap like Empire Records, Factory Girl, and the punk-rock episode of Quincy, M.E., CBGB comes to suck the remaining mystique out of the legendarily cruddy club, which closed down in 2006 and now houses a John Varvatos store.

Alan Rickman plays Hilly Kristal, who founded CBGB in the hopes of attracting country, bluegrass, and blues acts only to find himself accidentally in the center of the burgeoning punk and new wave genres. Kristal is the film’s anchor, and what little story there is revolves around his efforts to keep the club open and up to code. His daughter is played by Twilight’s Ashley Greene, who employs the world’s worst fake Joisey accent while convincing her father to give those crazy kids a chance. The club’s gross bathrooms and rampant cockroaches are alluded to repeatedly but never make that much of an impression, perhaps thankfully. If they really wanted to gross everyone out, they could have made it in Smell-O-Vision.

CBGB tries to act as a travelogue through the club’s early years. After setting up a light story framework, it more or less stays at the club for most of its running time. Bands come through, set up their equipment, and explain who they are to the club and to the audience at home at the same time. The plot, as it exists, is mostly anecdotal and involves Kristal’s eventual management of the Dead Boys. To the young audience for whom the movie seems intended, punk is basically oldies, and rap has long surpassed punk as the genre of choice for disenfranchised teenagers. Not that punk doesn’t still exist, it’s just not necessarily pushing any new boundaries that meaningfully disrupt mainstream culture. The horror that was once reserved for punk shows and the chaos they can engender has transformed into the modern news-media panic over EDM festivals.

Why can it be so hard to depict something cool without making it seem improbably corny and lame? CBGB glamorizes the famously unglamorous club, but trips up on its own empty nostalgia. The flyers look right, the costuming is on point, but there’s something missing from the action. Instead of being vital and electric it only serves to remind you that the young, snotty upstarts depicted onscreen are now the elder statespeople of rock. The music that once seemed rebellious is now part of every teenager’s puberty starter kit, the drugs that went along with it would kill many of the punk scene’s stars, and the fashions that once shocked were quickly codified into uniforms for the same type of conformity they supposedly stood against.

In the absence of authenticity, the movie is sadly short on jokes and camp. Rickman plays Kristal with his usual lock-jawed drawl, and he wrings a little humor out of the material, some of which comes just from the fact that you are listening to Snape describe the appeal of the Ramones.

The movie’s ersatz bands are art-directed to look like the originals, but there’s some kind of uncanny valley that opens up when you see the CBGB simulacra. Malin Akerman, clothed in Debbie Harry finery, mouths the words to “Denis,” and while she may have similarly jagged cheekbones, she captures nothing about Harry’s charismatic beauty or air of contempt. It’s not just Akerman, it’s everybody, and it’s not really their fault. Inverse to CBGB’s quality as a movie is its soundtrack, which wisely opts for original recordings by Television, Talking Heads, Richard Hell & the Voidoids, and Blondie, instead of having actors redo the vocals. As a compilation of the bands CBGB launched, it does a much better job of making the argument for the club’s immortality than the movie itself.

The soundtrack is stocked with a number of Velvet Underground songs and a little bit of side two of Metal Machine Music. Despite his reputation as the don of downtown disenchantment, godfather of the punks, Reed excelled equally at sentimentality. The songs alone can make you cry. Who needs a movie for them? Even while CBGB fails as a cinematic document, the music is the artifact that demonstrates why the club’s legend perseveres. Everyone fantasizes about cool, departed scenes when they are underage and isolated in suburban adolescent discontent. It’s easy to believe you’d fit in and belong in a place like CBGB, or the glam-rock scene of London, or Warhol’s factory, or the Laurel Canyon folk scene, or whatever vibe floats your particular boat, and even more so in a world that allows you to download all the affiliated records and photos at once.

There are lots of great movies about punk rock, and CBGB is not one of them. But it has a few merits, and it’s not the worst choice for a rainy-day On Demand watch. I found that it made me nostalgic for my own early teenagehood, when I first heard many of the records and bands that showed up on the fictional stage or were referenced in its script. I felt possessive of those songs, as if I had some claim to them beyond nostalgia and regular old music appreciation. I imagine everyone feels this way when they fall in love with a great record on first listen. No matter that the albums were already decades old when I heard them, I discovered those bands as if they had been created just for me. CBGB doesn’t capture that feeling, but its soundtrack sure does.

Freak Show & Tell: In Rick and Karissa's Cheapskate Competition, There Are No Winners