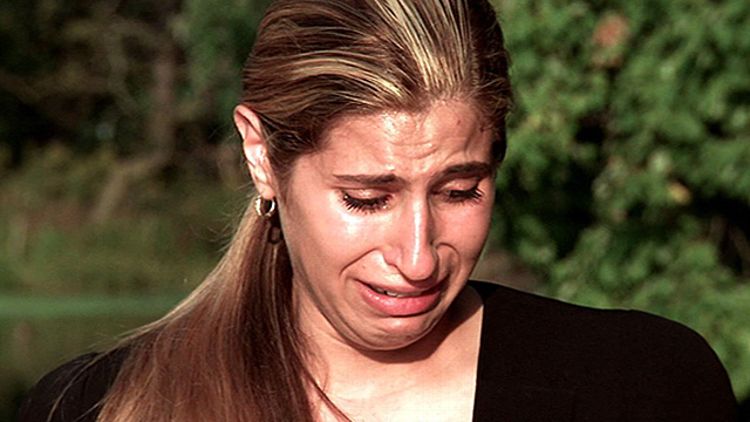 Why Are We Watching Her? She is shaming her “friends” into forgiving her for acting like a ridiculous child.

How Did She Get Here? Her parents spoiled her so much that she’s still, at age 30, a ridiculous child.

What’s the Grossest Thing We See? Most of the setup for her terrible behavior in this episode happened last week, so what we get this week is the payoff: She thinks she’s won the battle of who was more wronged — her, for being accused (fairly) of trying to turn some people in the group against others, or Joey, whom Ashlee was trying to turn into the group outcast and to whom Ashlee hissed, in the midst of their fight, “your [estranged] mother was right about you” — because she wandered away from the group and allegedly hitchhiked to a hospital, where she was treated for a “panic attack” with Benadryl (????). When her friend Chanel suggests that the whole group get together for a tashlikh ceremony, in which they’d each say what they’re grateful for and apologize for things they’ve done wrong, Ashlee agrees only so that she can say to (for instance) Joey that she’s so sorry Joey’s so miserable that she feels the need to mistreat Ashlee. Not an apology, but anyway, at the event, Ashlee waits until everyone else has spoken and then drops the bomb that she had a stroke the year before, so everyone automatically should have been nicer to her when she threw a temper tantrum because her health was in jeopardy even though only one person (Chanel) even knew about the stroke, and she did try to make sure Ashlee didn’t come to any harm, but Ashlee ignored all her calls and texts.

What Have We Learned? Ashlee ends the season proud of herself and how far she’s come, and her dearest wish is that her friends someday achieve her level of enlightenment. So I guess we’ve learned that Ashlee is an example for us all.

Who Is This Now? Miranda.

Why Are We Watching Her? She’s on a zoo play date with all her best frenemies.

How Did She Get Here? Who knows? All these jerks hate each other.

What’s the Grossest Thing We See? At a certain point, Miranda notices that the kids are running out of snacks and leaves a room where the children are getting a chance to interact with snakes. While she’s gone, Emily’s daughter Amzie goes up to Miranda’s son Ledger to try to share the chips he’s eating, to which Ledger responds by smacking Amzie square in the face. When Miranda returns, she not only does nothing to discipline Ledger (as usual), she also makes a point to note that she wasn’t present for the incident because some of the other mothers “failed” to bring enough snacks for their children and she was correcting their error.

What Have We Learned? If this is the way Miranda deals with Ledger’s aggressiveness while he’s still young and impressionable, he will probably not end up the kind of teenager anyone wants their kid to hang out with or, especially, date.

Why Are We Watching Him? He’s working on his relationship with his girlfriend, Abbey Wilson, in an inpatient couples’ therapy situation.

How Did He Get Here? He thinks it’s because Abbey has an eating disorder and he has to take care of her. In actuality, he is — in addition to being a pornographer — an intractable control freak who spends all his time with Abbey bossing her around.

What’s the Grossest Thing We See? After faking with his therapist, Dr. Jenn Berman, like he’d had a breakthrough on the source of his control issues (discussion of abuse in his childhood that doesn’t make it on camera and of which I am therefore somewhat suspicious), he proves that he hasn’t actually revised his bad opinion of Flavor Flav and his girlfriend, Liz Trujillo, picking a fight with them just as Flav is about to announce to his fellow patients that Liz is pregnant. Somehow, this fight segues into whether Flav and Liz stink because they don’t shower, and also features Abbey taking a tray of celebratory chocolate-dipped strawberries from Flav and dumping them into the kitchen sink.

What Have We Learned? Joe Francis has really overstayed his welcome in polite society.

Who Is This Now? Taneema.

Why Are We Watching Her? She’s getting ready for her wedding to her fiancé, Thomas.

How Did She Get Here? Supposedly, it’s because she’s a demanding nightmare of a bride, in conformity to the series mandate, but actually, she’s just kind of loud and has expensive taste, but is practically Princess Kate Middleton compared to the other jerks on this show. THAT SAID …

What’s the Grossest Thing We See? Taneema confides in an interview that her wish to get pregnant is a major motivator behind her wedding to Thomas: “I told Thomas that he’s got two hours to two days to get me pregnant after this wedding, OK? He’s got two hours to two days … I probably wouldn’t be getting married right away if I didn’t want kids. I would wait a little bit longer, but I need some semen in me so I can have some kids, so we’re going to get married.”

What Have We Learned? Taneema’s enthusiasm for understanding the mechanics of human reproduction exceeds that of most reality-show participants I’ve seen.

Afternoon Links: Relive The O.C. Through The Power of Song (and MySpace)