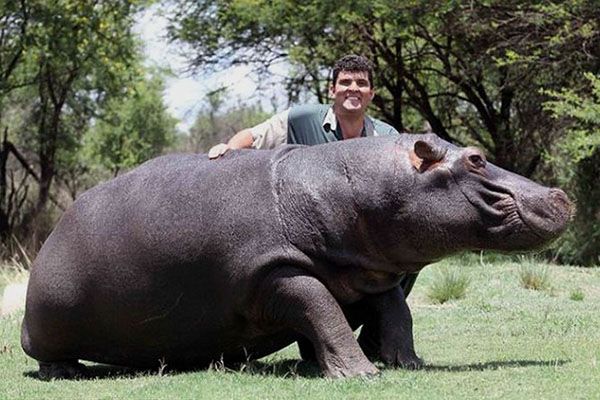 Who Is This Now? Marius.

Why Are We Watching Him? Not to spoil where this is going, but the series title is Fatal Attractions, so … you know, he’s no longer around for us to watch him. Instead, Marius’s loved ones are telling the story of his close friendship with a hippopotamus named Humphrey.

How Did He Get Here? From a very young age, Marius developed close bonds with animals, starting with a horse named Lady on his father’s farm. When Lady had to be put down, Marius took it very hard, and the experience seems to have rewired him to be extremely empathetic toward animals.

What’s the Grossest Thing We See? After Humphrey breaks through a steel fence on Marius’s property and menaces boaters in the nearby Vaal River, Marius becomes something of a local sensation, and starts doing press with Humphrey. The attention starts to go to Marius’s head, and though it’s clear from the archival footage that he does love Humphrey, it’s also clear that when Marius decides to mount Humphrey and ride him into a dam that he’s lost sight of the fact that Humphrey is a 1.2-ton wild animal. Marius refuses to stop his practice of swimming with Humphrey, even after Humphrey attacks Marius’s beloved nephew Johan, skewering Johan’s pelvis in his jaws and nearly killing him; Marius ignores warnings from wildlife conservationists that he must stop doing so, as his life is at risk. It’s not even that Marius is treating Humphrey as though he were a golden retriever; everyone who knew him says that Marius referred to Humphrey as his son. This is just not a scenario that could possibly have ended well. (And it didn’t: Humphrey eventually charged Marius, dragging him into the water, and killing him in front of Johan.)

What Have We Learned? If you need the love of an animal in your life, consider a cat.

Who Is This Now? John and Kelly Taylor.

Why Are We Watching Them? They are showing us the preparations they’re making to survive an apocalypse.

How Did They Get Here? They believe the day is coming — and soon — that the world will suffer a total economic collapse, making currency obsolete, so they’ve moved to a farm in Virginia and started living as though their doomsday scenario has already occurred: They generate enough power from solar panels to sell energy back to their local power company, they grow their own produce, and they’re raising bees so that they’ll be able to barter with honey.

What’s the Grossest Thing We See? Because the Taylors are already permanently living at their “bug-out” location, it is of vital importance that they protect it from potential intruders, and decide the best way to do so is to set up bear traps around the perimeter of their property. I understand that this is for their personal safety; I just wish that when the bear trap was described and demonstrated, Kelly didn’t seem so gleeful at the idea of breaking a looter’s ankle, maybe in half.

What Have We Learned? John doesn’t want us to see their lives as an unending torment of violent paranoia: “It’s a love story.”

Why Are We Watching Him? He’s telling a story of battling nature in his own home.

How Did He Get Here? He rented a house that seemed perfect, only to discover almost immediately that it was riddled with wolf spiders.

What’s the Grossest Thing We See? These spiders are no joke. They’re enormous, and they’re everywhere. Steve gets bitten by one; his housemate finds one crawling on her face when she’s brushing her teeth; and because wolf spiders don’t clean themselves in the same way other spiders do, conventional insecticides — which work when the insects lick the substance off, thereby poisoning themselves — will be ineffective. Steve and his housemates use glue traps, and then some kind of other poison that gets sprayed outside the house, but nothing seems to stop the onslaught. And it’s only after Steve and his housemates have run out of money to get an exterminator back that they discover what’s apparently attracting all the spiders: The attic is full of rat carcasses from a previous rat infestation.

What Have We Learned? Don’t even bother wasting your money trying to fight wolf spiders. Nothing works, and Steve and his housemates finally just give up and move out.

Tara Ariano suspects that even after the apocalypse, honey will not be that big a deal.

Counting Down the Top 10 in ... SOUNDTRACKS!