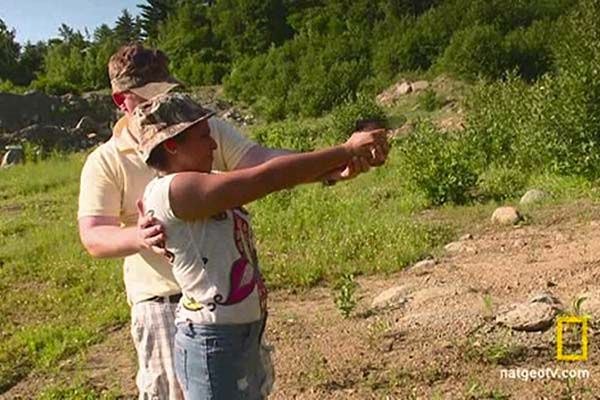 Who Is This Now? Brian.

Why Are We Watching Him? He’s introducing his fiancée, Tatiana, to his unconventional hobby: prepping for the apocalypse.

How Did He Get Here? He believes that he needs to prepare for the chaos and danger that would follow a nuclear war between Iran and Israel that would eventually threaten him, at home in Boston.

What’s the Grossest Thing We See? Though the narrator delicately tells us that Brian and Tatiana met on “a dating website,” one might read between the lines — Tatiana is Colombian; Brian made two visits there to get to know her; Tatiana is making her first-ever trip to the U.S. in order to marry Brian — and surmise that Tatiana might be … a mail-order bride? Regardless: Brian decided not to tell her until she arrived in Boston that he is a prepper, and that he expects her to get onboard — but his prepping has informed his choice of spouse: “I had heard a lot of good things about her culture and the way of life — it’s very simple, there’s a lot of gratitude. A lot of the aspects of prepping already resides within her.” Tatiana — who has left behind a daughter that Brian doesn’t mention; there don’t seem to be any plans for her to emigrate and join her mother, and she certainly isn’t a factor in any of Brian’s preps — seems less certain: “I can’t go outside, I don’t have a job, I don’t have any friends here.” But this kind of isolation is no problem, from Brian’s perspective: “I think Tatiana will be the perfect prepper wife.”

What Have We Learned? Brian is gross.

Who Is This Now? Jude.

How Did She Get Here? After leaving a bad (maybe abusive) marriage, she decided it would be a good idea to start dating her daughter’s friend Kevin, whom she’d known since he was a teenager.

What’s the Grossest Thing We See? I know you’re expecting me to be grossed out by the age difference between Kevin and Jude, but unlike Doug and Courtney of Couples Therapy, neither Jude nor Kevin seems to be in the relationship to get famous via TMZ — plus both parties were of legal age when they started dating. What is gross about Jude and Kevin’s relationship is that they decide to formalize it with some kind of smurfy pagan “handfasting” ceremony conducted by someone identifying herself as “Priestess Moonfire” — that I will not stand for. I’m also not crazy about the chyron — which we see more than once — identifying “Kevin’s Parent’s House.” POSSESSIVE PLURALS TAKE AN APOSTROPHE AFTER THE S, TLC.

What Have We Learned? There is a level of try-hard past Ren Faire buffs.

Who Is This Now? Broderick.

Why Are We Watching Him? He’s a teenager who’s involved his entire family in his couponing obsession.

How Did He Get Here? His mom wants to get a pool, and he’s calculated that if they can get their grocery bill down, they will be able to afford the pool in 14 months.

What’s the Grossest Thing We See? When Broderick declares that he needs 200 coupons for razors and his mother has collected only 198, Broderick makes her and his sisters climb into a recycling Dumpster with him to try to find the two needed coupons in a discarded circular.

What Have We Learned? You’re never too young to be obnoxiously cheap.

Why Are We Watching Him? We’re following his experiences in an inpatient couples counseling course.

How Did He Get Here? When he was 51, he married a 16-year-old girl; now they’re having problems. Go figure.

What’s the Grossest Thing We See? After being pushed by his therapist, Dr. Jenn, to consider his pattern of dating “women who were not yet in some way fully developed,” Doug confidently asserts, “I’ve been with a lot of damaged women, and [his wife] Courtney — for the first time in my life — doesn’t appear to be damaged.” Sure, he seems to be in a position to make an objective judgment on that.

What Have We Learned? Doug might be even more damaged than Courtney.

Who Is This Now? Jeanette.

Why Are We Watching Her? No big deal — she’s just become the first victim to have contracted dengue fever* in more than 65 years.

How Did She Get Here? She went to a wedding in Key West and got bitten by an infected mosquito.

What’s the Grossest Thing We See? It’s enough to hear about Jeanette’s intractable headaches, body aches, and petechial hemorrhaging all over her skin. Adding the detail about her “foul-smelling urine” feels like overkill.

What Have We Learned? Florida has found a new way to be terrible.

Revolution Episode 110, 'Nobody's Fault But Mine': The One-Image Recap