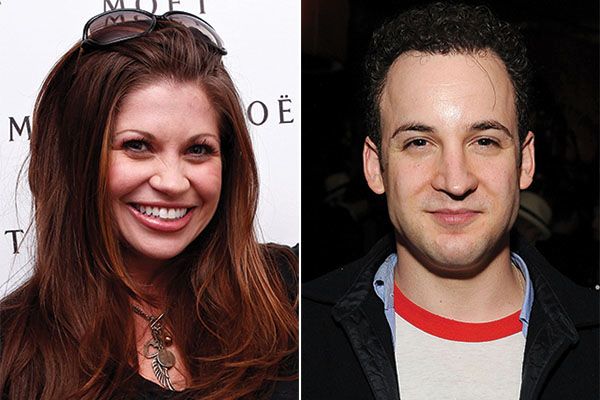 Earlier this month, news broke that there would, in fact, be a Boy Meets World sequel, titled Girl Meets World, surrounding the child of Cory (Ben Savage) and Topanga (Danielle Fishel). Once this was confirmed, the Internet was suddenly filled with rumors, with many, myself included, launching theories about the child and the potential plot, based on hints given during the original show’s run. The most important question, however, wasn’t the plot. It was whether or not the show’s two main stars, Cory and Topanga, would return for the sequel, or if it would simply use the original framework with a new cast. For weeks, silence surrounded the project, and then yesterday:

I’m going to be a father! Well, on TV at least. The “Boy Meets World” sequel is officially happening!

Dreams do come true. Never ever forget that.

While Savage was busy getting his announcement retweeted over 78,000 times, Fishel took to her Tumblr page (one she started just for this announcement) to release a letter (that doubled as a press release) to her fans and those curious about the future of the show. Below, the letter in full, along with my annotations in bold because I can’t control my emotions.

First of all, let me say that you, the fans of Boy Meets World, have been awesome. [Girl, STOP.] That word is often used incorrectly by people, including myself, on a daily basis but you have truly been awe inspiring. You, [Me?] yes, even YOU, [ME?] are the reason that Girl Meets World WILL BE MADE.

I do not know how many BMW cast members will be returning for GMW [GMW just doesn’t work as well as BMW as an acronym, but hey, you can’t win ’em all.], or how often they may appear if and/or when they do appear. I am going to do my best to not speak for others with this open post. But because I have known Michael Jacobs, Ben Savage, Rider Strong [PLAY-UNCLE SHAWN], Will Friedle [REAL UNCLE ERIC], and Bill Daniels [FEEENYYYYY] for 19 years, I know we share many of the same feelings regarding the 7 wonderful years we spent making BMW. Those years were among the most warm, hilarious, insightful, educational years of my life and I wouldn’t trade them for the world. [ME. NEITHER.] Another thing I wouldn’t trade for anything is the integrity and the heart with which BMW was made. [WHERE IS MY KLEENEX.] I promise with the entirety of my heart that we will make GMW with the same honesty, innocence, and intelligence that you learned to expect from BMW.

I say this because making the decision to do the show involved more conversations than you can possible imagine [17]. These conversations were with the same people I mentioned above because they were all instrumental in creating and maintaining the heart of BMW. The first comment out of every person’s mouth was, “Let’s only do it if we think we can create something as special as we did with BMW.” [If everyone said that verbatim, this sequel was meant to be.] When the news leaked that GMW was in the making, literally days after I first heard about the project myself, Michael Jacobs and I had a conversation and we talked about how we were both so blown away by the reactions from all of you. [You’re welcome.] We felt honored. [You’re welcome.] We felt nostalgic. [You’re welcome.] We felt touched by the excitement in your comments, tweets, Tumblr, and Facebook posts. [You forgot 3,000-plus-word rants, but whatever, girl, keep talking.] But most of all, we felt inspired. We felt inspired to bring these characters back to life and to tell you more of their stories. Michael said to me, “Danielle, when I read what people say BMW meant to them it makes me so very proud of all of us. I think it is important for us, for as long as we are fortunate enough to have this opportunity to do GMW, that we all look each other in the eyes every so often and make sure we know we have something of value to offer the audience.” I think we have that with GMW. [Seriously, where is the tissue?]

I say that so that I can say this: GMW is a new show. [Not a sequel?] It isn’t BMW brought back to life but in current day. [Not a sequel.] It will have familiar faces, familiar themes, and familiar messages. [Sequel?] It will also have new faces, new themes, and new messages. [I should find out what “sequel” means.] BMW never spoke down to the audience [Preach.] and we are going to do our best to never do that with GMW. But please keep in mind that this there will be episode 1, of season 1, of a brand new show. We started at the same place with BMW but we evolved and we evolved quickly. For those of you who knew and loved BMW, please allow this show to evolve as well. [Yes, ma’am.] Stick with us. [OK.] Give us a chance. [Yeah yeah yeah, OK, wrap it up, I have re-runs to watch.]

In the meantime, a sincere thank you to every one of you for all of your tweets (I read them all, [Wait …] every day. [SHE KNOWS WHO I AM.] It killed me not to be able to talk about it!), even those of you who asked us not to do it. [WHAT? WHO?] There were only a few of you [I need names.] but I know why you don’t want GMW to happen [Because they’re enemies of the state.] and I appreciate that BMW meant enough to you that you don’t want to see its legacy tarnished. [That’s not why. It’s because they are rooted in evil.] I can assure you, we don’t want that either. Your love, dedication, and appreciation means more to us than you could ever know and it will be the driving force behind our passion to make the best show we can possibly make. Thank you for giving us the chance to do it again. [I love you, Topanga.]

Here’s one of those horrible YouTube tribute videos, this one focused on Cory and Topanga’s relationship, with a guy singing a cover of Katy Perry’s “Teenage Dream.” At this moment, it’s the most beautiful short film that has ever been created.