Freak Show and Tell: Asking the Universe If It’s Cool to Drink This Bottle of Urine 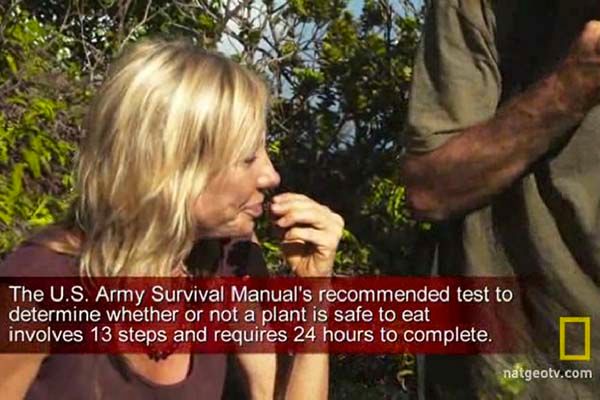 Who Is This Now? David Lakota.

Why Are We Watching Him? He is showing us how he intends to survive if a tsunami should strike Kauai, where he lives.

How Did He Get Here? Knowing that most of Hawaii’s food supply is imported, so that a tsunami destroying the coastline (and airports) would cause mass panic due to supply disruption, he’s testing his ability to live off the land with absolutely no gear. But don’t worry, David will know when a tsunami is coming. “He believes his mystical connections will alert him if a tsunami is poised to strike,” the narrator tells us dryly.

What’s the Grossest Thing We See? Oh, easy: David pees into a bottle and drinks it. The show’s producers can’t, in good conscience, let this pass, and inform us via on-screen chyron that human urine is not actually a good workaround should you find yourself without a ready water supply because it’s full of salts and minerals that are likely to dehydrate you (which we all knew, but I guess this is for the Davids in the viewing audience). But this is just one facet of David’s unique/irresponsible notions of wilderness survival. Producers let it pass, more or less, when David arrives at his bug-out location via kayak and immediately punctures his (bare) foot with an oar. They are restrained when he lays out his strategy for determining whether a wild berry is safe to eat: “I’ll ask the universe, ‘Is it best I eat these berries, yes or no?’ … The body knows — and this is proven science — the body knows exactly what’s going on in the entire rest of the universe, so all you have to do is set up the programming, set up the language ahead of time.” (“The U.S. Army Survival Manual’s recommended test to determine whether or not a plant is safe to eat involves 13 steps and requires 24 hours to complete,” FYI.) But when it comes to the assessment of David’s doomsday preparations, David’s ignorance is addressed in no uncertain terms.

Narrator: “Your assumptions about what water is safe to drink could get you killed.”

David: “Give that water positive thoughts, bless it, clear it, charge it, use intuition, don’t drink it till you know.”

Narrator: “You also need to better study the island’s plant life, or you could poison yourself.”

David: “Unlikely, because same thing. Ask intuition: Is it best to eat this, yes or no? If I don’t ask and I make that mistake, I could die or poison myself or get sick, but you have to make sure to ask every time.”

David goes on to earn the lowest “Prepper Score” (45 out of 100) I have ever seen. When we rejoin him to see how he’s adjusted his prepping in response to his experience on the show — has he bought a pair of shoes, at least? — we see no sign of his girlfriend, Rachaelle, who accompanied him in the initial filming. However, he has now acquired a dog. That poor, poor dog.

What Have We Learned? “There’s no better way to rescue yourself from tsunami or fire or flood or government shutdown than to have the life force as your ally”? This dumb hippie is going to die, probably horribly.

Who Is This Now? Dave.

Why Are We Watching Him? He’s being forced to help clean up his elderly mother’s house, which he’s hoarded so badly that her home and fire insurance have been revoked and she risks eviction if she doesn’t bring it up to code.

How Did He Get Here? It seems as though Dave had some drug problems when he was younger, which led him to leave his wife and children and flee from his home near Boston to California, where he lived on the streets. When he returned, he moved in with Louise, his mother, and started buying things at garage sales, fixing them up, and selling them at flea markets for income. Over time, he accumulated more things than he could reasonably ever find time to refurbish and resell.

What’s the Grossest Thing We See? It’s kind of a greatest-hits of hoarding-show clichés: the very old person (94) living in unsafe conditions; the hoarder’s delusional ideas about what the future may hold for him (Dave, who’s at least in his 60s if not his 70s, thinks his band has “a couple of important dates coming up” and that he could write a platinum-selling song someday); the hoarder’s abuse and aggression when pushed to get rid of his stuff. But somehow, worse than all this … Dave named one of his sons Jorel.

What Have We Learned? A month after the cleanup, Dave still has a house littered with crap and responds to praise on his efforts from his sister Christine by barking at her for pushing him on what he plans to do next. We’ve learned — again — that some people will never change and that trying to help them will only bring their loved ones pain.

Who Is This Now? Margaret.

Why Are We Watching Her? She is addicted to stinging herself with honeybees, something she has done up to 15 times a day for the past 10 years.

How Did She Get Here? “I heard that arthritis can be relieved with honeybee stings.” Oh! You heard. Sure, that’s how most of us make decisions about our well-being.

What’s the Grossest Thing We See? Because the bees each die after stinging Margaret, she feels very guilty about their sacrifice, which I guess is why we see her squatting in her backyard, serenading her hives with a number on her flute, and then sobbing. Also, this is how Margaret responds to her husband J.D.’s request that she consult a physician about her habit: “After I’ve had at least 10 stings, the sex is great.” “That’s true,” says J.D. (What?)

What Have We Learned? People are more willing to believe in crazy folk-medicine cures than a reasonable person could possibly imagine.

Who Is This Now? The Clarkstons.

Why Are We Watching Them? They’ve sought the expert intervention of child-care expert Deborah Tillman for help with their unruly home life.

What’s the Grossest Thing We See? Mother Aleashia defends her and her husband Patrick’s practice of using corporal punishment on their children (with their hands or, at least once that we see, with a belt) by saying, “We are Christians, and so we do believe in whipping our children.” When she does it, Aleashia makes the kids tell her, “Thank you for whipping me, because you are telling me that you love me,” and she has indoctrinated the belief in them that parents who don’t physically punish their children don’t love them. All of that is, of course, terrible. But when Deborah, after observation, sits down with Aleashia and Patrick and tells them that they can’t hit their kids anymore, and Patrick responds that his mother “whipped” him and that it made him a better person, Deborah’s only reply is that he can’t hit his kids the way his mother hit him because his kids’ “lives are different.” What does that even mean? How about Patrick can’t hit his kids because it’s wrong?

What Have We Learned? SEVEN CHILDREN IS TOO MANY CHILDREN.

Who Is This Now? Ron Holiday.

Why Are We Watching Him? He’s telling the story of the loss of his wife Joy and their friend Chuck.

How Did He Get Here? Ron and Joy were dancers who incorporated big cats into their routines to inject some excitement and danger into their act.

What’s the Grossest Thing We See? Joy and Chuck were both killed after (separately) startling Jupiter, a white tiger in the Holidays’ menagerie, but obviously their injuries weren’t captured on film at the time. However, we do see an actual shot of the puncture wound that Ron, years before Chuck’s and Joy’s deaths, sustained while keeping one of the cats from lunging at an audience member; the injury put Ron into a coma for “several weeks” and was severe enough that doctors thought they might have to amputate his arm. (The dark brown Justin Bieber wig that Ron wears, despite the fact that he’s at least in his 70s, is also pretty hard on the eyes.)

What Have We Learned? Given that the documentary Cat Dancers already existed, this additional profile of Ron was extremely unnecessary.

Tara Ariano asked the universe whether it was a good idea to watch these shows. The universe said no, she did it anyway, and now she has dysentery.