Frank Darabont’s ‘Mob City’ Is Canceled. Can He Get Back to Making Stephen King Movies Now? 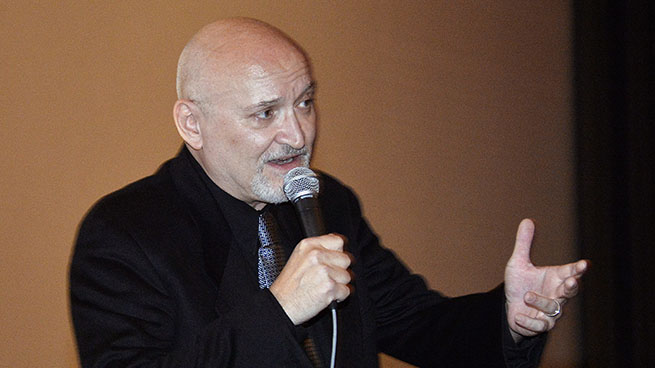 Three-time Academy Award nominee Frank Darabont has not had good luck making television. Last night, TNT announced it won’t renew the 1940s gangster series Mob City, setting Darabont back to 0-2 in the last few years. The first and only season was presented in three slick, ultimately uninspiring two-hour episodes in December. The network is “incredibly proud” of the “remarkable drama” that was Mob City, but a viewership of about two million didn’t justify any more remarkable incredibleness. TNT is still “eager to work with Frank Darabont again,” though.

The question is, should Darabont be eager to work with anyone on TV again? He was the original showrunner for The Walking Dead’s six-episode first season and a major creative force in bringing Robert Kirkman’s graphic novel to AMC. And then he got fired. Promoting Mob City at the end of 2013, Darabont finally started talking about being ousted from TWD just before the second season propelled the show to its current level of world domination: “There’s a deep commitment and emotional investment that happens when you create something that is very near and dear to you, and when that is torn asunder by sociopaths who don’t give a shit about your feelings or the feelings of your cast and crew because they have their own reasons to screw everybody, that doesn’t feel good,” Darabont told Variety.

Darabont seems to thrive, as any writer/director would, with as much creative control and as little meddling from the studio as possible. He also has a definitive knack for adapting the often mishandled works of Stephen King. But it’s been 15 long years since The Green Mile and 20 since The Shawshank Redemption. Darabont directed both from screenplays he adapted, and has those two projects to thank for his Oscar noms. He also pulled double duty on 2007’s The Mist, which, depending whom you ask, either isn’t as good as Shawshank and The Green Mile or just isn’t very good, period. Only one of Darabont’s four films, the Jim Carrey–starring The Majestic, doesn’t come from Uncle Stevie’s Orchard; Darabont didn’t write that screenplay, either.

Combine all that with the fact that Stephen King adaptations are still popping up once or twice a month and getting harder and harder to get excited about, and we’ve got a playing field that calls specifically for Frank Darabont, Movie Director. Just to get the juices flowing, I’ll throw out a few stories ripe for Frank’s picking:

Blaze: Published as a “found” Richard Bachman novel in 2007, it bears more than a little resemblance to Of Mice and Men and operates in a dusty world similar to that of The Green Mile.

11/22/63: There’s been word about J.J. Abrams adapting it for TV — after Jonathan Demme abandoned a big-screen version — but a time-traveling JFK assassination prevention plot shouldn’t be much of a stretch for Darabont.

1922: Again: old-timey = Darabont. This novella from Full Dark, No Stars is a little thin to build into a full film, but I would’ve said the same for The Mist. There’s gotta be a way to pad it out. The story — farmer in titular year “tupps” wife’s dead body down a well; gets haunted alongside his son — is freaky and atmospheric.

The Long Walk: This has been discussed as a possibility as recently as 2008. Darabont said it would be “more low budget and stylistically similar to The Mist,” but also that it would show up within five years, so who knows what’s happening.

Duma Key: No one’s lined up to adapt this solid supernatural novel from 2008 yet. Darabont would get to film in the Florida Keys and make his second horror-tinted King product in the process.

The Stand: First Ben Affleck was attached to direct Warner Bros.’ new adaptation of King’s finest novel, then Scott Cooper (Out of the Furnace, Crazy Heart) was, and now no one is. If Darabont’s attraction to television has been an eye toward a longer commitment, this could be the ticket: The Stand has been discussed as a trilogy, and even if it’s not, it’s gonna be long.

'The Bachelor' Week 6: Lessons From a Weirdly Sexual Trip to the Shire

Breaking Up Is Easy to Do, With Hollywood Movie Titles!