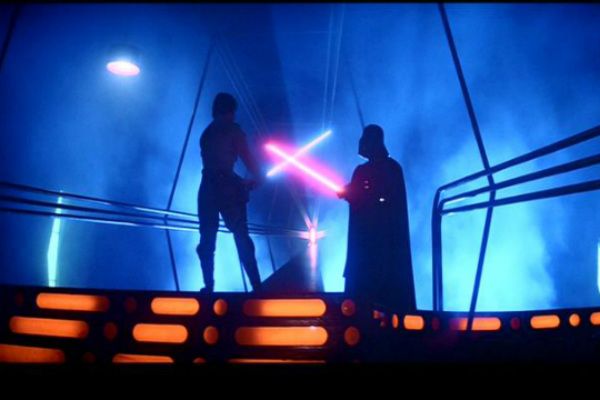 In the 16 years between Return of the Jedi (1983) and Phantom Menace (1999), George Lucas focused a lot of his attention on the development of Industrial Light & Magic, his effects company, but never lost sight of his primary cash cow: the Star Wars franchise. As an evil wizard, he understood that with Star Wars video games, books, theme park rides, and tons of merchandise, stoking the “prequel” rumor fire was his best chance to stay relevant and in the black with the ever-growing geek culture. And with no film to take credit for, it was in these intervening years that Lucas took a more public role and much stronger hold over the Star Wars universe. There was nary a time when anything produced about or around Star Wars — retrospectives, behind-the-scenes featurettes, — didn’t in some way shoehorn in Mr. Lucas, even if his involvement was nominal. And even when he wasn’t on-screen, his power still reigned supreme, evident in the seemingly rehearsed platitudes his cronies would use when interviewed.

It’s why these all-too-brief 15 minutes from an old Dutch behind-the-scenes TV documentary about the making of The Empire Strikes Back, found and published by Open Culture yesterday (and brought to our attention by Slashfilm), are so refreshing. There’s no George. His name isn’t even mentioned. Instead, Empire is presented as a vast collaboration by a bunch of hard-working movie folks. Empire director Irvin Kershner speaks with an eloquent, authoritative voice about his intentions and vision for the film. Producer Gary Kurtz is soft-spoken and doesn’t appear to have a shred of ego in him as he talks about the enormity of Empire’s production.

8:00 in Video 1: This is exactly how I’ve always envisioned stop-motion animators, sounding like they just woke up from a nap, and with a big, half-empty bag of Funyuns and a bong just off camera.

9:20 in Video 1: I like these crude, early versions of Yoda. But I particularly like how this puppet maker is credited as Frank Oz. When he’s clearly not.

1:09 in Video 2: Seeing the painstaking, old-school method of artistically removing matte lines and wires from shots by hand. That has to be the modern-day equivalent of an entry-level production job where wide-eyed, fresh-out-of-film-school students get the gumption sucked out of them because they’re doing overnights loading hours of The Real Housewives of Atlanta B-roll into a computer.

2:03 in Video 2: Love these matte paintings and the guys who created them. The biggest loss in all the releases of these films is the removal of the hand-painted mattes for digitally rendered backgrounds. Too much “real” is not always a good thing. Sometimes it’s nice to be reminded that regardless of how immersed you are, you’re still only watching a film.

RZA's Totally Reasonable Stipulations for a Proper Wu-Tang Comeback Album: Everybody Do What I Say