Cast a Spell: The Return of Fleetwood Mac to the Forum, and Marjorie Cameron at MOCA 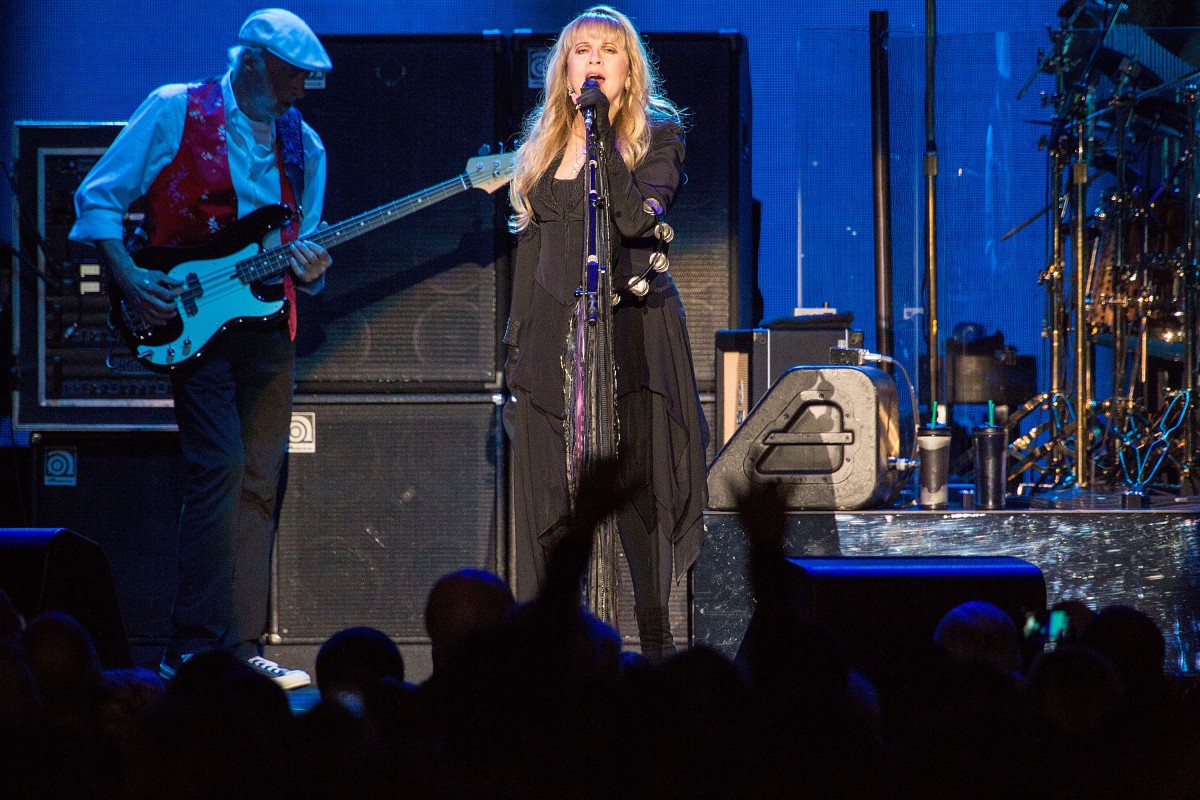 Built in 1967, the Forum in Inglewood, near Los Angeles, was once a top-of-the-line indoor arena that housed the Lakers and Kings and hosted sold-out shows for acts like Led Zeppelin,1 Elvis Presley, the Jackson 5, Bruce Springsteen, and Prince. As a famous venue, the Forum peaked with arena rock, and like arena rock the Roman Coliseum–themed building was considered something of a dinosaur by the early ’90s. When Staples Center opened in 1999, it took the Lakers and Kings with it, leaving nary a Clipper. With crowds flocking to Staples and other sites for big concerts, the Forum was quietly sold to a local church that leased it out for events and occasionally held services there.

Two years ago, the Madison Square Garden Company bought the Forum for $23.5 million, renovating the ancient circle of stones into a high-end venue. At the start of 2014, the Eagles, who in 1976 sold out three consecutive nights at the Forum, played the first six dates. A giant sculptural copy of Hotel California was placed on top of the building’s round roof, and the outer façade of the venue was repainted its original shade of Roman red. On Saturday, the supreme ’70s Los Angeles rock gladiators Fleetwood Mac returned to the stage with their “original” lineup2 of Stevie Nicks, Lindsey Buckingham, Mick Fleetwood, John McVie, and Christine McVie; Christine was returning for the first time in 16 years.

It was fantastic. The rehabilitated Forum has a strict no-smoking policy, so the show was curiously absent of the familiar pot smoke and patchouli smell, leaving only a gossamer fog of nostalgia cloaking the audience, but the show was its own drug. Christine’s reintroduction into the band was emotional, magical, and chemical. As the band hit the harmonies in opener “The Chain,” a chill went up my spine. I’m a Scully, but there was something deeply mystical about it. The sound of Fleetwood Mac’s voices and instruments blending together so beautifully briefly stopped time, as all the days and years and decades meshed together into one shining eternal moment: “Listen to the wind blow, watch the sun rise.” Any fears that the reality would not match the memory melted away as the band’s greatness prevailed. Talented individually, as a band the members offer an embarrassment of riches. Lindsey Buckingham shreds for his life. Mick Fleetwood and John McVie provide the elemental drum and bass that have always been the band’s backbone. Christine McVie is impossibly cool, tan, and blonde, like a Malibu surfer. She stands behind her keyboard pulpit to deliver righteous sermons like “Everywhere” and “Say You Love Me.” I kept thinking about Taylor Swift’s recent admission that she doesn’t have any older female heroes in rock as I watched the 71-year-old Christine McVie, clad in a black leather jacket and tight jeans, slay everything in sight with her awesomeness. Someone take Taylor to a Fleetwood Mac show, please.

Everyone in the band is in at least their late sixties. It’s probably just because I’m getting older, too, but watching them kill it for an all-ages audience was deeply inspiring, the antidote to the culturally enforced narrative that aging is a downward slope wherein you lose all your powers. (I watched the Robert Altman documentary Altman recently as well, and garnered a similar optimistic feeling from it.) What if you actually just keep improving (or at least staying great) forever? It’s still such a radical notion, particularly in youth-centric Los Angeles. It also feels radically utopian to see this group of people, made up of two (and a half?) former couples, cooperating and working together. It resonates with a hippie idealism that speaks to me: men and women who love and care about one another, an alternative family that happens to be one of the world’s greatest bands — women traversing outside the prescribed social roles of mother and wife to pursue other paths and finding personal fulfillment there. Watching Fleetwood Mac play, tears in my eyes most of the time, this valley girl had a miniature spiritual revelation of a distinctly “Me Generation” sort.3 Maybe getting older will be COOL.

Stevie Nicks is, of course, completely and utterly Stevie Nicks. She warbles beautifully and rambles slightly when she talks about how believing in your dreams will make them come true. She is wonderful, gorgeous, charismatic, and witchy. She changes fringed shawls between songs. She cannot hit all the high notes anymore, but it doesn’t matter. Live performances shouldn’t sound exactly like the record anyway, and listening to the choices Nicks makes to accommodate her current vocal range is fascinating and instructive. Stevie and Lindsey still have that old black magic, although it’s less evident in their theatrical onstage hand-holding than in their singing voices, conversing in counterpoint, sometimes merging together in passion. Stevie twirled just enough, and she really saved her all for “Gold Dust Woman,” digging her claws into the song as if she hadn’t done it 26 times on this tour already, and thousands of times in her life. While for most of the show Stevie felt like your lovably kooky new-age-leaning aunt who’s into crystals, during “Gold Dust Woman” she transformed, serving the supernatural-level charisma that once led to rumors that she was a practicing witch. While Nicks has always denied that she had any interest in the occult beyond, say, tarot cards, after “Rhiannon” her public portrayal was as a powerful sorceress. Nicks’s fans felt she was a witch in the positive sense: a powerful woman with the ability to manifest her intentions through sheer will. Wary at first of the label and its associations with the dark arts (she eschewed wearing black for a while), she came to embrace it. She’s always clearly been a good witch (which is why Ryan Murphy cast her as one on AHS: Coven).

Stevie was still on my mind the next day when I went to the MOCA show “Cameron: Songs for the Witch Woman,” the first survey of work by the Los Angeles artist Marjorie Cameron, a key figure in L.A.’s postwar art scene. Cameron’s art is as beguiling as her backstory. She belonged to a group of Angelenos whose extracurriculars make Fleetwood Mac’s ’70s coke binges look downright tame in comparison. Cameron was an Iowa-born woman who joined the WAVES and was promoted quickly to draw military maps for the joint chiefs of staff and sew costumes for U.S. propaganda films, before becoming a disenchanted conscientious objector and dropping out. Cameron moved to Pasadena and entered into a love affair as fated and doomed as Stevie and Lindsey’s: She married Jet Propulsion Labs cofounder Jack Parsons, a rocket engineer who practiced Thelema — the occult religious movement founded by Aleister Crowley. Although skeptical at first, Cameron eventually began to regard herself as the “Elemental woman” Parsons believed her to be. He confessed that he and future Scientology founder Lafayette Ron Hubbard had summoned Cameron in a sex magick ritual called “the Babalon Working,” meant to attract a worthy partner for Parsons. When the striking, strange, flame-haired Cameron walked into the Agape Lodge — the Pasadena-based OTO branch lorded over by Parsons at Crowley’s command, Parsons believed she was the living incarnation of the Thelemite goddess named Babalon.

Cameron’s artwork and persona is dark, gothic, kinetic, sometimes romantic, and an obvious precursor to Stevie’s. Cameron’s eerie illustrations look like Aubrey Beardsley on acid. When soul mate Parsons died while constructing explosives for a film studio, Cameron destroyed most of her artwork and moved to the desert. She then moved through the L.A. artists’ communities of Venice Beach and Topanga Canyon, meeting and influencing movers and shakers in the emerging Beat scene. She played the “Scarlet Woman” in Kenneth Anger’s Inauguration of the Pleasure Dome and the “Water Witch” in Curtis Harrington’s Night Tide alongside a young Dennis Hopper. She exchanged letters with Joseph Campbell. She had a drawing displayed at L.A.’s ultra-hip Ferus Gallery in 1957 that got the show shut down by the LAPD for being obscene. Called “Peyote Vision,” the image depicts a woman on all fours, her snake-like tongue flicked out in ecstasy, as a demonic figure rails her from behind. Cameron’s otherworldly aura and fringed, diaphanous clothes are the blueprint that legions of Los Angeles witchy women have followed since. Encountering Cameron’s work for the first time was like encountering Stevie’s. You mean you are allowed to be that powerful and cool? You can live your life as an adventure whose hero is you, like male artists?

Just as Cameron did, Nicks has served as an inspirational figure to younger generations of artists, a den hen with a strong protective instinct for all the people she cares about. Women like Cameron and Nicks make a strong case for the importance of witches in our culture — village elders with knowledge to impart, female artists whose very existence becomes a sort of life map you can look to as inspiration for your own. When you discover artists of the past like Marjorie Cameron, Mina Loy, Julia Margaret Cameron, or Louise Bourgeois, women who insisted on going their own way, it suddenly feels like there’s a golden thread that runs through everything. Nicks may not cast proper spells, but when she incants “time cast a spell on you, but you won’t forget me,” everyone shivers with recognition. It’s enough to make even the fiercest skeptic believe that sometimes crystal visions are real.

‘The Walking Dead’: A Remarkable Resurrection, an Underwhelming Midseason Finale