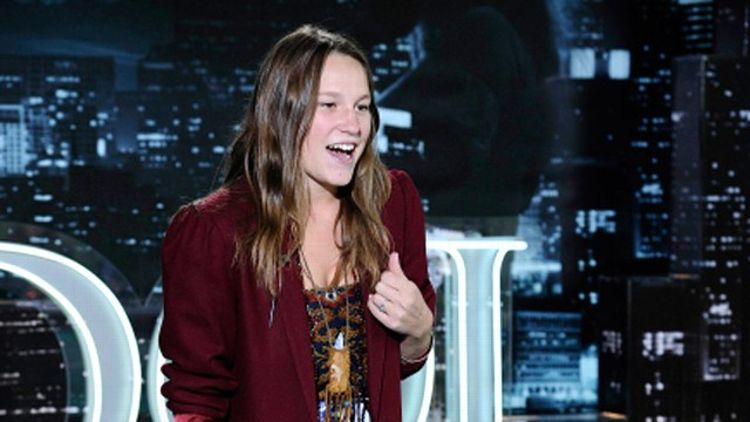 All season, Grantland editors Jay Caspian Kang and Mark Lisanti will answer five very important questions about each performance episode. They’re already starting to crack under the pressure, so by the top 12 things should really get interesting.

Who was your favorite contestant from Aspen? (And keep in mind by “favorite” we mean “the one you liked the most, you feel me, don’t overthink it, dawg.”)

Lisanti: I’m going to go with the leadoff position and choose Jenni Schick, the music teacher in the go-go boots. She can sing (Benatar, always a crowd pleaser); she and her boyfriend have a pretty fun, super-bicurious celebrity hall-pass list (the extreme overlap of which definitely makes it seem like they were just using Idol to trawl for an all-star three-way, and how can you not be down with that, terrible choices nothwithstanding?); and Kiefer Sutherland is crying at his wife’s graveside on my television right now as I weep with the convulsive force of a 13-year-old girl at a Bieber fragrance launch event. Where was I? Oh yeah, Jenni Schick. As an aside: Are these contestants in their late teens/early 20s ACTUALLY sexually attracted to Steven Tyler? Isn’t he just the leathery, scarf-twirling, middle-aged female art teacher from their grade school? Do they know any Aerosmith that didn’t involve Alicia Silverstone? I refuse to believe any of them are sincere, and the cynicism of their flirtation alternately sickens and turns me on so, so much.

Holy shit, Danny Glover’s also on this Touch show! You go, I made my choice.

Kang: Really? Jenni Schick? In the parlance of a Twitter troll: “Ur a fucking idiot. The fact you like Schick invalidates everything you’ve ever said. (1/2)” “I will hock a banana slug’s worth of Skoal Straight into a Diet Mountain Dew and pour it on yr MacBook. (2/2)”

My favorite contestant of last night is also my favorite contestant of the season to date. As I stated in our preview piece, my ideal Idol has messed-up teeth, comes at the competition from an outsider angle (read: NOT A PUBESCENT CASTRATO SINGING MACHINE RAISED BY A BATSHIT-CRAZY STAGE MOM/DAD [PCSMRBABCSMD]), has hippie tendencies and can sing down big soul songs. Haley delivered on every single one of the promises and even brought out a slight Laura Nyro vibe in her voice. (Does mentioning Laura Nyro bump up my cred with people who use the word “excavation” when describing their music consumption habits?) I liked her, I liked her boyfriend, I liked her genuine bashfulness, I liked how she didn’t try to put her tongue in Steven Tyler’s ashtray of a mouth. Hollywood Week will eat her up, she will get spat out somewhere in the semifinals, she will end up dancing on the side of the road in a Statue of Liberty costume during tax season, but me and my Haley McGee will always have Aspen.

She even sang “Tell Me Something Good,” which was one of my “Five Songs You Should Never Sing on Idol.” I’m sticking by that proclamation — Haley would’ve been better off singing something like “Do Right Woman,” but the fact that a 19-year-old girl with not much singing background could make me rethink a hard-and-fast Idol rule is testament to her potential.

Who was your least favorite of the contenders who advanced to Hollywood? And by “least favorite,” enough, we know what it means, just go fill up the Haterade jug.

Kang: Jenni Schick! She was too moany, too voice-coachy. Please, America, learn the lesson of Melinda Dolittle and the gospel of Danny Gokey — if someone is either a professional backup singer or a music teacher, there’s a reason why they’re not singing in stadiums. And it’s not because they’re too shy or because they hadn’t found Jesus or because someone in their lives doubted them. It’s because they showed up for their Idol audition dressed like a 13-year-old at a soccer team slumber party and then whored themselves out to Steven Tyler. The fact that you fell for her brings your judgment severely into question. What’s next for Hollywood Prospectus? Are you going to hire Caitlin Flanagan to write recaps of Desperate Housewives?

Lisanti: Nice New York Media Elite slam at the end there, bro. Excavation, indeed. Shoot me in the face for falling for Jenni’s ebullience, her above-average voice (she’s doomed, incidentally; the tweens are going to eat her face for breakfast once we reach the Text Off the Threatening Hotties round), her get-to-Hollywood-at-all-costs osculatory bribery of the most manipulable judge. I’m going to enjoy her while we still have her and brush off the ad hominem attacks from the deranged hippie-lover.

This is the part where we should probably mention Angie Zeiderman. Will she be the most divisive contestant since Siobhan Magnus? Once she stopped rolling around on the floor like she was possessed by the annoying ghost of a Cats understudy suicide consigned to an eternity of failed auditions, she had a good voice. But by then it was probably too late; the show tunes, the overt Gaga worship … things could get messy in Hollywood Week when we’re forced to suffer through the annual “Why can’t I find a group to take me?” crouched-in-the-corner-of-the-ballroom crying jag.

Haley Smith, aka “Cabin Girl” from this point forward, is a hippie. (A) Is she the next Bowersox, in the best Bowersoxian tradition, and (B) which of the judges’ incessant, weakly coded references to her hippiedom (no doubt brought on by an overpowering wave of patchouli filling the room) was the best?

Lisanti: This is going to come as a shock to you, but I’m not into hippies. Sure, maybe she shows up with a battered, teddy-bear-sticker-encrusted acoustic guitar and no shoes in Hollywood Week, then they make her the next Bowersox, why not? She seems sweet and has a nice voice. And though I enjoyed Tyler’s “You’re right out of my era” and Randy’s “a real flower child” with “uniqueness,” I think J-Lo’s dainty, insincerely concerned “You’re tripping balls, aren’t you, sweetie?” was the cream of the hippie-baiting crop.

Kang: She’s not the Nowersox — the Original Queen B was a polished performer by the time she got on Idol and already had a huge arsenal of songs. Haley’s a bit more raw. But, in some ways, she’s got more potential than Bowersox, who, at her best, was not much more than the best subway busker you’ve ever seen. (And this is coming from someone who ranks Bowersox as one of his three favorite contestants of all time.) She should stick to the Laura Nyro and the LaBelles formula and update soul songs. If she can bang out a good versions of “Bridge Over Troubled Water” (Aretha version), “Bring It on Home to Me” (high level of difficulty), and “Son of a Preacher Man,” she might be able to squeeze her way into the top six.

Has “Can you sing us another song, honey?” become the ultimate passive-aggressive weapon the judges turn on one another to break up the genital-turtling monotony of, and we paraphrase Steven Tyler here, listening to six fucking hours of the same Adele tune?

Kang: Are we watching different shows, Lisanti? No, not at all. The ultimate passive-aggressive move is to ask the girls if they have a crush on Steven Tyler, knowing they can’t say no. Then they say, “Do you want to touch a man whose skin looks like the inside of a vacuum bag?” To which, of course, the girls have to say, “Yes.” Then they say, “Would you like to kiss Steven Tyler?” Everything after that qualifies as face rape.

Lisanti: I can’t help finding the little games the judges play with one another an oasis of entertainment in the endless slog of cattle-call shows. Those games are happening here, too. See how quickly you’ve turned on me? Oh, by the way, Steven Tyler is dropping by the office this afternoon, and I let it slip that you slow-dance solo to “Crazy” in the bathroom stall every day at 3 p.m. He’s very excited to invade your face.

Young, prodigiously talented Jairon Jackson, who boldly came in with his own song and murdered, had some pretty good R. Kelly pipes on him. What would Chapters 18-21 of his Trapped in the Closet look like?

Lisanti: Young Jairon returns home from a long, exhausting day of hosting at Applebee’s to discover his girlfriend, Rosie [portrayed by Rihanna], nervously trying to stuff something into the hamper before he can see it. She tries to distract him with a kiss, but he brushes her inside and discovers a tiny pair of silk boxer shorts in the hamper. “I say ba-by! I say ba-by! Whatarethesedoinginmylaundry, ba-by!” he sings, anguished. “I work hard, so hard, at the Ap-ple-bee’s to keep you happy, ba-by!” Jairon’s voice, lip-synched by Rosie, responds, “But ba-by! You’re just a boy, ba-by! I need a man, ba-by!” Then her tiny lover [portrayed by Peter Dinklage] pops out of the hamper, shoots Jairon in the stomach with a derringer, and there’s a lot more singing about betrayal, bleeding, and dying. Also Ryan Seacrest is grooming a zebra in the bathroom.

Kang: I refuse to answer this question on grounds of defamation of the good name of Robert Kelly. Nobody has R. Kelly pipes.

Jay Caspian Kang used to be a premium content farmer. Now he sits in Starbucks and cries whenever the Cowboy Junkies come on the radio.

Mark Lisanti is slowly working through his hippie issues.