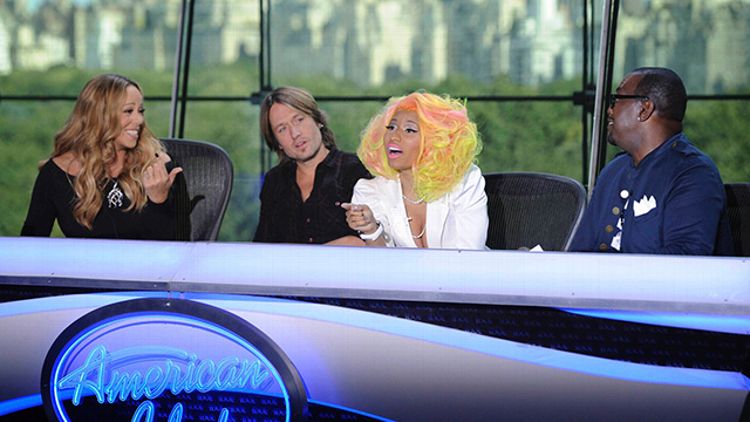 Whatever doesn’t deafen you makes you stronger: Grantland’s Jay Caspian Kang, Mark Lisanti, and Emily Yoshida have returned, bowed but not broken by The X Factor, to tackle another season of American Idol. Yes, it’s definitely time to start worrying about them.

What are your first impressions of Judge Mariah, who is ostensibly the big draw of the season, and probably the single biggest reason Nigel Lythgoe didn’t tip over one of Jennifer Lopez’s 4,000 dressing room candles and let the whole thing burn?

Kang: Mariah looks like the queen cat in an ASPCA shelter. She’s got that same smug look on her face, the same sense of self-satisfaction that seems to say, “I may be old, I may be mangy, and I’m sure you’d rather adopt Nermal Minaj over there with the marigold hair and the lidless eyes, but you should have seen me play Anna Meowens in The King and I. I was beautiful back then.”

Old cats smell like filet knives left out in the sun. They vomit up weird shit you don’t remember them ever eating. Like yarn. They’re horrible to be around and only loved by middle-aged women who have loved them since their youth. Yes, Mariah Carey, one of the 10 greatest divas of all time, is now your girlfriend’s old cat. The same one you “accidentally” let crawl into the oven.

Old Mariah (who, by the way, just notched a solid three more points in the Diva Scale’s “Weight Fluctuations” category) doesn’t seem to understand that the job of the Idol judge is to be firm, encouraging, and never mean to those less fortunate than you. Instead, she giggles when people are terrible, makes awful faces at contestants, and seems to believe that a person’s intelligence should only be judged by how much they know about the cast of Mean Girls.

All that said, she’s still the most watchable part of the show. Like Britney without the crushing sadness.

Lisanti: I’m not sure what I was expecting out of Mariah, other than “hopefully she’ll offer Kang an opportunity to talk about cats, because a diva-feline communion will be the culmination of a life’s work, and I selfishly would like to see that unfold before me.” Mission accomplished so far. Though I suspect the cat that “accidentally” crawled into the oven is curled up at his feet, resisting his pleas to stop trying to wiggle out of the headphones, this is the last Aretha song of the morning, he swears.

Anyway, Mariah. This panel desperately needs a claws-out, Cowellesque diva, and maybe she’ll take the role and run with it. You get the feeling that she’ll soon be challenged by one of those contestants who’s utterly convinced of his or her musical greatness, and who’ll make the fatal mistake of confronting Carey on her own turf. And she will let loose on that person with the righteous fury of a cornered, still dangerously proud Colonel Jessup, but with 400 percent more finger-waving and head-wagging. The truth will be handled by us all: Don’t fuck with Mariah. She’s got a four-car garage with nothing in it but messy stacks of gold records she’s never even bothered to look at. If she wants to giggle at your overwrought, out-of-key runs, she’s gonna giggle.

Yoshida: Mariah is just J.Lo with a legit legacy and a smidge more self-awareness, so I have no complaints. Was I the only person who thought 90 percent of her Outrageous Diva Antics were just her playing around with the reputation that invariably precedes her? She comes from a generation in which a pop star ultimately has to be a benevolent goddess figure to her subjects — I predict many more auditions where the other three judges have their “No”s down and Mariah claims that she was totally going to say “Yes,” but now she’s already outnumbered so it doesn’t matter anyway. That said, when a contestant comes in and is all giddy because Mariah is her idol, my side-eye from the sofa is not nearly as severe as it was for all the J-Lovers from the past two seasons. If you’re an 18-year-old from Queens who’s wanted to sing your whole life and grew up singing “Fantasy” in the mirror, I have zero criticism for you and your lifestyle. At least until Hollywood Week.

Are we all in agreement that Nicki Minaj is our new favorite, by about a billion-millionty percent? And how fake is the feuding, on a scale from “WWE SummerSlam XVII” to “Lennay Kekua”?

Yoshida: Oh, Nicki. I take it all back. I think she’s poised to be the new Simon Cowell. She might even be better at Simon-ing than Simon because she doesn’t have a producer voice in the back of her head every time she’s on-screen. And she’s not hampered by the hero complex Mariah has, so she has the freedom to be honest, and even visibly impatient and flippant at times. It’s part of her brand; nobody expects someone who has rapped about “shitting on your whole life” to have the best bedside manner on a talent show. Which made her moments of kindness, even during the cringey Robert Bae audition (MORE ON THAT IN A MINUTE, DON’T WORRY!) even sweeter by contrast. But yeah, every time a flailing auditioner asked to sing a second song and Nicki declined without missing a beat, I wanted to cheer — she has a way of making what could have been ruthless just seem reasonable and prudent.

Lisanti: Full disclosure: I had a fairly light dinner, so the fact that I wanted to eat Minaj’s delicious cotton candy hair for the last hour of the show might have affected my feelings toward her performance. Her batshit theatricality is going to be fun; every time they cut from a contestant and back to the judges’ table, we could be getting anything: a three-foot fauxhawk topped with Jack in the Box antenna balls, a neon-pink peacock fan with a giant Eye of Sauron airbrushed on it, a crystal-spangled Darth Vader helmet that plays “Superbass” whenever she snaps her fingers. It all makes Demi Lovato’s experiments in seafoam seem like quaint dabbling.

But I hate the way she’s giving us hope. We all know how this ends: with 6,000 more audition shows, 380 Neil Diamond theme weeks, and the inexorable elimination of every genuinely talented person by a nation of tweens desperate to crown this year’s Boy They Want to Hold Hands With. Fool me six consecutive times, shame on me. That Phillip Phillips song is still pretty good, BTW.

Kang: You know when there’s a hit TV show featuring a bunch of complainy white people and someone invariably writes a “think” piece asking for more diversity on said show? Well, I never have that problem with Idol because I know that nine times out of 10, whenever an Asian person walks into the audition room, it’s going to Nanking all over again. Last year, Heejun Han gave us a nice reprieve from the William Hung–ing of Asian America, but it stands to reason that the show’s producers would feel the need to follow up that nice moment by belittling two Asian people who — HAHAHAHAHAAH — DON’T SPEAK GOOD ENGLISH!

That would have normally been enough “Laughin’ at Minorities” for a typical Idol premiere, but then the producers brought on a Sikh contestant who called himself “The Turbanator.” I have some advice for you, Turbanator: Just don’t. Seriously, man, just don’t. I know it’s hard to make friends because people are such racist assholes, but don’t play up stereotypes for Randy Jackson, of all people. That guy has the emotional and intellectual depth of a Chipotle. And when Randy Jackson asks, “Hey, you’re Indian, why don’t you do some Indian singing?” please don’t take the bait and desecrate thousands of years of culture.

Yoshida: I miss Heejun so bad, guys. I only stopped following him on Twitter like, two months ago, it’s been a long good-bye since last May. Was he the greatest singer? No, but he had a great personality for Idol, Phillip Phillips’s sweet friendship with him didn’t not help him win, and above all else, it was such a big step forward for how Asians are treated on the show.

Bae and Chang were unfortunately back to being pretty par for the course (does Simon Fuller think that anyone is surprised by now when an Asian person turns out to be not very good at singing on American Idol? What’s the thought process there — “This outrageous audition is sure to set Xanga on fire”? Is there a reason these bits always seems to make it into the final cut?), but the Turbanator thing was some next-level idiocy. Maybe they figure that Idol is such a big, warm, welcoming place that of course in 2013 we can all have a progressive chuckle about some Sikhs, even going so far as to After-Effects-in some red demon eyes and aim his infrared crosshair vision at “Keith Turban.” I guess they figure they have license to be “equal opportunity offenders” (sigh) after putting a dog head on Randy Jackson (cuz he says “dog” a lot!) in that truly high-concept “No. 1 Idol fan” dream sequence. Ugh. The worst.

Lisanti: The Bae/Chang/Turbanator trifecta had to be a new low on a show that seems obsessed with finding a new William Hung every single year. They’re so tone-deaf to this stuff that they took the fact Gurpreet actually said the word “Turbanator” as license to build an entire idiotic bit around it. (Really, it’s something of a miracle that Seacrest wasn’t wearing his own “hilarious” turban when the guy emerged with his golden ticket.) Why just let that moment go and get on with the singing, or gently turn away the obviously talent-free James Baes and Albert Changs, when you can fill a couple of minutes with laser turbans and sweet, clueless kids who struggle with English?

I do have to admit that I kind of liked the part where Randy Jackson had a dog’s head. He’s The Dawg, dawg! WOOF! (Also, by then I had eaten a bowl of dry egg pasta, confectioner’s sugar, and orange Pine-Sol in an attempt to ease the cravings brought on by Minaj’s hair. I continued to see dog-headed people for the next five hours.)

Any contestants worth getting excited about at this very premature moment, and who will likely reward our interest with a quick flame-out in Hollywood Week?

Kang: God, no. Oh, wait, I liked that Freddie kid who sings in the subway.

Yoshida: Freddie was great! And he’s got a nice mom, which I will always take over the faceless hordes of extended family members armed with glitter and poster board. I also liked rapping blueberry girl, because as far as the best one-line reality show intros of the year go, “I work on a blueberry farm” is surprisingly strong competition to “I was born with one arm.”

Let’s also put Ashlee Feliciano through to the Top 8. They saved her for last for a reason:

Lisanti: Each and every night, Keith Urban lays Nicole Kidman down on a bed of warm marshmallows, rose petals, and cashmere teddy bears, whispers sweet nothings in her ear through a studio-quality windscreen, and then rubs her feet through a pair of silk boxing gloves coated in exotic oils. The lovemaking can wait, because just spooning up behind her right now in his Tempur-Pedic bodysuit is intimacy enough.

Kang AngstWatch
9:38 p.m. PST: The e-mail time stamp on Kang’s first official, desperate plea of the season to be mercy-stabbed in the testicles.

Is Shira Gavrielov, who boasted of a no. 1 single in Israel, a ringer?
You make the call.

Now that Nicki, Mariah, and Keith have arrived and new life has been breathed into a slowly dying franchise, Idol‘s on its way back to the mega-rated big time, right?

Uh-oh: The premiere is down 19 percent from last year. Don’t call off the undertakers just yet.

Overplayed Song of the Week: The Lumineers, 'Ho Hey'