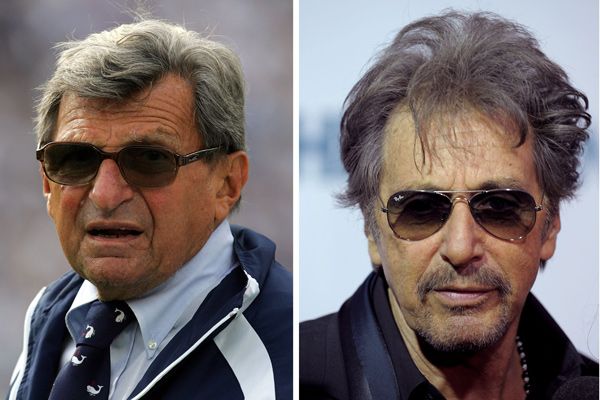 It’s actually happening: Deadline reports that Al Pacino will play Joe Paterno in Brian De Palma’s Happy Valley, a project Pacino had been attached to since September. Joe Posnanski’s Paterno has been optioned for the project, and Dave McKenna — whose credits include American History X and Blow, but also S.W.A.T. and a video game called Scarface: The World Is Yours (whaaat? This dude is amazing) — is writing the screenplay.

So: Do we trust Pacino and De Palma to handle the soul-crushing Jerry Sandusky story? As we are now contractually obligated to mention, Al and Brian did Scarface together, which, at least according to MTV Cribs, is the best movie ever made. But that was 30 long years ago, a span of time that — as much as I ride for De Palma’s Snake Eyes and Pacino’s understated work in Jack and Jill — hasn’t necessarily been kind to the talents of our titular heroes. De Palma, in particular, seems to be doing a bit of career flailing: He’s coming off Passion, which nobody saw even though the trailer made it pretty clear that Rachel McAdams and Noomi Rapace have sex in it. Then again: Pacino already played a football coach once, in Oliver Stone’s loopy Any Given Sunday, and that’s a goddamned cable classic right there.

Another big question: This is a Sandusky movie, right, not a Paterno one? I mean, it’d be downright bizarre to make a movie called Happy Valley so soon after the scandal, and focus instead on the halcyon early days of Joe at Penn State. But the Posnanski book is a biography, one that Paterno agreed to cooperate on before the scandal broke and, according to the New York Times, it’s “breezy and largely sympathetic. It doesn’t contain … any especially startling revelations about what Paterno knew and when he knew it.”

There are some interesting details, though:

Mr. Sandusky and his wife adopted six children, and knew many more through their charity, Second Mile. Mr. Sandusky always had kids buzzing around him, even when there was Penn State work to be done. Mr. Posnanski says about Paterno’s reaction: “The kids annoyed the hell out of him.”

And of course, the book’s just been optioned; it doesn’t mean McKenna has to use much of it in his script.

OK, one more question: Who the hell’s gonna agree to play Jerry Sandusky?