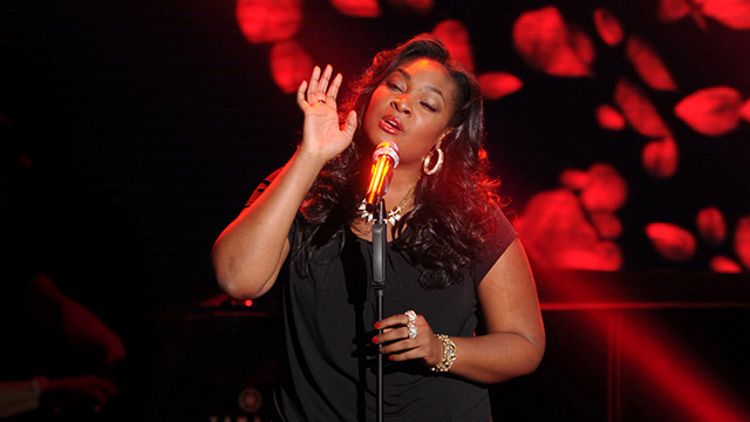 Whatever doesn’t deafen you makes you stronger: Grantland’s Jay Caspian Kang, Mark Lisanti, and Emily Yoshida have returned, bowed but not broken, to tackle another season of American Idol. This week: More positivity! And more Mariah!

Candice’s “Lovesong”: One of the greatest Idol performances of all time, or do people have short memories and just love to declare things the best ever?

Candice restored my faith in Idol for at least a few hours. I rewound and rewatched her performance three times and it kept getting better. I don’t know what she’s going to do after she bows out in third place, but I hope she just hightails it over to Broadway, where she can exercise the full range of her pipes. She’s one of those singers who just knows where to emote in songs and I just can’t see that sort of stuff really translating into modern R&B, which, of course, is exactly what the recording industry will probably try to do with her.

Yoshida: Candice’s “Lovesong” was ridiculous. I’d put it just under Haley Reinhart’s “Bennie and the Jets.” (What?) There were a lot of grumblings last week that the judges faked their Top 3 picks (Candice was conspicuously absent from all four), and after last night’s otherworldly performance, it seems like even more obvious fodder for a comeback narrative. Which is ab-SURD, because it means the producers think (a) anyone would buy that Candice has anything to come back from, and (b) nobody would just want to watch a young woman with a phenomenal voice be consistently awesome every week and knock every song out of the park and have everyone love her. I want to watch that! If Season 12 of American Idol was just a weekly 15-minute program in which Candice Glover slays a song and then Nicki Minaj tells her how much she loves her, in-between syndicated episodes of The Big Bang Theory, I would … well, I’d probably be a lot more professional and thoughtful in these recaps.

Lisanti: This is usually the point where I trot out Kat McPhee’s “Over the Rainbow,” which I’m only half-serious about, and which I’m half-suggesting just to make certain people erupt in rage. (It was really good! It got her second place and a terrible, terrible show on NBC!) Candice’s performance was incredible. Truly incredible. It was so good, in fact, that we’ve all probably already forgotten that weird interlude where she went Melanie Amaro [Editor’s note: Melanie Amaro was a contestant on The X Factor, a show even less watched than this incarnation of Idol.] on us and busted out her secret patois. But I just feel a reflexive need to reality-check Randy when he’s temporarily roused from his 12-season malaise to declare something one of the greatest performances of all time. He was the bassist for Journey. He’s seen things. Take it down a notch, dawg; let’s maybe not have an aneurysm over one excellent performance. You were probably in the room when Steve Perry gleefully dove headfirst into a mound of cocaine like it was a pile of freshly raked autumn leaves. Act like you’ve been there before, with the cocaine.

Does this look correct to you?

Kang: No. Not at all. It goes: Candice, Amber, Angie, Janelle, Lazaro, and Kree. Why anyone would put Kree no. 2 is completely beyond me. She dresses like Danny DeVito, and because all discussions in this space always turn into what the contestants would be like if they were in high school, let me tell you that Kree was the girl in your English class who contributed too much to the discussion, but never quite grasped basic concepts like “What’s the difference between a simile and a metaphor?” At the end of the school year, she asked the teacher if she could write her final paper on how the Indigo Girls’ “Closer to Fine” saved her life. She probably got an 850 on her SAT and then talked at great length about the stupidity of standardized tests. You had a point, Kree, but there was no amount of un-standardizing that would have saved you. The test prompt could have been: Express your feelings about the first time you smoked a cigarette. Here is a crayon and some pipe cleaners, and you still would have failed.

I hope she goes home before Lazaro. She might be a better singer, but she just radiates this horse-stupid seriousness that I can’t handle anymore.

Lisanti: As much as I love Angie, I somehow only ranked her fourth. Excuse me — Disembodied Anonymous Recap Question-Asker only put her fourth, and he/it was as surprised as anybody that that’s how it seems to shake out now. Though we probably suspected it after her Colton Dixon cover a few weeks ago, we know it for sure after last night’s “Love Came Down” by Kari Jobe: She wants to be a Christian artist. Which, you know, good for her. She can dominate the megachurch circuit with Colton and everyone’s happy. Release the hologram doves!

Yoshida: Just switch Kree and Amber and we’re good. Though, keep in mind, the only people that are actually great anymore are Candice and Amber, and at this point not even some late-game Crucifictorious fangirling will buy my thoroughly hypothetical vote.

Lisanti: I don’t even believe the Kree thing anymore. Amber’s ahead of her. I guess I got too excited about Keith unilaterally inducting her into the Grand Ole Opry. An understable mistake, that’s incredibly exci — [Falls asleep.]

What was more brutal, Lazaro’s performance or the judges’ totally correct pummeling of him?

Yoshida: This was when I really wished that the panel was made up of four Nickis Minaj, because instead of having to sit through three people tiptoeing around and talking about Lazaro’s “story” and how if he “couldn’t follow” a “key change” he “might” have a “problem,” the first Nicki would go “No, seriously, that was terrible,” the second would let loose with a great Muppet belly laugh, and the third would boo herself in a British accent. The critiques were most definitely more brutal, because Lazaro was only slightly worse than he usually is every week (so: basically unlistenable) and the judges tripled down on patronizing bullshit. I’d be pissed off if I was Lazaro, but maybe he’s the kind of kid who doesn’t care if he’s getting by on pity.

Lisanti: I don’t think I’ve ever seen a worse performance on this show. And I don’t think I’ve ever seen the judges go into more painful contortions to praise his courage (“You’re so brave, yada yada yada, holy shit you just made my EARS FALL OFF”) before tearing him apart like ravenous, if reluctant, jackals. By the time they paneled around to Nicki, she was just not having it. Oh, the faces she made while Keith Urban attempted to scavenge some kind of positive from the charred wreckage of the musical immolation they all just watched!

Kang: I am rooting for Lazaro in life. I really am. And because I feel that way, I think he should leave Idol as quickly as possible. There’s a place for him on stage at some cabaret, probably singing “On My Own,” but that’s far, far away from a televised singing competition.

Did you notice that Mariah said more words this week than in the entire season combined?

Kang: I did! And that she was somehow more coherent and less weird and that white dress was the best thing she’s worn all season. Maybe she found the right cocktail of painkillers? Did you also notice she was doing Mariah hand motions during Candice’s songs? If Candice is in the finale, I hope they forgo the obvious Yolanda Adams–y choice and put Mariah on stage with her to sing “Vision of Love” (h/t to Lisanti, who predicted this last week). I don’t think Mariah at this age will put herself on stage with Candice because she probably knows there’s a 25 percent chance she gets blown off the stage (although honestly, she’s still Mariah …), but the hope of that duet is what will keep me watching the rest of the season.

Lisanti: The most interesting part was her admission that the producers had given her a stern talking-to about her inability and/or refusal to actually, um, judge. So suddenly she’s moved toward the front of the judge-train instead of getting to caboose her way through the entire season, which resulted in 400 percent more talking and 200 percent more addled babbling. I kind of loved it.

Yoshida: I was very nervous when she was talking to Lazaro. Every time she’d trail off I thought she was about to punctuate with a nice, inappropriate “dahling” and wrap it up, but then she kept going. It made me antsy and bored at the same time, like the waiting room at the dentist’s, or most horror films.

Yoshida: This may be the first genuinely hard-to-call elimination of the season, but I’m going to guess it’s Janelle, Amber (UNDESERVEDLY, but yeah, what Kang says, it’s like that), and Lazaro in the bottom, with Janelle going home.

Lisanti: It has to be Lazaro. Allowing him to continue, tone-deaf and hobbling around in the Joker’s leisure suit, is a violation of his human rights. Let’s not get Amnesty International involved here, this show is supposed to self-police.