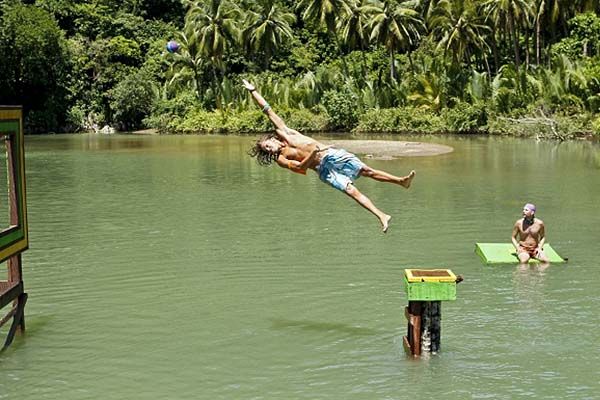 Hey, guys. Nice tribal last night. We really saw some great text (use of the word “operatives” more than once, a “payback’s a bitch” bomb,) subtext (ominous warnings to play any idols floating around,) and a lightning-fast yoink right before the buzzer. That’s how you do it.

Before all of that, however, there were monkeys. Land monkeys, sea monkeys, and tree monkeys. Reynold is happy to be among the remaining fans in Enil Edam, following Corinne’s exit last week, and is grateful for his “ironclad” bro unity with Eddie, Erik, and Malcolm. Every girl they touch turns to snuffed torch dust, but the brotherhood endures. Malcolm is a little more hesitant because Corinne was the only other player who knew he had the idol, but he’s got a stew simmering with his fan dudes and knows it’s time for him to make those big moves he’s been talking about for ages, so he’s chilling. Since everyone’s flirting like they’re in a dim restaurant in The Hills (R.I.P.), Sheppard jumps on the couples cruise and tells Sherri his first impression of her was that she was “hot.” He envelops her in the warm, suffocating embrace of Stealth R Us and dubs her “Tenacity.” They shake on her undying loyalty, then Sherri scurries off to tell the camera how nuts she thinks he is, calling him her new Shamar.

The reward challenge is pretty tame, either because it’s not strenuous enough for my tastes or because the prize is to rappel down a waterfall in pursuit of a picnic. This sounds too challenge-y to be a reward, like winning a marathon in order to climb all of the stairs of the Eiffel Tower and eat eggs Benedict up there. The tribe is split into two groups of five, with Sherri sitting out because nobody picked her (she’s looking a little gaunt these days, so maybe it’s best she rests). Erik, Reynold, Eddie, Cochran, and Michael are the purple people, and Dawn, Malcolm, Brenda, Andrea, and Phillip are team orange; Michael is chosen to stand on a platform and defend a goal against the orange ball tossers while Malcolm blocks his net from the purples. Eddie misses against Malcolm, and Brenda scores one against Michael. Erik ties it up, but Andrea scores right after; Reynold and Dawn miss, then Cochran (?!) nets one, impossibly. Sheppard and Eddie both score, bringing it to 3-3, but then Brenda, shimmying up to the line, misses, so Erik wins it for purple.

Malcolm cheerfully wishes them all digestive problems, “in a good way,” and they march off for more strenuous sports on a steep descent toward sandwiches. As we open on the majestic waterfall, some Survivor music plays with vocals (“Choon Chayadeeee!”) that totally takes me out of it, and I pray they never do this again. Ambient. Keep it ambient. Cochran is not completely feeling the rappelling portion of this reward (“I rarely leave my apartment … I rarely leave Twitter”), so he stumbles down like a zombie in reverse, but of course he loved it (Reynold, also not a rappeller, jumped down like a frog “James Bond”). Sandwiches sandwiches, belching belching (Reynold: “total post-big-win locker-room-guys’ mentality going on,”) blah blah blah. Cochran is sort of put off by everyone “emphasizing the testosterone unity” and vows to never “engage in any masculine tomfoolery with these numskulls,” so I guess he’s still firmly Stealth and not into the idea of joining an all-male alliance. But stay fluid, Cochran. Like water.

The losers are making the best of things by strategizing enthusiastically. Malcolm is looking forward to “scoop[ing] up” the people on the bottom to bolster his numbers, so he goes to Sherri and Dawn to recruit them into his new alliance. Dawn immediately identifies him as “a problem” and decides to trick Malcolm into believing that she’ll vote with him while secretly scheming to take him out. Well, not secretly — she gets Andrea, Phillip, and Sherri onboard, too. Together they decide to convince Malcolm that they’re splitting the votes between Eddie and Reynold before pushing him out to sea. Speaking of sea, that’s where Eddie and Andrea are canoodling on a rock, and we get a nice dissolve where Eddie seems to swim into his own crotch, so thanks for that. They’re dating, apparently, or “island dating,” which means they sit around and “indirectly hit on” each other while playing mind games about how to vote. Andrea asks for the insider information on Malcolm, then softens her approach (“I like you!”), Eddie hopes she’ll drag him along for two or three more tribal councils before throwing him to the wolves, and, finally, Eddie decides not to disclose that Reynold has the idol. He must have read The Game.

This immunity challenge is fixing to give me nightmares: Everybody gets trapped under a grate and waits for the tide to rise and drown them unless they make “some sort of snorkel” out of their trembling fists. Just playing with your panic reflexes; that’s all. We’ve seen it before in Micronesia, but it’s always freshly terrifying. With scary music and serious Probst narration, everybody makes it an hour before the one-inch opening they have to breathe through the grate starts to seriously fuck with them. Sheppard is out first, followed by Sherri, Erik, and Dawn after a brief but impassioned struggle with her own will to live. Malcolm and Michael are next, then Eddie, Cochran, and Reynold (within seconds of each other), leaving Brenda and Andrea to duke it out. They both have their legs draped over the grate, which I guess is the trick. Andrea fights it — and at this point I screamed at my television, “No! She’s going to die!” — but has to give in, so it looks like Brenda is the victor. She’s in such a zone that Probst has to send Eddie underwater to grab her and bring her up to the surface.

Andrea and Dawn work over Malcolm after the challenge, with Dawn really pulling out all the tricks in her actor’s toolbox: covering her eyes with her hands and Stefoning, she’s working like the rent is due tomorrow — then again, she knows the fact that he trusts her at all shows “he’s not dialed in.” This proves true when Malcolm agrees to get Reynold to show her his idol. Rey does, but he does it in a really dickish way, commanding her to “not screw [him]” and saying that he’s prepared to use the thing if he doubts her at all. Dawn’s not impressed by his etiquette, and shames Malcolm for trying to get her into his rude alliance in the first place. Eddie wants to pull Andrea aside for another intimate discussion on a log, but Reynold warns him not to trust her, floating the idea that they get rid of her entirely and “just bro down with the guys until the end.” Undeterred and punctuated by a giant-eyed lemur, Eddie tromps off with Andrea and they power-struggle for a while, each trying to get the other to say who they’re voting for, until Eddie insinuates that Reynold has the idol and might play it during the vote. Then he tells her that her name has been floated around as the next to go, and she freaks out, panicking to camera that she “has to change everything up,” though she obviously doesn’t want to. Andrea’s version of changing things up is to vote for Michael, who’s the most dispensable player because he’s spent most of the game as a floating fan, and tells Cochran and Dawn to follow suit. Cochran is “turned off” that she’s ditching a bold and “aggressive” move, but Dawn is positively steamed. She promises Andrea that Malcolm doesn’t have an idol (he does, but nobody else knows that) and rubs her face, cries, and is generally plaintive and hysterical. So worried about Dawn. That mom needs a trip to the massage chair at the pedicurist’s. She’s disintegrating before our very eyes.

At tribal council, while Probst asks Michael if he has new hope after seeing favorite Corinne book it out of the game last time they partied ’round the flames, Erik picks crawlies out of Andrea’s hair. Sheppard launches into a long ramble about how Stealth R Us was born during “Season 22 Survivor, Redemption Island,” and introduces Sherri as its newest member, Tenacity. Sherri, the only fan on Stealth, feels pretty smug about that and informs the rest of the fans that “payback’s a bitch” because they’ve tried to flush her. Eddie strikes back that he’d rather play his own game than be a puppet or in a “little league of operatives,” forgetting that he’s totally Reynold’s sidekick and isn’t exactly a strategy-brainstorming machine. Reynold calls them the “three new kids on the block” against Stealth, which leads Probst to inquire about the powers of an idol on either side. Sheppard, who’s an overtalker, informs everyone that “if we think you have the idol, you will be voted for” and that any big moves at this point would just result in that person being “flushed out, goodbye.”

Very intense music plays during a very intense vote, with Malcolm voting for Reynold because he’s kind of shaken by Sheppard. Probst asks for idols and Rey stands up, but then Malcolm stops him and says, “They all voted for me. You can tell; that’s what that whole story was about,” and asks for Reynold’s idol. Either he didn’t bring his own or he’s just being an opportunist because he knows that Reynold, Eddie, and Erik are all hypnotized into believing that they’re “unwaveringly trustful,” as Reynold said, of each other. Why use your own idol when you can take someone else’s and send the message that you don’t have one, when you do? Reynold agrees — he agrees! This is what separates the fans from the favorites! — and Malcolm plays his ill-begotten idol, but it turns out that Michael’s out and becomes the first member of the jury (I’m really sad that Corinne didn’t make the cut, because she gives great jury). Stealth is still going strong, though Malcolm’s blown his cover, and I’m sure that’s going to come bite him like one of the tiny spider monkeys that fly off the trees up in this joint. Michael exits with a “You turkeys!” and a raspberry blown in Enil Edam’s general direction (again, Corinne, wish you were here). His post-exile snippet mentions wanting to go “far and deep” into the game and a pat on his own back for “playing hard and strong.”

Next time?!: Dawn alienates everyone by being a little brown paper bag of a person, bawling seaside, “acting like a lunatic” who’s definitely “losing it,” and threatening to pull herself out of the game. Hang in there, Dawn! Keep those soggy eyes on the prize! Now off I run to see if I can astral travel back in time to when this season was shot to cast a spell on Cochran, making sure he wins every immunity challenge from here on out. Did you see our indoorsy friend holding his breath under that grate? Maybe we got a contender there. I’ll meditate on these amethyst crystals and try my best.